NaBloPoMo # 18: Everything I Ever Needed To Know About Searing Pain, I Learned From A Lego

I went to the doctor once, when I badly sprained my wrist. As she carefully examined me, she asked "What's your pain level like?" I mused on that a moment and she added, "You know....on a scale of 'I'm drinking a glass of wine on the beach' to 'I just knelt on a Lego'".

Any parent reading this just instantly cringed.
Several family members bought my son Lego Hogwarts last Christmas, along with the Lego Quidditch Pitch, Lego Hagrid's Hut and several Lego Star Wars characters and accompanyments. It is now a year later, they're all in pieces, and I've had half of them embedded in my feet at some point or another.

It's enough to make you cry. And it does. It does a lot. 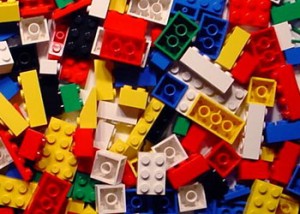 I don't know how many little pieces I've thrown away, how many storage bins I've invested in, how many times I've shrieked like a circling harpy and him and his sister to put them away, they find their own way out at night, stealth-ninja-ing themselves on stairs, in doorways, in front of couches and even in the shower stall (I think the fact that we have a kitten played into that one. Not sure, though).

I believe they're alive. And they multiply.

I have a new plan for homeland security. Surround any major potential terrorist target with a field of Legos. Line the roads in Afghanistan with them so our troops can drive them safely, without fear of anyone walking even remotely near to set a bomb or toss a grenade. Instead of waterboarding, put Al Qaeda operatives in a room carpeted with Legos and no chair or bed to rest upon.

Wait. That's probably violating the Geneva convention. I'm sure of it. Amnesty International would have our heads for that one. It's inhuman. Forget I said it.

Don't get my wrong, I think Legos are awesome. I love putting the kits together with the kids, I love looking at the cute little Lego guys and when I was a kid, I even found a way to make a Lego gun that actually shot blocks at my brothers. Of course, this left blocks scattered all over the floor and made my Mom scream at me a lot. Or maybe she was just screaming because she walked across the floor. All I know is she had a twitch in her eye that developed shortly after we got the mega-box of Legos and it didn't disappear till my brothers and I were out of the house.

And I still, to this day, remember the look on my Mother's face when she told me she had sent my brother's three year old a great, big, bin full of Legos.

Thus, the cycle of pain renews itself.

And the world limps merrily along.