Once Upon A Time - Season 2, Episode 5 - A Last And First Meeting 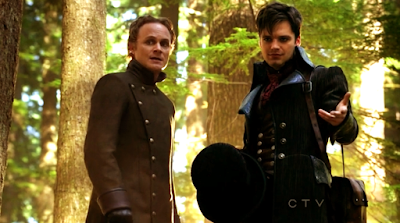 Tonight we rejoin Mulan and company only to find their previous camp in shambles with dead bodies everywhere - all of whom have had their hearts ripped out, courtesy of Cora.

Emma finds someone under a pile of rubble, and we see that ungodly handsome face again...hellooooo Captain Hook! Even filthy and bedraggled, he's eye-candy. And look at him, all cowardly and pathetic and cute. Awwww.


Meanwhile, in Storybrook, Dr. Whale tells David they need to talk and David responds by popping him in the face for sleeping with his wife. Whale wants to know if the rumors are true - portals can possibly be opened and the other realms may still exist. David confirms and Whale answers with "All the lands?"


On the other side of town, we learn that Regina is now seeing Archie, who's helping her overcome her addiction to magic. Whale bursts in demanding that she send him back - but to where? Archie kicks him out and he leaves in a huff. During the session, we also find out that Regina brought not just one dead body (Daddy's) but another as well.

Flashback to the good ol' Enchanted Forest where we see Rumple tutoring Regina. He tells her to tear the heart out of a unicorn, aaaaand....she can't do it. It's innocent and she doesn't have it in her. Rumple rips the heart from it's chest, using this opportunity to explain to Regina (and to the viewers) that in the Enchanted Forest when you take a heart, it doesn't kill the animal (or person) but it does let you command it.

He goads Regina to kill the beast and places the heart in her hand - and she still can't do it. Regina with a soft heart...it's so adorable.

Forward to Storybrooke, where we see Regina, looking down at her beloved Daniel, encased in a glass coffin. She's preserved his body with an enchantment spell. Archie encourages her to let go of the past, and Regina leaves, clearly unable to do so.

A few moments later we see her driving through pouring rain and she sees...Daniel?

The following day, David takes Henry to the horse stables for some bonding time. It turns out Grandpa's bought him a horse so that he can have a proper steed, but don't think he's gonna be some pampered prince, oh no. David grew up a farm boy, after all. He tells Henry he's going to be mucking stalls and brushing the horse down for a while before he can graduate to riding.

Across town, Regina heads down to her vault to find that Daniel's body is indeed gone from its magical coffin.

Flashback to Rumple, spinning away as he's tutoring a very young and uncertain Regina who confesses that she wants to learn magic so that she can bring back the dead. Rumple assures her that magic can't help her. Dead is dead. He tells her he's not going to tutor her anymore.

Jefferson (sigh) shows up out of nowhere to show off his latest acquisition - the crystal ball from Oz, no less, but he didn't manage to get the Ruby slippers. He lets slip that he knows a guy - a wizard of sorts - who can bring the dead back to life. In return for free transport around the kingdom, he'll hook Regina up.

Jefferson also cautions Regina that this wizard dude has never been to our world and is unfamiliar with the ways of magic. He ushers Regina out to a fountain where we meet...Dr. Whale, who prefers to be addressed simply as "Doctor." He's also developed a British accent for some reason, when everyone else retains their normal accents. Hello, continuity?

He tells Regina that the procedure to reanimate the dead is experimental. He needs a magical, enchanted heart - much stronger than any normal human heart. Regina knows that if she removes the heart by magic, it will fit the bill, She balks at the thought of taking an innocent heart. "I will not use magic for evil," she vows.

She takes one of the oh-so-many hearts in Cora's vault and gives it to our mysterious wizard-doctor, and he agrees to try the procedure on Daniel.

Forward to Storybrooke, where she's looking for Dr. Whale and finds him, fading out of consciousness, with his arm ripped off. She gets him to confess that he's brought Daniel back, but Daniel is now (gasp) a monster.

David confronts Regina, who lets him know what Whale has done. She tells David that Whale practices something more powerful than magic - whatever the hell that could be.

She's sure that Daniel won't hurt anyone else. It's possible he may have gone to the stables, since he was a stable boy. David let her know that - of course! - Henry is at the stable.

Daniel shows up at the stables, wild-eyed and in full stalker mode. He tries to attack Henry, then tries to attack Regina when she shows up with David. Regina begs David to let her talk to him, feeling sure she can calm him down.

And now we move back over to the present-day Enchanted Forest where Mulan tells Emma that Hook is a blacksmith and he lost his hand in an ogre attack. Emma isn't fooled by that pretty face. She calls Hook on his lies, putting a knife to his throat and then tying him to a tree and leaving him for ogre meat.


Hook keeps up his pretense for a bit longer, and Aurora's still on his side (don't blame you, Aurora), but finally he breaks. He gives them his true name. He lets Emma know that Cora's got the ashes of the wardrobe and she's after a magical compass. He makes a deal: he'll help them if they let him come along to Storybrooke, where he plans to kill Rumplestiltskin. And there must be no money in the CGI budget - trees are shaking, but no ogres in sight.

Jumping back to the old Enchanted Forest, we see the Doctor in shadows, with lightning flashing all around as he tries to re-animate Daniel's body, only it turns out to be a bust. He comes out to give Regina the bad news.

And we go forward on that bit of heartbreak to Storybrooke, where monster Daniel is trying to choke the life out of Regina. He's got blood all over his hands from God knows what - he hasn't touched anyone but her. He begs her to let him go, but she refuses to lose him again, sure that her love can save him. 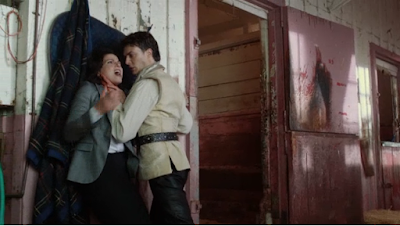 "I love you," she says.
"Then love again," he begs, choking and clearly in agony.
A tearful Regina turns him to dust.

Over in the Enchanted Forest, Emma and Snow realize that Hook is probably playing them, but Emma is banking on the fact that she can outplay a player. Then Hook reveals their next obstacle: a giant beanstalk.

Flashing back once more to the old Enchanted Forest where we see Regina coming upon Rumple, who appears to be training a new protege'. Regina doesn't hesitate, ripping the other girl's heart out and crushing it to dust as Rumple looks on approvingly.

Around the bend we see Jefferson and our good doctor talking to Rumplestiltskin, who set up the whole scene with the doctor, who still has the enchanted heart. He deliberately duped Regina, and the results were exactly what Rumple was looking for: she's so broken, she's now become a monster. 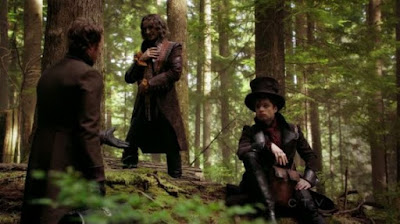 The doctor takes his leave with his happy, enchanted heart.

Forward to Storybrooke, where Dr. Whale confronts Mr. Gold in his shop, demanding that he reattach his arm for him. Whale confesses that he wants to get back to his world to try to bring his brother back...again. Rumple reminds him that the first time didn't work out so well.

Rumple agrees to do it as long as Whale says "it".

"I need magic," Whale spits out.

Then we segue over to a land made entirely of black and white, where the doctor pulls out a glowing red heart, and we finally learn his name: Frankenstein. 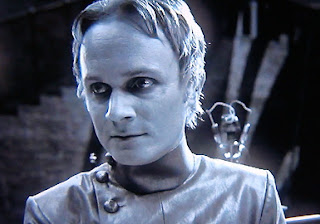 I'll give this one four magical hearts out of five.

I love to see Emma and Hook and the beginning of their very serious chemistry, but God-almighty do I loooaaatthhhe the whole Frankenstein thing. I mean, seriously. I like the character of Dr. Whale, but ugh - Frankenstein??? Really??? Not a fairy tale. Not magical. Not interesting. At ALL.