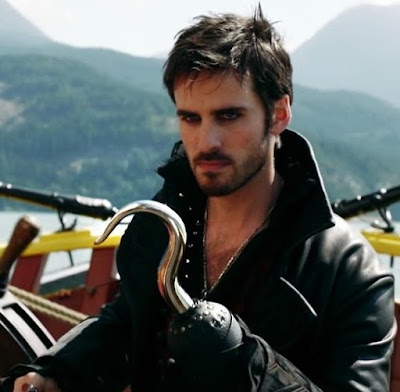 We open this episode with Rumple giving Belle a beautiful necklace. She thanks him for changing for her. Then Leroy comes into the store demanding his axe and questions how Belle could be with such a monster. Rumple goes nuts and chokes the hell out of Leroy and we discover it's all just a movie cliché dream – Belle's to be specific.

She sneaks down to Rumple's basement lair and finds him with his Star Wars action figurines spinning gold and using it for a magic potion.

Flashback to old Rumple back in the Enchanted Forest before he turned scaly, and he's home to find Baelfire all alone. He heads to the local tavern and discovers Milah with an ungodly handsome man who puts every other man at the table to shame. She's laughing and gambling and obviously having the time of her life, and when Rumple pitifully asks her to come home, she mercilessly mocks him for being the village coward. I hate her instantly. When she sees Bae hanging on his father's coat, she leaves, and yup...I hate her more. Poor kid.


Back at the family hovel, it's clear that Mila's just not feeling the love for Rumple that she once had. She doesn't want to stay in that town, she doesn't want to be married to the village coward. Rumple refuses to leave because he wants to give Bae stability. He asks her to try to work things through - for Bae's sake. Mila reluctantly agrees.

Forward to Storybrooke, and Belle confronts Rumple on his clandestine magic. She asks him why he brought magic to town and Rumple tells her that magic is power. She's pretty pissed, and reminds him that courage is what he really needs - and then she walks out.

She heads down to Granny's and makes a fast friend in Ruby (a.k.a. Red), who introduces her to iced tea and pancakes. (And yes, you dumb hillbilly rednecks - it's ICED tea. Nothing makes my eye twitch more than going to a diner and seeing ICE TEA of the menu. Makes me crazy. Wait...I'm off on a tangent, aren't I? Sorry about that.)

Ruby offers Belle a room and suggests she might apply to become the town librarian, since there's no one to take the job.

Back in the Enchanted Forest, Rumple heads down to the dock, having been told that the men from the tavern have taken Milah. He boards the pirate ship anchored there, and promptly falls on the deck - and we get a full legs-up perusal of the ungodly handsome man, who introduces himself as Captain Killian Jones.

As you know, I'm reviewing this season in retro, and damn if he still isn't just as freaking hot in this scene. The first time I watched this, I swear to you, there was no saliva left in my mouth. DAMN.

Rumple begs the captain for his assistance:
"Please..." he pleads, "You have my wife."
Killian raises that devilish brow and replies: "I've had many a man's wife…."

Killian gives Rumple the opportunity to fight for his wife, tossing him a sword. Rumple (who is obviously thinking of the fact that he's all Bae has left) refuses.
"A man unwilling to fight for what he wants deserves what he gets," Killian sneers. Then he calls Rumple a coward and orders him off the ship.

Oooooooh! And now we get to see Charming in a muscle shirt doing manual labor, swinging a pickaxe in the mine as they look for fairy dust. 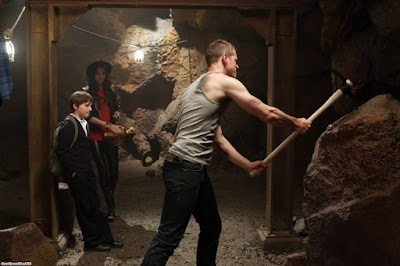 Me like! We also learn that David will be stepping in as interim Sheriff.

Even though they have cameras, computers and photocopiers, in Storybrooke, Rumple brings a badly painted watercolor picture of Belle around to her Daddy's flower shop, looking for her.Moe French claims he hasn't seen Belle since before the curse, and calls Rumple a few scathing names.

Jumping back to the Enchanted Forest again, and a mysterious man in a floppy red hat meets with glittery post-transformation Rumple in a tavern and offers him information on where he can obtain a magic bean. Rumple makes a deal and is about to get up when in walks Captain Killian Jones with his crew, playing right into Rumple's scaly hands.

Forward again to Storybrooke, where we see Belle peeking in the windows of the town library. She's startled by the same red-hatted man we saw with Rumple in the flashback, and now he snatches her off the street.

Flashback to outside the tavern where Killian is mocking a poor, limping peasant, calling him a "Crocodile" due to his scaly, glittering skin. Rumple reveals himself as The Dark One, and Killian's men are suitably scared to death.

Rumple asks after Milah, and Killian explains that she's dead – having died long before. Rumple challenges him to a duel the following day at dawn, and wishes him a good evening – it will be his last.

They meet again the following morning and Rumple takes Killian's sword, determined to kill him with it just out of spite. He employs all the magic tricks in his arsenal to win, too.

(Side note: this scene - and all the others with our dear captain, I might add - are a study in exceptional blocking and stuntwork. Colin O'Donoghue was recovering from a badly broken leg due to a ski accident, and they had to disguise his limp and make it easier for him to stand until a later episode when they could explain his injury. You would never be able to pick out the way he favors his left leg unless you were looking for it.)

The death blow is about to come and is halted by the arrival of Milah, who is very much alive, and as we now see, very much the other half of a Killian and Milah couple. Killian tells her to go – trying to save her, but Milah refuses.

Forward to Storybrooke, where Rumple shows up at David's door with his poorly drawn Belle portrait, asking for help in finding her. He appeals to David on a wonderfully human level, man-to-man as someone who's missing someone he loves. David agrees to help.

The man in the red hat, it turns out, was acting on behalf of Belle's father, who is determined to keep her from Rumplestiltskin. Belle rebels, and Daddy orders her bagged and taken away again.

David, meanwhile is trying to get some help from the townsfolk, who make it clear they don't want to help Rumple in any form, after all he's done. Rumple, quite humbly asks David for dating advice – wanting to know how he managed to win Mary Margaret, even after all they had between them.

David advises Rumple to simply be honest with Belle. He heads into Granny's and Ruby denies knowing anything about it at first, and then comes clean. Ruby then volunteers her wolfy nose and takes off on Belle's trail, leading them right to Game of Thorns (ha!), Belle's Daddy's flower shop.

Belle's dad confesses that he's taking drastic action – sending Belle across the town line to make her forget everything. Rumple gets all badass and David notices the mine dust on Moe French's hands. They head for the tunnels.

Meanwhile, back in the Enchanted Forest, Milah explains to Rumplestiltskin that she fell in love with Killian and she feels gosh-awful bad about cheating on her husband, running off with another guy, and abandoning her son. Really, she does. Rumple is quite understandably unmoved and plans on killing her smolderingly handsome pirate, but Milah offers a deal: she's got the magic bean and will exchange it for their lives.

They all return to the Jolly Roger, where it's clear the Milah is one of the family with the crew, who all defer to her. She produces the magic bean, tossing it to Killian. She then asks Rumple if they have a deal and Rumple asks for the answer to a question first: how could she leave Bae?

As a mother myself, I'm right there with Rumple. Killian Jones might cause my panties to spontaneously burst into flames, but hell if that would ever make me walk away from my kid.

Milah admits she was cowardly and weak and she's sorry. Rumple refuses to take the apology, and when Mila tells him she never loved him, he yanks out her heart and crushes it to dust. With a whispered, "I love you," to Killian, she dies.

A tortured Killian calls Rumple a coward just before Rumple slices off his hand. He decides to keep Killian alive, because he wants him to suffer. Killian attacks him with a hook from the riggings, and as we see him pick it up, we know exactly who he is. He's a f**king God among men, that's who he is. Oh, and he's Captain Hook now, as well.

Forward to Storybrooke again, and the man in the red hat sends Belle careening through the mine shaft, which crosses under the town line, but at the last moment, the car is pulled back by Rumple, who saves her.

Rumple tries to smooth things over and Daddy wants her to come home, but Belle stands firm and tells them both to go piss into the wind. She's living her own damn life now.

Rumple gifts Belle with the key to the library, and as she stands in the middle, looking around at all the books, we get a wonderful Disney boner of a moment.

Rumple appears to tell her that she was right – he is a coward and has been his entire life. He recognizes his addiction to power. He mentions again how that addiction cost him the most precious thing in his life – Baelfire. He admits he crafted the curse as part of his plan to find Bae, but he has to use magic to find a way to get through the barrier around the town so that he can find his son
.
Belle stops him before he can go by asking him out for a hamburger. Rumple agrees that it's a date, and we see a wonderful and tender moment between the two as they try to reforge a relationship under these new terms.

Back one final time to the Enchanted Forest, and we see that Hook has tricked Rumple, keeping the bean for himself. As Milah's body slowly slides into the sea, he orders the man in the red hat brought forward. Killian offers the man a position on the crew and free passage to a new land, where he will find a way to get revenge on Rumplestiltskin. The man introduces himself as William Smee, and cheerfully accepts the position. He asks where they'll be going, and after attaching his new hook, Killian Jones replies with a lusty: Neverland! (Well, it sounded lusty to me..)

We now see Mr. Smee in the basement of Rumple's house in Storybrooke, and Rumple wants retribution for what Smee almost did to Belle. He asks Smee where Hook is and Smee claims he's never seen him in Storybrooke. For some reason the curse didn't take him.
"Where. Is. He?" Rumple demands. 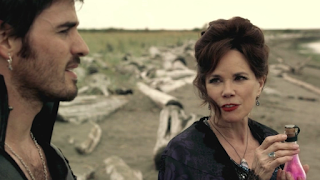 Oh, there he is, looking through a spyglass and talking to…Cora!
She's enlisting his aid in re-activating the dust of the wardrobe. If he helps her get something, in return she will accompany him to Storybrooke, where Cora can be reunited with her daughter, and Hook will finally get his revenge on his "crocodile," Rumplestiltskin.

I'm giving this one five hooks out of five - and that's going to be my preferred method of rating from this day forward, I think.

Killian Jones has entered the universe, and this show will never, never be the same again. Hot damn.