Once Upon A Time - Season 2, Episode 3: BadAssery All Around

This evening, we begin with what looks like a war council, and Snow, Charming and Red are trying to decide what to do about King George. He has a new general who seems to be nigh unstoppable and goes by the shiver-enducing moniker of Leviathan. Oooooh.


They get attacked by George's army, and Charming sends Snow to safety at his mother's house (or so he thinks) only to have her run smack into....you guessed it! Leviathan. She whispers his name in awe and he yanks off his helmet, thoroughly irritated.


"Leviathan?" he says. "That's what they're calling me? It's Lancelot!"

And our meeting with another iconic figure is cut short by the throwing of the trademark bag over Snow White's head (seriously, they bag the hell out of people on this show. Do they use the same bag for everyone? Or is there a special bag designed by the costumer for each character? Inquiring minds want to know).


Forward to present-day Enchanted Forest, where Emma is keeping a watchful eye over an unconscious Snow in their prison-hole. Cora who seems like a sweetie pie, is trying to make friends with Emma when Snow wakes up and warns Emma away. She reminds Emma that she's a stranger in a strange land and Emma gets pissy.
A moment later, they're released from their prison when it turns out the leader of this settlement is none other than Lancelot, who greets Snow like and old friend and is greeted the same in return. Of course, this is because bad isn't really always bad in The Enchanted Forest. We'll get the rest of that story soon.

Aurora isn't too happy to see them so cozy, after all, they brought the wraith that sucked out Philip's soul. Mulan reminds her to tread carefully - they trust Lancelot implicitly.


After a scrumptious meal of chimera, Lancelot explains that this little corner of the world was spared from the curse for some reason. He tells them that leaving is unwise – ogres have taken over the forest. Snow decides to make the trek back to the old homestead with Emma (and Mulan and Aurora) to try and use the wardrobe again and hopefully get back to Storybrooke.


Flashback to Snow, Lancelot and King George in the Enchanted Forest, shortly after Snow was bagged and delivered. George is in his steely-eyed glory, thundering about how he lost his true son, and now he's lost Charming to True Love (which he says like an epithet). George tells a story about how his wife drank a potion that kept her from having children, and Snow realizes with horror he's just done the same to her, cursing her and Charming into a childless union forever.

Meanwhile, back in Storybrooke, Henry involves his grandfather in operation Scorpion – the mission to find Emma and Snow. David tells Henry he's found Jefferson, who has refused to help them with the hat. David also won't let Henry help – he wants to keep him safe. Like that's going to work. 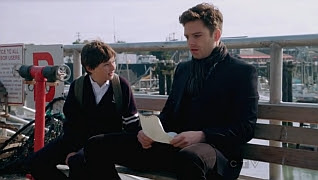 Henry confronts Jefferson, telling him he has to help them, and he has to reconcile with Grace. Jefferson is writhing in guilt because he left his daughter in the first place – he feels that Grace could never forgive him.

"Not knowing is the worst," Henry says. He encourages Jefferson to reconnect with Grace before he steals Regina's keys, planning to go to the vault and look for some magic to help his family.

Flashback to the Enchanted Forest and Lancelot coming upon Snow after George's soldiers dump her in the forest. He feels terrible about what the king did. He lets her know that George has dispatched guards to the cabin to kill Charming's mother, Ruth. We then see Charming encircled by men with swords and crossbows, and like a total badass hero he says 'What? That's it?"


He kills them all dead, dead, dead, but mama Ruth couldn't resist taking a peek out the door and gets a poisoned arrow to the chest for it. Snow arrives with Lancelot just a little too late to help. David suggests Lake Nostos, because it's waters saved the guy who turned to gold, so off they go. Along the way, David asks Lancelot about his backstory, and Lance admits it involved a woman. This would probably be important if we were to see him again. Please let us see him again. He's nice to look at.

And now we go forward to the current-day Enchanted Forest, where Snow explains to Emma that ogres are blind and hunt by sound alone, She then tries to get Emma to be a good little girl and hang out with Aurora while the real badasses find some firewood. That goes over about like you think it would.

Aurora tries to hold a knife to Snow's throat. Snow flips her on her ass with a firm "Listen to me, Princess!" Mulan shows up to protect her bae and Emma shows up like a redneck asshole and fires her damn gun off. This, of course, draws the ogres, and Emma finds herself face-to-face with one who's about to eat her. 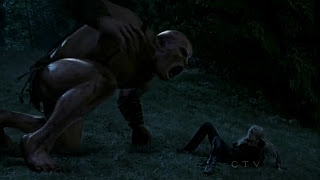 She gets her gun slapped out of her hand and a blast of nasty ogre breath just before an arrow lands right in his eye. Right in his dang eye! It begins to dawn on Emma that her mother is, in fact, a badass.
Back to the old Enchanted Forest again, where Ruth and Snow are bonding beautifully. Ruth twists Snow's internal knife by talking about her someday grandchildren, and offers Snow a pendant that was spelled by a gypsy. If the pendant swings north/south it’s a boy and east/west is a girl. Snow takes the pendant, and of course, it doesn’t swing at all because she can't have children. Ruth tries to cover nicely, but she can see Snow's pain.


Snow lets her in on her terrible secret, and Ruth reminds her that the water from Lake Nostos healed her, and it can certainly do the same for Snow. But alas, they get to the lake and it appears to be dried up, thanks to Charming's killing off of the siren who guarded it. Lancelot manages to find a seashell with a tiny bit of water left in it, only enough for one swallow. Ruth wants Snow to have the water, but Snow refuses. Ruth replies with this episode's core lesson: "That's what parents do. They put their children first. Someday you'll understand."


David gives Ruth the water, but it doesn't seem to be helping. Ruth commands David to stop frantically digging at the lake bed. "My only regret is that I won't live to see you marry Snow," she says. But it turns out that a member of the Round Table has the power to perform a wedding. Lancelot somehow whips up a flowered arch out of nowhere in record time, pours them a cup of wine and officiates the ceremony. Ruth watches Snow take her drink and kiss David, and then she gently passes away.


After burying his mother, David tries to hand Snow the pendant, which is now, surprisingly swinging. Snow looks at it in wonder and then confronts Lancelot, who, in accordance with Ruth's wishes, took the water and put it in the wine for the ceremony. He asks Snow what the baby's going to be.
"A girl," she says with a radiant smile.
Flashing forward to Storybrooke, Henry goes down to the vault and you can creepily hear all the hearts beating in their little cases as he approaches the wall. Next, he finds an old box and opens it, releasing the double-headed serpent of Agrabah and nearly gets bitten before David shows up to shut him down. Henry tells David he should be there with them, riding horses and learning how to swordfight and Prince and stuff. David agrees to let Henry help.
Over in the Enchanted Forest, Snow and Emma have arrived at the castle. Lancelot shows up, claiming that he heard about he ogre attack and came to check on them. He tells Emma she needs to get back to Henry, and Snow immediately draws her sword because there's only one person Emma told Henry's name. Cora poofs up in front of them, admitting that she killed Lancelot, and attacks both of them.


She pins Snow to the wall, but Emma's behind her back, hastily clacking flintstones together and setting the wardrobe on fire. Mulan shows up and Cora beats feet out of there, as the wardrobe burns to the ground. Way to go, Emma.

Mulan says they have to get back to the island and defend what's left of the kingdom. She names Snow as their new leader, and Aurora is on board, too. Emma is finally realizing that Snow was a badass queen who gave up everything for her.
"I'm not used to someone putting me first," she sobs.
"Well get used to it!" Snow says. And then we get our hearts broken as Snow takes one last look at the nursery, remembering how it looked before, and the quiet coo of a baby echoes in the background.

Cora shows up after they leave and takes the ashes of the wardrobe, surely for no good purpose.
Over in Storybrooke, Jefferson watches Grace get off the bus and finally calls her name. Grace runs to his arms and the look on his face is all we ever need. 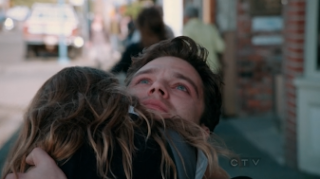 Another happy ending, courtesy of the son of a savior. Henry looks on as David shows up with a couple of wooden swords.


"You're the grandson of a prince," he says. "It's about time you learn to use a sword."
They begin sword fighting, leaping on benches and having a blast as….oh, it's George! He looks on from his car, in the distance. King George is in Storbybrooke!!

I'm giving this one five beating hearts out of five for the emotions in this one.

We had childless Snow, heartbroken Jefferson, dying Ruth, nostalgic Snow, Mama Snow, Jefferson reunited with his beloved daughter, and grandpa badass teaching Henry how to be a prince. The feels were strong in this one.
By Ellie DeLano - October 14, 2012