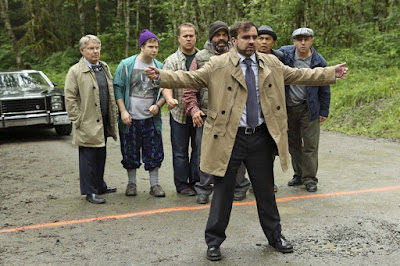 We begin tonight's episode at the town line with the dwarves, who spray paint the border to test out whether or not they can cross the line without anything bad happening. They draw straws and poor Sneezy loses. He steps over the town line and promptly forgets everything but his cursed memories.

Meanwhile, the center of town looks like a war zone. When the curse broke, it apparently came through like a tornado, overturning cars and creating all kinds of chaos. We pan through town and see they've set up a disaster center of sorts, trying to reunite families.


On the other side of town, David shows up at Regina's house, and he wants information about Jefferson's hat. He lets her know that he knows that her magic is iffy, so she'd better work with him because she's only alive because Henry wants her that way. He also expresses his misgivings about her as a mother and Regina sasses back:

"Forgive me if I won't listen to a childcare lecture from a man who put his daughter in a box and shipped her to Maine."

"I don't have magic and I don't have my son. When I get one, I get the other," she warns.
"If you have to use magic to get him, you don't really have him," David retorts.


And that line sets up a perfect flashback to young Regina, trying to get away from her Mother, but to no avail: Cora traps her with magic vines. Regina begs her to let her go. She doesn't want to marry a king. She doesn't want power. She wants to be free.


"Power is freedom," Cora assures her, with that bone-chilling, ingratiating smile.
Flashing forward to Storybrooke, and chaos takes over the town as everyone's looking for everyone else and they desperately need a leader. Cue Leroy, arms waving and heart palpitating: 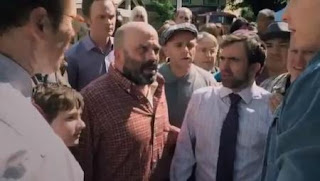 "Terrible news! Terrible news!" he screeches.He lets everyone know that once they cross the town line, they lose all but their cursed memories.
"We thought the curse fixed the border thing," someone remarks.
"If it did, would I come running in yelling 'Terrible news?'" Leroy snaps back.

People get into an uproar and David gets princely and tells them he's got a plan. The trouble is - he's clueless.

Back in the Enchanted Forest, we see young Regina pleading with her father to help her - Cora is making her crazy, trying to turn her into a mini-me. "How did she get like this?" she asks.

It turns out the Mommy dearest was trained by none other than Rumplestiltskin, who conveniently provided her some kind of spell book.

Forward to Storybrooke where Regina shows up at Gold's shop demanding the book. She needs a shortcut to get her magic working because she doesn't have time to keep practicing. He tells her to leave - please - and she's thrilled to find out that Rumple's "pleases" no longer have their effect on her.

Regina tells Gold she knows he's working on an ulterior motive and he gives her the book with a warning, regarding the power of the spells inside.

"I don't care if they turn me green," she says, (in a lovely bit of foreshadowing).

Back in the Enchanted Forest we see young Regina steal the spellbook and call Rumplestiltskin, who's more than happy to show up.

Rumple offers to give Regina a mirror that's a portal to another land. All she has to do is push her mother in and her problems are solved.

Meanwhile, in Storybrooke, Henry recognizes the battered hat, and Henry tells David it's the Mad Hatter's hat - they just have to figure out who the hell that is.

Gold is packing roadmaps in a bag when David shows up to let him know there's a problem crossing the town line. He wants something along the lines of a locator spell. Gold gives him a vial, telling him to pour it on the object and it'll lead him to the owner of the object. In return, he asks David to leave him alone and not interfere. David lets him know that crossing the border destroys your memory, and Rumple goes bananas, trashing his cases in fury.

David puts the spell on the hat and off it goes, flying and bouncing down the street, coming to rest on a tipped-over car that has someone trapped underneath. He reaches in and digs Jefferson out, demanding that they talk.

Jefferson tells him he can't help him and that Snow and Emma are definitely in the Enchanted Forest, because it still exists (despite what Regina says). Jefferson takes off after spouting his madness about having two lives stuck in his head. Red stops David from giving chase, reminding him that he's got an obligation to lead the town out of the current state of chaos.

Across town, Granny has her crossbow at the town hall, where Regina shows up, strutting in and ready to take them all down. Regina tosses Leroy and Archie around, lobs a couple of fireballs, and Henry realizes they're all in jeopardy if he doesn't go with her, so he does. Once he gets to their house, he immediately tries to escape, and Regina stops him with the very same tactic her mother once used on her. 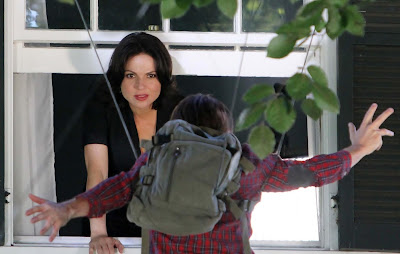 Henry tells her he doesn't want to be her prisoner. She tells him she's got magic now and she'd be happy to teach him and life will be sooooo cool now.

Meanwhile, David intercepts everyone at the town line, letting them know that they'll lose all their memories if they cross over. He gives a wonderful inspirational speech about how they're all the product of both of their lives. They are both. They can embrace both. 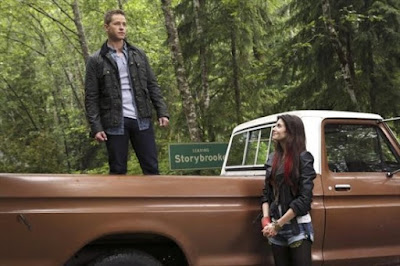 He vows to protect them all, and urges them to come together, as they once did, and the people give a murmur of approval, and turn around to go back to build a life in Storybrooke.

Flashback to young Regina, showing her mother the enchanted looking glass. "I was hoping for something more personal. I wonder if the people really love you," passive-aggressive mumsy remarks. Cora tells her the king is not a strong man, and soon, she can take over the kingdom, with mommy at her side.

"You're stuck with me forever, darling, because I know best," Cora croons, and Regina breaks free, shoving her through the portal. Then she tries to get the hell out of dodge now that Mommy's gone. She tries to give the book back to Rumple. He asks her how it felt to use magic to break away from her mother. Regina tells him she won't use it again, because she loved it. It's pull on her frightened her.

"Someday...you'll do something for me," Rumple says, offering to teach her based on that future payment.

Moving forward to Storybrooke, David shows up, sword in hand to rescue Henry. Regina orders Henry downstairs. She tells David to sheath his sword and then turns with tears in her eyes to tell Henry he needs to go home with David.

"I don't know how to love very well," she confesses, putting Henry first and for the first time in a long time, doing the right thing for the right reason.

She stands alone in the doorway, watching them go, as businesses all over Storybrooke open up, and people begin their lives over again.

Later that day, Henry tells Marco that August is at Granny's but by the time Marco gets there, he's gone. We get an incredibly poignant moment when Marco picks up Pinocchio's hat, and holds it to his chest. It's clear he'll never stop looking for his boy. 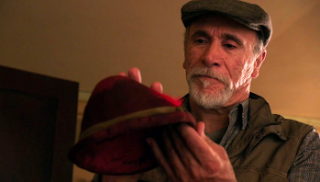 Mr. Gold, on the other hand, stands at the town line, pissed off and pensive. He clearly wants out of Storybrooke - but why?

Regina starts to burn the spell book, but changes her mind, and locks it away instead, still not able to give up her magic, despite all the havoc it's wrought. David tells Henry that Emma and Snow are still alive, and in the Enchanted Forest - he just has a feeling about it.

And to end the episode, we go in real time to the Enchanted Forest, where we see Emma and Snow bound and being dragged along by Mulan's horse to the refugee camp. Snow attempts to get away, but gets knocked out by Mulan. They're thrown into a pit prison, with one other occupant, who steps out of the shadows, offering to help them. I'm going to give this one three spellbooks out of five.

I really enjoyed Regina finally putting Henry first, but I would have loved to see more Emma and Snow and definitely more Mulan. Storybrooke stuff is all well and good, but give me the fairytale forest any day.