Once Upon A Time Season - 2 Episode 1 Recap: Morning Breath Does Not Stand In The Face Of True Love's Kiss We open our new season with a song that quickly wormed it's way into my brain and took root and now will be forever associated with this show: "Charlie's Girl" by Lou Reed. I'll even confess that I have it as a ringtone. And my alarm. But I always have put cinnamon in my cocoa. Cut me and I bleed fairy dust, I swear. Anyway, as the song plays, we see an as-yet unknown guy who, this being Once Upon A Time, is far from hard on the eyes.

This poor schmuck gets caught in a rainstorm, then drops his iPod out a window that won't close. The only clue we have as to who he may be is a sign on the wall advertising a hatter. And since we've already met the Mad Hatter, we're left to wonder if he isn't an associate from Wonderland or something. (And I must say that's a carefully placed Red Herring, writers. Well done!)

The man stares thoughtfully out the window, and as the song winds down he's visited by a pigeon bearing a postcard from Storybrooke. It carries one word: 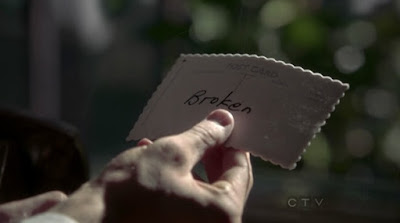 And then we leave Mr. Sexy Mystery and jet off to the Enchanted Forest, where Sleeping Beauty (a.k.a. Aurora) is being awakened by True Love's Kiss, and apparently without that pesky morning breath that would accompany a century of sleep. Prince Philip assures her that all is well, and he's brought another soldier along on his journey.

Forward to Storybrooke, the moment after the curse has broken. Snow and David aren't sure what the purple smoke means, but they know it's no good. There's a wonderful scene of them hugging Red and Granny and dwarves, all with their memories intact, and then... Emma.

Oh, my God, the feels. The look on their faces when they realize that this, at last, is their daughter, all grown up, and she's just saved them all. 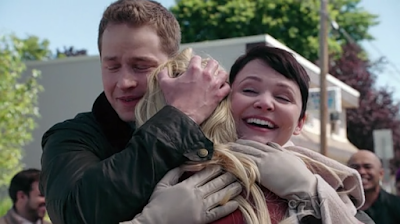 Henry breaks the ice by calling David "Grandpa". And we all go awwww.

Blue shows up to let them know that magic has returned to Storybrooke, but without a wand or fairy dust, there's not much she can do to counter it. Everyone wants to go after Regina, but Emma comes to her defense, letting them all know it was Gold who brought magic back, and his agenda is unknown at the moment.

Gold, meanwhile is finding out from Belle that she's been in forced solitude in the basement loony bin at the hospital and he swears revenge. Belle makes him promise he won't give into his hate and kill Regina. He reluctantly agrees, but we can see the wheels turning in his head, looking for a loophole.

Snow's trying to bond with Emma, who shrugs her off with an attitude that clearly says:

On the other side of town mob is forming thanks to Dr. Whale, and they're on the way to Regina's house. Henry pleads with Emma and his grandparents to help defend Regina, because regardless of what she's done, she's still his Mom.

Back in the Enchanted Forest, we see Philip's soldier friend on patrol, when he gets a creepy feeling. A second later, a dementor wraith bursts out of the ground, going after all of them. Philip manages to chop off an amulet around its neck, and he picks it up in his bare hand like an idiot.

The soldier takes off his helmet and we meet...Mulan! 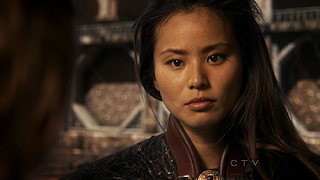 F**k yeah! She tells them the thing is a wraith and it'll eat your soul but only if you get marked by its amulet - as Philip has, and carefully hides from his beloved.

Forward to Storybrooke where we see Gold carefully - very carefully - pulling that same amulet out of a box with gloved hands and putting it in his pocket.

The mob shows up at Regina's house and she greets them cordially, obviously unafraid of them and their threats. She tries to throw a fireball only to find that nothing happens. Emma arrives with David and Snow, and they all suggest that Regina be locked up instead.

Leroy asks a key continuity question: if the curse is broken, why are they all still in Storybrooke? According to Regina, they didn't go back because there's nothing to go back to.

Gold shows up at the jail later, and lets Regina know he's found Belle and knows she's behind Belle's twenty-eight year incarceration. He considers that a fate worse than death, so he's going to repay in kind. He reaches through the bars and pulls her hand through, slamming the amulet down onto it. Then he uses his dagger to call the wraith.

Meanwhile, Snow begs Emma for some mother/daughter bonding conversation - since they've only ever talked as buddies and not relatives - and inadvertently confesses her one night stand with Whale as David listens.

Over in the Enchanted Forest, Philip tells Aurora he has to go get some wood (heh) but really, he's trying to get away because he knows his soul is about to get gobbled by a wraith. He heads off to meet his fate far from his beloved (thereby keeping her out of danger).

Mulan hears the wraith and puts two and two together when Aurora shows up looking for Philip.Mulan tells her to stay put, she'll only slow things down. Aurora is jealous as hell and tells her that's not true - and then promptly tiptoes back into the tent to get her cloak before leaving. It's obvious Aurora is a pampered princess and equally obvious Mulan has no time for her nonsense.

They both rush over to Philip and he tells the two women to keep each other safe. With a last "I love you," to Aurora, the wraith takes his soul.

Back in Storybrooke, Emma confronts Gold, who reminds her that she got all her happy endings and really shouldn't be threatening to punch him in the face. He lets her know he's brought magic back to town and when Snow asks why he responds with an enigmatic, "Not telling."

Then he reminds Emma that she owes him a favor, just as the wraith shows up. Belle overheard the whole thing, and she gets pissed off when she realizes that Gold called the wraith.
"I thought you'd changed!" She whines.
"What, in the hour you've known me?" He sasses back, and she runs off.

The wraith heads for the jail and they borrow CGI from Harry Potter as it tries to eat Regina's soul. Snow chases it off with fire, but Regina assures them it will regenerate and return. David points out that the wraith will solve their problems by taking Regina out of the picture, but Emma reminds them that she made a promise to Henry - Regina can't die.

Regina offers Jefferson's hat to open a portal (which they should be able to do now that magic is back in town) and they're going to send the wraith through. Snow reminds her that the Enchanted Forest no longer exists, but Regina tells her (while not meeting her eyes) it will send the wraith into a place that into oblivion.

David, Snow, and Emma fight the wraith off with fiery brooms as Regina tries to get the hat to work with her faulty magic. Emma places her hand on Regina's arm and suddenly...the hat begins to spin and a portal opens, sucking Emma into it. Snow screams out - she won't lose Emma again, and dives in after her. David tries to do the same, but it's too late. He hits the floor hard as the portal closes before him.

David goes ballistic, demanding to know whether his family is dead. Regina, whose magic has been jump-started, pins him to the wall with vines and plans to kill him until Henry shows up. She explains to him that Snow and Emma are gone and he calls her evil - demanding that she find a way to get them back. He leaves with David, who has now taken custody of him.

Belle comes back to Rumple, touched to see that he still has her chipped cup. He warns her away, and Belle decides to stay, sure that she can save him from himself. Oh, Belle. Staying with a turd of a man hoping he's going to change.

David takes Henry back to the apartment, and he tells Henry that his Mom and Grandma are still alive and he will find them. He will always find them. Because that's the iconic hero line.

In the Enchanted Forest, Mulan tells Aurora that things have changed since she was asleep. When the curse came down, it destroyed part of the land, but one corner of the kingdom remained untouched. For twenty-eight years, they were frozen until the curse broke.(So wait - she was frozen and under a sleeping curse? Talk about a tough break...) Mulan suggests that they go to a safe place she knows of because the rest of the land is ravaged and home to savage beasts and threats.

They hear a noise, and under some rubble, they find Emma and Snow, unconscious. Mulan tells Aurora that they are what brought the wraith and therefore are responsible for Philip's death.

I'm going to give this one four wraithy amulets out of five:

This episode had plenty of what a premier should have, mystery, feels, action, and a laugh or two. The only thing missing was some good Regina snark.
By Ellie DeLano - September 30, 2012