Pay For Christmas NOW With This One Little Trick 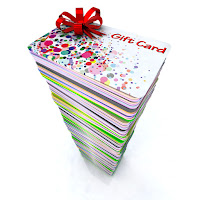 Every holiday season, I watch my friends frantically trying to figure out how they're going to pay for Christmas. They save up chunks of paychecks a few months before, they max out the credit cards, and if they're lucky enough to get a Christmas bonus at work, you can bet it won't be spent on themselves. And then in January, they wail about their enormous credit card bills or how they got a late fee from the electric company when they had to pay the bill a bit late because of, y'know...Christmas.

I used to be this person. The holidays brought on a sense of dread at the thought of stretching my already stretched-out budget just a bit further. I never seemed to have enough money for what I wanted to get everyone, or enough time to get it in, either. Isn't Christmas supposed to be a time of joy?

Then a few years back, I had a boss who was kind enough to give me a gift card for my birthday that year. It was for a store I don't go to much, so I stuck it in one of the many slots in my wallet and forgot about it. That year, as I was getting ready for the holiday season, I realized I didn't have enough money for everything I had hoped to get my daughter. I reached for what I thought was my credit card so that I could call the number on the back and check my balance when I suddenly found the gift card from my birthday. Wow! A mini-windfall! I headed off to the store I never shopped at and found just about everything I needed, plus a couple of extras. How terrific!

That following January, I was out shopping at Target for new snow boots since my son had outgrown his, and I impulsively added a $25 gift card into the purchase. I had the extra money, and I thought it might be good to put it aside in case I needed something sometime and didn't have the ready cash. A few weeks later, at my next payday, I did the same at Barnes and Noble. I didn't manage to buy a gift card at every payday, but I got close. Sometimes it was $25, and a couple of times it was $50, and all at a variety of stores.

I just kept putting them up in a box on my closet shelf, and when November rolled around, I pulled them out to count. I was amazed when I realized that I had nearly $600 to spend at stores I shopped at on a regular basis, plus one or two specialty stores. I didn't touch my credit cards once that season, and since I spread the dollars out all year long, my checkbook didn't feel much more than a nudge from the extra holiday goodies I stocked the kitchen with.

I've done this ever since, and let me tell you - it's been a real blessing as a working, single Mom. When the car unexpectedly needed repairs that drained my bank account, I had gift cards on hand that bought me groceries at my local Wal-Mart. As an added plus, I have an instant gift ready whenever my kid says "Oh yeah, Saturday is Emma's birthday party, and I'm invited!" I replace whatever I've had to take as soon as I have a bit extra to do so.

I know, I know...I could put that money in a 6 month CD or an interest-earning account and at least get the extra interest on it, but I know me and that won't work. First of all, the small amount of money I can contribute won't make much more than a few dollars in interest, and if it's cash, I've found it goes a lot faster. Gift cards, not so much. It's easier for me to leave them alone, my own personal holiday stash.

Plus, I find myself bargain shopping a lot more when there's a finite amount on that card. It's like a challenge. What can I get for $50 or $25 - including tax? Ringing out for just pennies over (or under) that gift card amount is a great feeling! And I'm getting better and better at it with every year!

This year, give yourself the gift of gift cards, for a holiday that hurts your checking account a lot less in December.