Once Upon A Time-Season 1, Episode 22 Recap: A Finale That Makes You Shout "Finally!" 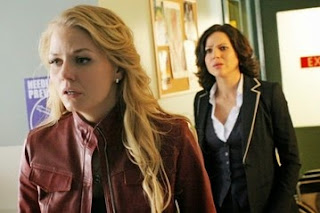 As you know, I'm retro-reviewing this particular season, as I didn't catch it when it originally aired. Since then I've seen a lot of character development, and a lot of secret yearnings and motivations revealed. And the truth of the matter is, tonight's episode is the tale of two mothers: one who wins, and one who loses - and how that defines them and unravels them.

So with that in mind, we begin tonight's tale in a prison cell with Charming, who is beating against the bars of the cage and vowing to find his true love. He's dragged out by the guards, and a struggle ensues. Just as we think he's getting away, he encounters a guard with a bow, who shoots over his shoulder and kills another guard. He removes his helmet to reveal...

Our Hunksman!! Oooooh! God, do I miss Graham. I miss him hard. Hard. Soooo hard.


He gives Charming some weapons and sends him on his way, reminding us that he gave up his heart so that the queen would spare Snow. "Don't let my sacrifice be in vain," he reminds him. And that, of course, reminds us again that he's gone. F**king gone.

Forward to Storybrooke where a frantic Emma is screaming at Dr. Whale and waving the apple turnover around, trying to find out what the hell is going on with Henry. She stares at the storybook, realizing that the reason they can't figure out what's wrong is because it's like magic...and suddenly she believes. 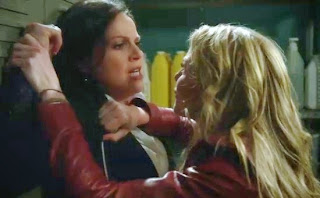 She hauls Regina into a closet  and confronts her, and a tearful Regina confirms it - it's all true. The curse, the fairy tales, all of it, and she can't wake Henry. She used the last of the magic to get the poisoned apple. Regina is obviously shaken by Henry's pending demise and at a complete loss, she suggests that they turn to Rumplestiltskin.

Flashback to the Enchanted Forest where Regina pins the Hunksman to the wall in a fit of fury, and using her magic mirror, she tosses Charming into the Infinite Forest - a place you don't want to be lost in. He runs in circles, frustrated, until he finds Rumplestiltskin. Rumple, strangely enough, has the wedding ring that belonged to Charming's mother. He's enchanted it, and it will find Snow White.

Charming refuses to make a deal and tries to fight him, only to have Rumple toy with him some more clearly having all kinds of fun (and so are we!). Finally he gets tired of it and tells Charming they both want the same thing. He offers Charming a deal. He's managed to bottle true love, and he wants Charming to help him protect it. True Love, it turns out, has the power to break any curse. Remember this kids, it's important.

Forward to Storybrooke, where David is apologizing yet again, telling Mary Margaret he doesn't know why he keeps making wrong decisions. He confesses his love, and then he tells her he's leaving. He's going to Boston...unless she gives him a reason to stay. She looks at him sadly and tells him she can't, and oh...the pain on both of their faces. It's just emotionally eviscerating, it really is.

Across town, Emma and Regina have sought out Mr. Gold - a.k.a. Rumplestiltskin, who informs them that True Love is also the only magic powerful enough to transcend realms. When Rumple created the curse, he placed a single drop of his Eau de True Love (made from a hair plucked from Snow and Charming's heads) on the parchment, thereby making Emma -specifically Emma - the savior, as she was conceived of True Love.

He did this "for a rainy day." and Emma replies with tonight's winning line: "Well, it's storming like a bitch."

Gold convinces them that only True Love can save Henry, so the bottle must be fetched. Emma agrees, and Rumple lets her know the bottle is hidden with Regina's "friend" in the caverns under town. Then he tells Emma she's going to need something, and opens a case to reveal her father's sword. 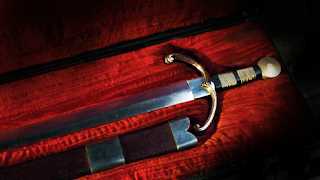 What a moment. When Emma looks down and sees Prince Charming's sword and realizes that he really, truly is her father. Whoa. The play of emotions on her face....

Emma bids a comatose Henry a tearful goodbye, then leaves Regina alone with him, and we see just how much Regina loves her son. Out of the shadows walks Jefferson, here to demand that she hold up her end of the bargain. Regina refuses and Jefferson gets all crazy-eyed, vowing revenge.

Emma, meanwhile goes to see August, and to her dismay she finds that he's almost entirely made of wood now. He's happy to see that she believes, but he reminds her that she must break the curse and save them all before the CGI overtakes him and turns him to weird anime wood. He freezes up, and Emma is unable to revive him.

Regina takes Emma to the library, opening a secret door on the wall that reveals a steampunk elevator. She tells Emma to get in and she'll lower her down. Regina lets her know that whatever's down there is pretty ominous and Emma reminds her that the only reason Regina isn't dead is because she needs her help to save Henry. If he dies, all bets are off.

We jump back to the Enchanted Forest again, and we see our old friend Maleficent, who turns into a large dragon as Charming clutches the egg holding the Eau de True Love like a football. Then we segue back to Storybrooke, where a stunned Emma steps off the elevator and sees her mother's casket...guarded by a dragon.

In a flurry of scene-vs-scene, we watch as Emma and Charming - each bearing the same sword - battle the beast. Emma tries her gun to no avail, and Charming tries all his best quarterback moves. They're both struggling and it's not looking good until David finds a way to jam the egg into the dragon's glowing belly before leaping out the window into the lake below and Emma hurls the sword right at the dragon's belly.

Over at the hospital, Snow is reading to Henry at his bedside from the storybook, and gets to the part of the Snow White story where she's awakened by True Love's kiss. "A pulse of pure love shuddered out and engulfed the land" she tells us. Remember this kids, it's important, too.

Mary Margaret tells Henry she gave him the book to remind him that while life doesn't always have a happy ending...

Aaaand she doesn't get to finish that thought, because Henry's heart rate starts falling and a team with a crash cart comes running in.

Meanwhile, down in the hospital basement Jefferson drugs Nurse Ratchet and moves past Chief Bromden to open a door in the loony hatch. We see a bedraggled and confused Belle. Jefferson tells her to find Mr. Gold and to let Gold know that Regina locked her up. Oooh. This is not going to go over well with Rumple. Not at all.

Back to the Enchanted Forest now where Charming wades out of the lake and Rumple turns over the ring, which will glow as he grows closer to Snow. As a bonus, Rumple swirls him in magic and dresses him in a princely fashion, telling him with great glee, "I'm a fan of true love, dearie, and more importantly - what it creates."

Charming races on a white horse to Snow White's side, and we see a repeat of the opening scene of the series. And may I say...good GOD is Ginnifer Goodwin beautiful She is so perfectly cast. I heard in an interview that it was freaking freezing when they filmed this and she laid there like a trooper and didn't even flinch.

Charming proposes by a picturesque lake, and puts the ring on Snow's finger, and they kiss and ooooh I just happily sigh. You know these two are just crazy about each other. I wonder if Josh Dallas got down on that knee and realized he needed to do that in real life, too. And now I'm getting all verklempt.

We now see David Nolan in Storybrooke packing up his truck and driving for the town line...which we all know will not end well.

Emma finally dispatches her dragon, retrieving the bottle of Eau de True Love from a pile of ash, and makes her way back to the elevator only to find Regina gone. Gold appears at the top of the elevator, telling her that she should toss up the egg because Regina's sabotaged the elevator and there's no time to waste. She does so, then climbs up after it and discovers a missing Rumple and a tied up Regina, just as both she and Regina's cell phones go off.

They rush to the hospital, but it's too late. Henry is gone.

Over in Gold's shop, he puts the egg somewhere safe when he hears the door open, and when he looks up again, he sees Belle. He even reaches out and touches her to be sure she's real. He hugs her tight, but she has no memory of him. It's poignant and raw and Robert Carlyle plays that moment with such incredible finesse.

But that's nothing compared to the sad, soft violin and quite piano as Emma walks into Henry's room, the tubes in his body and the removal of the ventilator mask from his face by the nurse with gentle hands. Oh, Jennifer Morrison...you make me hurt all over. And Regina...the grief is evident on her face and the two of them are destroying me. We see Emma carefully stroke the hair off his forehead before she whispers a tearful "I love you, Henry," and then she kisses him.

And a rippling wave of light rips through the town as Emma's True Love's kiss has broken the curse. 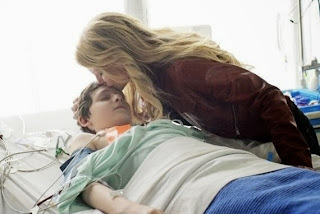 We watch as everyone regains their memories, and Blue tells Regina she'd better watch her ass. A tearful Regina begs Henry to remember that no matter what, she loves him.

And in the center of town, we see Mary Margaret - I mean Snow White - searching for her prince:

They run into each other's arms, right in the middle of mains street, and after Snow's "You found me!" They kiss like they've been cursed apart for twenty-eight years or something.

Oh, I defy you to watch that kiss and not grin like a total simpleton. And on that extreme high, the writers drop us off a cliff as we see Regina clutching Henry's pillow, torn apart with grief and loss. 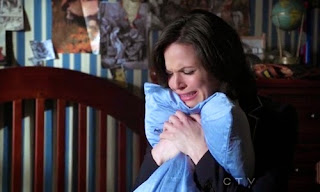 Rumple heads for the magical well, and Belle's memory comes back en route. He pours the vial of Eau de True Love into the well, and a giant purple cloud erupts, spreading across the sky. Rumplestiltskin has brought magic back to town.

We see Regina smile as she watches it, clearly happy to see it.

The clock clicks 8:15 and the episode ends.

Whew. What a ride. I give this one five princely swords out of five.

This one had it all - angst, heroism, crazy Rumpletstiltskin, a gorgeous hunksman, reasonably decent CGI, and most of all....love. Real, enduring love.