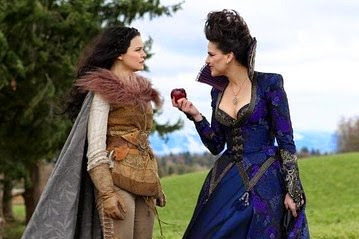 We begin tonight with an elaborate dream sequence, courtesy of Regina's tortured subconscious. The evil she set in motion has come back to roost, and she sees the townspeople, including Henry, assembled as a mob with torches and pitchforks, ready to do her harm.

"I just wanted to win," she sobs, "For once." And Emma strikes the death blow with an obscenely large sword after smushing a blackened apple into moldy ooze in her hand.

Regina wakes up panting in her bed (which can't be the first time - she did keep a huntsman as a love slave, after all), afraid like she's never been afraid before.


And on that fear, we hop over to Henry, terrified because he's in a car with Emma, speeding for the town line. He takes matters into his own hands, grabbing the wheel and forcing them off the road as he reminds her that her family is here in Storybrooke, and they need her.

Flashback to the Enchanted Forest, where evil, steely-eyed King George has Prince Charming set to die in the guillotine. This is thwarted by....Regina? She's here to make a deal, promising George untold riches if he'll turn the prince over to her. She also promises to make him suffer by using the Prince (and true love) to bring an end to Snow White.

Forward to Storybrooke again, where we see Regina's beloved apple tree - and it's clearly dying. She thinks it's a sign of the curse weakening. She confronts Mr. Gold, wanting to know why he seems so unconcerned by the ramifications.

Gold reminds her that killing Emma would have repercussions - it would automatically end the curse.
Regina realizes that Gold has a reason for having invented the curse in the first place, but she's desperate, even going so far as to offer him "anything."

He turns her down, and I have no idea why. I mean, I'm a straight girl, but even I re-check my Kinsey number every time Regina shows up on screen. DAYum.

Emma returns to the apartment and a very pissed off Mary Margaret, who wants to know why she ran away. Why, after they'd become like family, would she just up and go. She gives Emma some serious shit about abducting her son.

Back in the Enchanted Forest, Snow is rallying the dwarves, along with Granny and Red, to rescue the Prince from George's castle. Word has reached them that Regina is in residence, and Snow realizes it's most likely a trap.

Tonight's winning line goes to Grumpy, who turns to Red and says:

"Red, you've got someone on your chin."

Evil Queen Regina, meanwhile tells Charming (who is imprisoned in a dungeon) that she's got a really awful something planned for Snow White -  and she pulls out that iconic apple. 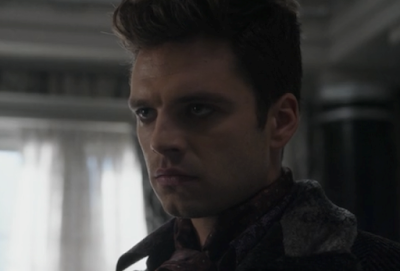 Mmmm. Welcome back, you sexy, sadistic headcase. She offers Jefferson a deal. If he helps her by opening a portal, she will reunite him with his daughter and set them up in style, with whole new identities.

She and Jefferson head down to the vault, and Jefferson's hat is unable to spin, due to the lack of magic. Regina pulls out the last of her magical objects and tosses them in, but it's still not enough. At last, she throws in the only thing of Daniel she has left - the ring that he gave her before he died. There's not enough magic to travel through, but Jefferson can reach through and grab something - something small. He tells Regina to think hard and guide his hand.


Flashing back to the Enchanted Forest again, we see the dwarves lined up and ready to rock, followed by the fairies, who are firebombing with fairy dust all over the place. Snow offs a half-dozen guards, and with Grumpy at her side she battles her way down to the dungeons, only to find that her beloved Prince Charming isn't really there after all. Regina has set up a magic mirror, Her Prince is someplace else, held by Regina, who appears in the mirror, offering her parlay.

Meanwhile in Storybrooke, Henry finds August, only to be gobsmacked when he sees August's wooden limbs. He finally has absolute proof that there really is a curse and he is over-the-moon happy about it. August lets him know that if Emma doesn't believe and soon, he's going to turn entirely to wood and he'll be a goner. He drops out of Operation Cobra, putting it all on Henry. No pressure, Henry. No pressure.

Emma seeks out Dr. Hopper, who reminds her that all this fighting isn't good for Henry. He reminds her that Regina is also his mother. Emma asks him if, in his opinion, Henry has been better off. Archie can't answer that. He just tells her the war has to end between her and Regina, for Henry's sake.

Back in the Enchanted Forest, the dwarves and Granny are calling Snow a damn fool for accepting Regina's offer of parlay. She meets Regina at the very stable where Daniel died, and Regina takes her to Daniel's grave. Regina lets Snow know that Daniel bit the dust because of her and her loose lips, and Snow's apology falls on deaf ears. Regina produces the apple and lets Snow know that the apple is cursed and she has a choice. She can bite the apple and fall into a regret-filled coma, or Charming gets the axe. Snow has no choice. She takes the bite.


Ooooh, what a line. Chills.

Snow falls into a cursed sleep. The apple bounces out of her hand and down a hill, and we see Jefferson's hand reach out of midair and take the apple, bringing it into our world.

Next we see Regina doing her best Martha Stewart impression, cutting up the apple and baking it into a turnover that is worthy of any episode of Iron Chef. Seriously. My mouth is watering just looking at the thing.


The doorbell rings, and it's Emma, She's here to offer her own parlay. She's going to leave town, and leave Regina with Henry's custody, in return for visitation rights. Regina balks - she doesn't want Emma in his life at all, but Emma reminds her that there's no such thing anymore. Regina smiles that cold, calculating smile and offers her a parting gift. She gives Emma the fresh, hot turnover, telling her they need to learn to be "cordial."

Flashback again to the Enchanted Forest, where the dwarves are gathered at Snow's side, along with Granny and Red. Regina is watching the tableau via her magic mirror with a thoroughly evil grin.

Fade right to Regina, still grinning as she approaches Mr. Gold in his shop. She tells him that she's managed to whip up a sleeping curse. She gleefully reminds him that now the curse will be stronger than ever, and whatever reason he had for wanting the curse broken will never happen.

Over at the apartment, Henry shows up to meet Emma, who tells him the news: she's leaving Storybrooke, and leaving him in Regina's custody. She's trying to do what's best for Henry, who reminds her that all heroes question themselves. This is just a low moment before she has to fight back.

Emma tells him he needs to stop believing in stories and curses. Henry gets good and pissed, telling her that she has to believe, she has to stop Regina. He spies the turnover on the table, smells the apples, and he's onto the plan. He tells Emma the turnover is poisoned, and then he tells her he's going to make her believe. He bites into it, and he hits the floor. 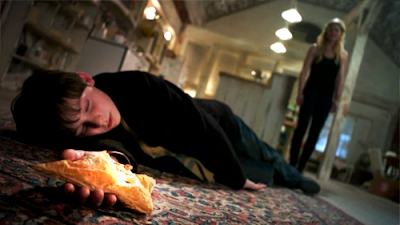 I'm giving this episode 5 poisoned apples out of five.

This one had a little bit of everything: Badass Snow, Dwarves and Granny, tortured Charming and Emma/Henry feels, with the added bonus of Jefferson the Mad Hatter Mancandy.