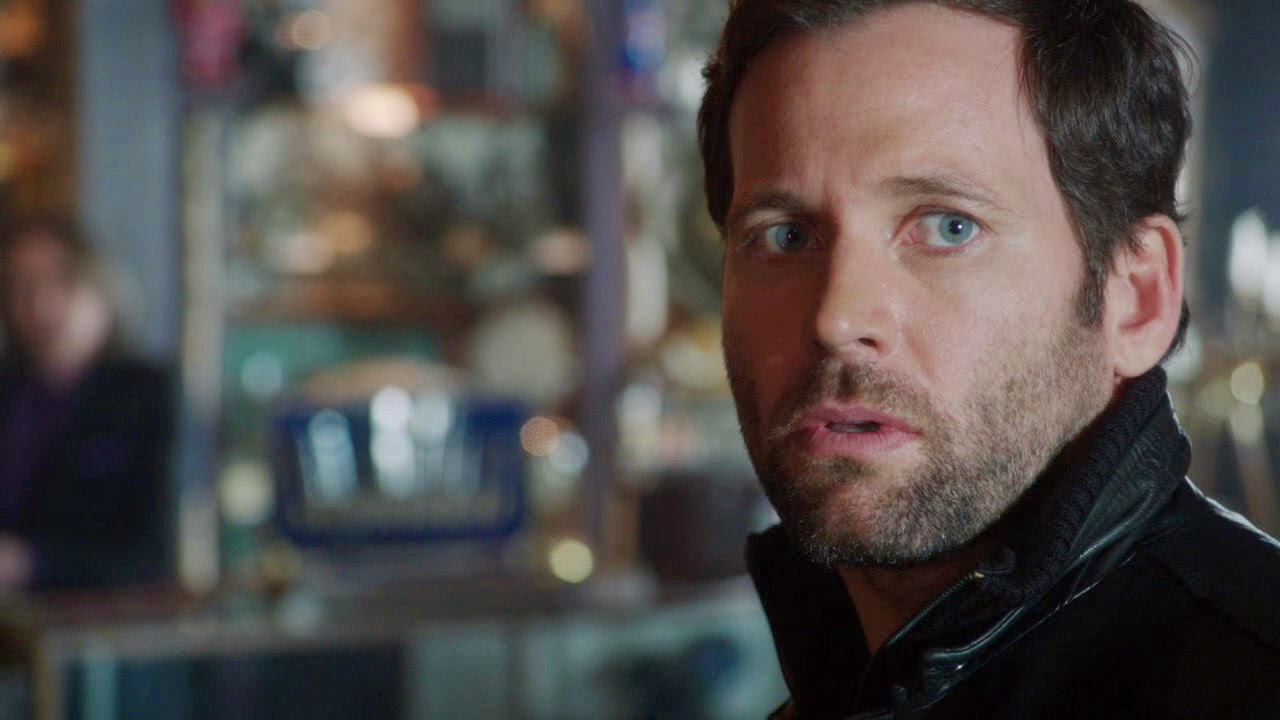 Tonight we begin at the apartment of Mary Margaret, where August is fixing door the with a medieval sort of deadbolt, guaranteeing no one can get in and plant a bloody murder weapon again, Mary Margaret has a pointed conversation with Emma about being ready to be Henry's Mom, and Emma assures her that she is. In fact, she's going to seek out Mr. Gold for legal counsel in her custody case against Regina.
Henry calls with an operation Cobra emergency, and August walks her out the door, needling her about her need to 'see the big picture'. He asks her to take the day off, take a leap of faith, and come with him somewhere. He tells her he can show her exactly what she's looking for.
"My kid needs me," Emma replies, "I don't have time for faith."
Over at Granny's Henry's all-aflutter because someone has changed the book. There's been a story added in, and it's about...Pinocchio?
Segue to the stormy seas of the Enchanted Forest where we see Marco (a.k.a. Geppetto) and a little, wooden CGI boy battling the elements on a rickety raft. The raft is going down and there's only one life preserver. Pinocchio tells his papa to save himself - he's wood, after all, he'll float. Sounds like a good strategy to me, Unfortunately, it doesn't work and Pinocchio drowns. How the heck do you drown something that doesn't breathe?
And in floats our favorite smug and sparkly fairy, Blue. She determines that Pinocchio has been unselfish, brave and truthful, and changes him into a real boy. Geppetto is over-the-moon happy and can I just say how much I love all of this actor's scenes? Such a warm and wonderful character.
Back to Storybrooke and August is dialing Gold (literally dialing, on a phone so old he might as well be talking through tin cans on a string), asking him for a confab to discuss Emma. "There's a problem" he says, just before he staggers around, grabbing his leg again. He lifts his pant leg to reveal the problem - he's turning into wood.
Ahhhhh. So August is Pinocchio. And since he's told several lies since he's come to town and that nose hasn't budged, it leaves me wondering where all that untruthfulness goes...
Over at the elementary school, Regina shows up to give Henry his lunch, and Mary Margaret and Regina have words. Regina again feigns innocence regarding the whole plot to frame Mary Margaret, but Mary Margaret calls her BS right to her face. Whoa. Our soft-spoken schoolteacher has grown some backbone and goes right for the jugular. Then she tells Regina that she forgives her. Regina's life must be filled with incredible loneliness if her only joy comes from taking other people's happiness. She tells Regina she must have a giant hole in her heart.
When Henry arrives, Regina tells him she's getting him transferred to a new class. Henry tells her to bugger off, he knows she's the evil queen. and Snow White will get her happy ending. No matter what she does, good will win!
Over at Gold's shop, Marco is there looking at a clock. Gold has obviously set this up so that August could see his Dad - and it's obviously a very uncomfortable situation for August, who feels like he's let his papa down.
August tells Gold that Emma is so consumed with this custody battle, she can't think of anything else. She's coming to Gold for legal advice, and he tells Gold that he needs to point Emma back in his direction, and trust that he'll get Emma to believe.
"Knowing who you are and your nature, trust is a big ask" Gold says coldly, but he agrees to give Emma a little nudge.
Back in the Enchanted Forest, Pinocchio has trapped Jiminy in a cuckoo clock and Geppetto reminds him that he's supposed to be good. Blue flies in with news of the curse, and briefs Geppetto on the plan to make the wardrobe from an enchanted tree. We find out that the wardrobe will have the power to carry two, not one, and Blue wants to use it to get the Prince and Snow White to safety before she gives birth.
Geppetto, like any parent, says "Hey, what about my kid?" He knows that when the curse strikes, Pinocchio will turn back into lifeless wood again. He won't have it. He wants Pinocchio in that second spot. Jiminy chimes in to remind him that this is for the good of the realm, and Gepetto plays the "Oh, but you turned my parents into shriveled, creepy puppets" card and Jiminy backs off.


Forward to Storybrooke now, where Gold is refusing to take Emma's case. He tells her it's a lost cause - nobody can beat Regina. Any custody battle would be vicious and protracted and only hurt Henry. He's not the man to help her beat Mayor Mills.
Emma storms out and beats on August's door. She's ready to see "The big picture." A short time later, August and Emma are leather-clad and riding a motorcycle. He tells her he's going to tell her a story - his.
Across town, Regina's car is dead - conveniently in front of David - who gallantly offers to give her a ride home. She invites him to stay for dinner and he balks at first, until she reads a faux note from Henry telling her he's eating dinner with Archie, so she's going to be all alone and oh, so lonely and unloved.
David can't stand to see anybody unhappy, so he agrees to stay for dinner. It goes remarkably well, friendly even, and Regina fills him in on the story of how she found him, cold and unconscious on the side of the road, nearly dead, and saved his life. David is grateful, and she...leans in! She's trying to kiss him! And he nopes the f---k right out of that! Go David!
He gets the hell out of there, and Regina, obviously thwarted, throws a wineglass into a mirror in frustration. Well, damn. You got nobody to blame but yourself, gurl. You were banging a prime piece of mancandy and killed him off in a fit of temper.

Back in the Enchanted Forest, Blue tells Geppetto that Snow White is giving birth now, and that means Pinocchio can't go through the wardrobe - Snow must accompany her baby in the second spot. She has to leave, but she begs Geppetto to tell Snow that she can go with the baby. Gepetto decides to give her the middle finger, and he tells Pinocchio that he's going anyway, and it will be his sacred charge to watch over the baby, and bring her back to them in twenty-eight years.
Pinocchio promises. Jiminy reminds him that there will be many temptations in this new world, but if he remains, brave, unselfish and truthful, he'll do fine. Geppetto puts Pinocchio in the wardrobe and closes the door. When he re-opens it, the child is gone. The wardrobe has worked.
We see Pinocchio come through the portal into our world, terrified by the sight and sound of Oceanic flight 815 from Sydney flying overhead (Sydney to LA by way of Maine?). A moment later, baby Emma comes through the portal, and he vows to keep her safe.
Rushing forward to Storybrooke, August pulls up in front of a diner - and Emma recognizes it. It's the diner where she was found as a child, when she was brought there by a seven year old boy - August! Emma is quite understandably freaked out.
August takes her to the woods, which Emma says is stupid because she was found on the side of the highway. He tells her she was found in the woods and he lied about where he found her. He describes her baby blanket perfectly - a detail that wasn't in the newspaper article. He tells her that Henry's book is true, and they both came into the world via tree. He admits he's Pinocchio. He begs her again to believe, and she refuses, turning and walking away instead.
He tries to follow her, but his leg wonks out again, and he tells her the truth - he's turning back into wood. He was in Phuket when she decided to stay in Storybrooke, and from that moment, he started turning back into wood again. He raises his pant leg to show her, but Emma can't see anything but the pasty-white leg of a person of Irish descent. I know that leg well.

He's furious with Emma for her disbelief. He tells her she's responsible for everyone's happiness, and she doesn't want any part of it.
"You're our only hope," he begs.
"Then you're all screwed," she replies coldly.

Forward (but not too far) to the foster home where Pinocchio (August) lives with baby Emma. Foster Dad comes in and he's a bit of a hard-ass, but in his defense, Pinocchio did steal his damn tools. After he leaves, another kid confesses that he's stolen a ton of money from the foster dad and he and some other kids are getting the hell out of dodge. Pinocchio asks if they can take Emma, and the older kid says no. So he kisses her goodbye and just takes the hell off, not even caring about her welfare or the promise he made to his daddy.
Forward more to Storybrooke. August seeks out Marco, and helps him fix a clock. Marco tells him that his papa must be proud of him. August tells Marco that he's let his papa down and Marco tells him it's okay, as long as he's making it right now. August asks if he can help him as an unpaid assistant, and together they get to work, father and son, and my heart is melting because, oh....I just love Marco so much.
Emma calls Henry on the walkie-talkie with a code red. He meets her in her car, and Emma asks him if he wants to get away from Regina. He does, more than anything, and Emma tells him she's going to take him and run - she's leaving Storybrook and taking him with her.

They end it there, but of course, we all know the truth: 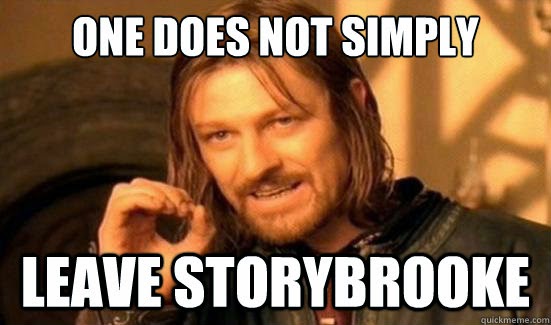 I'm giving this one three blue wishing stars out of five.

Other than the ending and that brief bit of backbone from Mary Margaret, there wasn't a lot going on in this one. Bonus points because I want Marco to be my papa, too.
By Ellie DeLano - April 29, 2012