Once Upon A Time - Season 1, Episode 19 Recap: A Promise Broken, A Promise Made


We begin this week with August, who is nursing his still-painful shin splints. He enlists the help of Henry, telling him they need to "accelerate the plan."

He sends Henry into Mr. Gold's shop as a distraction, while he searches the back room. Gold catches him, of course, and isn't very happy about it. His suspicions have been aroused, and his narrowed eyes make it clear that he's going to get to the bottom of the mystery that is August.

Over at the hospital, Emma questions Kathryn - who has no memory of anything beyond the accident. She'd been taken somewhere with food and water and clearly drugged, and eventually managed to find her way free. Dr. Whale says they're grilling the lab technicians at the hospital, trying to figure out who doctored the DNA results on the heart.

Across town, Regina is pissed at Mr. Gold, and he points out that the resulting inquiry into the frame job is going to point right back to her. She reminds him that he created the curse that brought them all here and wants to know his agenda.


Which, of course, gives us a good reason to flash back to the Enchanted Forest, shortly after Rumplestiltskin becomes The Dark One. Baelfire is playing in the road and accidentally gets hit by a cart. The merchant realizes instantly that this is The Dark One's beloved son, but it's too late. Despite Baelfire's protestations that it's only a scratch on his leg, Rumplestiltskin kills the man.

And in Storybrooke, David shows up at the hospital to see Kathryn, and they share a moment of closure. We see what a truly amazing and forgiving person she is as she reaffirms once again that his cheating on her is perfectly okay because he feels like he loves the other woman. Ah. Fairy tales.

Later, at Mary Margaret's get-out-of-jail celebration, Mr. Gold is in attendance, and Emma sees right through him, asking him point blank if he didn't engineer the whole thing. Gold turns it around and grills her about August, but Emma defends him. Gold thinks he's using a false name, and Emma reminds him that "Writers go by pseudonyms."

Moving back to the Enchanted Forest, Baelfire refuses to let Rumple heal his wounded leg. He hates magic, and he hates what it's done to his Papa. Rumple reminds him that his power has brought peace to the kingdom by ending the ogre wars. He reminds him that the dagger can end him, and give the power to another, he even offers Bae the dagger - just as their maid walks in the door.

Bae refuses to use the dagger against his father. Instead, he asks: if he can find a way to get rid of the dagger without ending his father's life, can they go away together? He wants his father back. Rumple makes the deal and even shakes on it. If Bae can find a way, he'll go.

And in Storybrooke, we see Gold searching August's room at Granny's. He finds a carved wooden figure, and a few spare pages from the story book - one of which - to his shock and dismay - clearly shows the dagger.

Across town, Gold is following August, who takes off on his motorcycle. August goes to visit the convent, and after he leaves, Gold stops to question Mother Superior (a.k.a. Blue), who tells him that August is troubled. He's looking for his father, a man he'd been parted from for many years - and it wasn't a good parting. Rumple is clearly disconcerted to hear this. Back in the Enchanted Forest, Rumple has killed the maid for overhearing the conversation about the dagger, and Bae is afraid to play with the other kids, for fear one of them will hurt him and end up dead. His young quasi-love interest, Morrain, sits next to him and tells him the solution to his problems with his father may be found with the Reul Gorm, a powerful blue light that can grant wishes.

Bae makes his way to the forest again that evening, summoning the Reul Gorm, a.k.a. The Blue Fairy, and Bae makes his case. Blue offers to send them both to a realm without magic. They would have to leave their entire life behind, and Baelfire agrees, despite the fact that Morrain is fourteen going on twenty-five in the looks department. He wants his father back, so Blue gifts him with a magic bean that can open a doorway to this non-magical realm.

Flashing forward to Storybrooke, we watch as David tries to apologize to Mary Margaret, and it ends up kinda like this:

She reminds him that he let her down by not believing her, and he reminds her that it was a helluva frame job, fer chrissakes, and he's only human. He asks her if they can't move forward. Mary Margaret astutely observes that it's like something just keeps pushing them apart.

David answers with a deeply felt:
"But I love you."
And Mary Margaret replies with a heart-twisting:
"And that is what makes it all so sad."

And with our hearts bleeding profusely, we go back to the Enchanted Forest, where Bae tells Rumple he's got a way for them to be together, just like they used to be. He mentions the Reul Gorm, and Rumple warns him that fairy magic doesn't mix well with what he is. And a place without magic, where he'd be weak again, powerless....he balks at the thought. When Bae reminds him they have a deal, he reluctantly agrees.

Bae takes him out into the woods and drops the magic bean, creating a portal. Rumple starts freaking out, and at the last minute, as Bae is being sucked into the portal, Rumple lets go of his hand, choosing his power over his own flesh and blood, weeping bitter tears as the portal closes and he realizes what he's done. He frantically digs at the dirt, shouting and screaming, vowing he will find his son. Oh, Bobby Carlyle. Right in the feels.

And in Storybrooke, Gold shows up at Archie's office. Archie kindly offers to hear whatever it is that he'd like to get off his chest. Gold confesses that he has a son, and he has suspicions that it might be August. He thinks it's possible that August might be here to try to kill him. He's obviously overcome with remorse, and Archie suggests honesty. He tells Gold to simply ask for forgiveness.

Gold tracks August to the cabin in the woods (the one previously used for fornication), and August actually calls him Papa. Gold apologizes, admitting that he was a coward, and that he should never have let him go. August embraces and forgives him, and they share a tender, tearful moment.

Gold asks if August was still looking for the knife. August admits that he was, because he wanted to see if his Papa had changed. Gold offers him the knife, telling him to destroy it. August grabs the knife and speaks the oath... 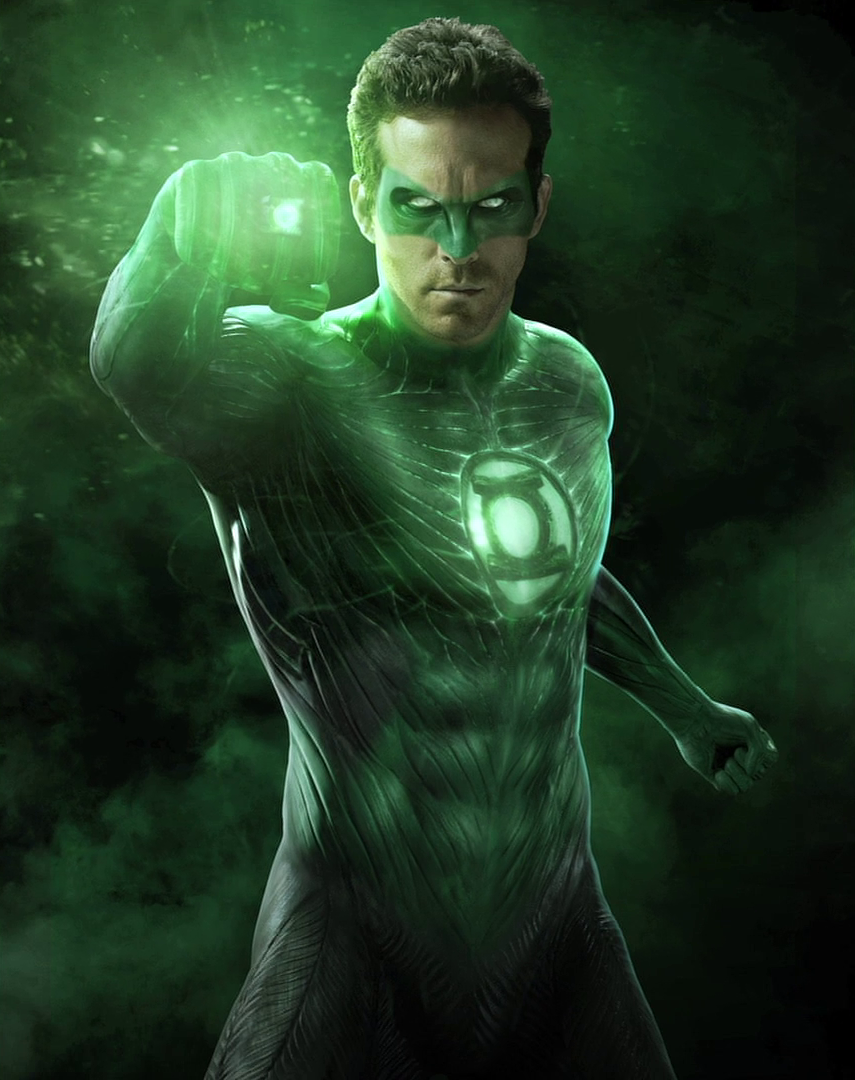 Okay, so it's a different oath and that's a totally gratuitous picture of Ryan Reynolds in tight green spandex. Anyway, August is trying to control Mr. Gold, but the dagger doesn't work, and Gold knows instantly that he's not Baelfire. Bae would never use the dagger against him, and Bae would also know that in this realm, the dagger is useless, since there is no magic to be had.

August admits he's not Baelfire, but he is from the other realm, and that he knows all about all of them. He wanted the dagger because he's dying, and he needs magic. He's trying to get Emma to believe, but she's taking too damn long. Gold tells him to try harder, and agrees to let him live, since he's dying anyway so killing him wouldn't be nearly as much fun.

Flashing back one last time to the Enchanted Forest, Blue shows up to stick her supercilious nose in the air and to scold Rumple for giving into the darkness. She tells him he can't follow his son - it can't be done - not without a great price. She slips a little and lets him know it'll take a curse, a really, really dark curse to get him to the non-magical realm. Nice going, Blue. Way to eff up an entire realm. You stupid c#!*t.

Rumple assures her that he has all the time in the world to find such a curse. And he will stop at nothing to find his son.

Forward again to Storybrooke, where Regina is waiting at the station to let Emma know there was a confession in the case of who framed Mary Margaret. Sidney has apparently confessed to abducting Kathryn, bribing a lab tech to alter the DNA, stealing and planting skeleton keys, and planting the bloody knife in the apartment. Emma tells Sidney she's not buying it, but he sticks to his guns, all while making doe eyes at a terribly smug Regina, who simply smiles her catlike smile and tells Emma to try and prove it.

Emma yanks her out into the hall for a private, yet scathing word or two, and she makes Regina a promise:

"You tried to take away someone I love," she tells Regina. "And now, I'm going to take back my son."

I'm going to give this episode 4 magic daggers out of 5.

I loved all the Rumple and Bae backstory - all those tidbits of his life with his son are some of my favorites in the show - but the whole subplot with August pretending to be Bae was weird and felt...off. Disjointed. Especially since August knows full well there's no magic to be had in this realm. They could have cut all that crap and given me ten minutes more of Regina and Emma with their claws and fangs bared. That's the real magic.
By Ellie DeLano - April 22, 2012