Once Upon A Time - Season 1, Episode 18: Meet Mommy Dearest (Oh Yeah, And Regina Had A True Love)

We begin this episode by looking a mere week into the past, to discover that it was Mr. Gold was behind Catherine's disappearance (and possible murder) all along. He set everything up, from the framing of Mary Margaret to the planting of the skeleton key. But why? What's his agenda, here?

And then we fly back to the Enchanted Forest, where we get our first glimpse of Mama Cora and young Regina. It's clear Cora is the ultimate stage mother with an agenda for Regina's life, and she'll use any amount of magic and condescending mompressure to get it.

Young Regina seems wild and free and idealistic. And that's because she's in love with Daniel, the stable boy. Aww. I kept waiting for him to drop an "As you wish" into their conversation, but I guess the writers were saving that for later (and I'm smiling as I'm typing that). 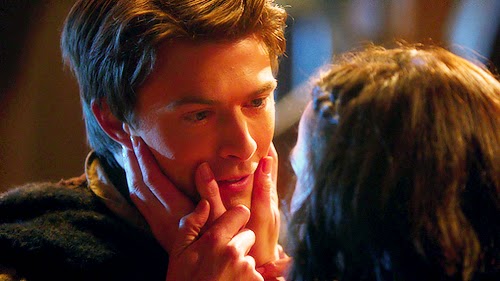 Back in Storybrooke, an obviously guilt-ridden David stops Emma, asking what he can do to help Mary Margaret. She basicallly tells him to go piss on an electric fence because the last thing Mary Margaret wants is a visit from the guy she threw her self-respect into the gutter for - the one that didn't have her back when the chips were down. He skulks off, back to his home on a quiet, residential street: Regina comes by the station to tell Mary Margaret to confess. She refuses, of course. Mary Margaret has no idea what she ever did to Regina to make her hate her so much and tells her so.

Which, of course, leads to a flash back in the Enchanted Forest where Regina is meeting Daniel. He wants her to come clean with her parents about them, and Regina balks, because she knows the power of her mother's magic. He reminds her that true love is the most powerful magic of all - just as a runaway horse goes sailing by with a terrified young girl clinging to it.

Regina, being an expert rider, catches up and saves the girl and holey moley!! How did they find a kid that looks like an exact DNA clone of Ginny Goodwin!! 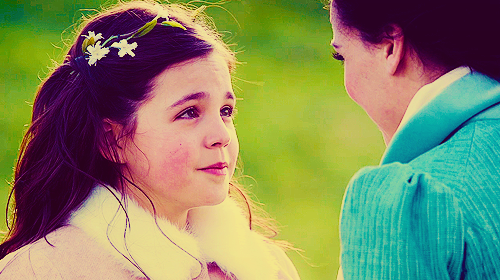 This is quite obviously young Snow White, and Regina has just saved her life.

In Storybrooke, The District Attorney wants a pre-trial interview with Mary Margaret. Gold encourages it, as a show of good faith. Sidney shows up with a vase of flowers and lets Emma know he's had no luck finding any kind of dirt on Regina. And in walks the DA....

George!! OMG, it's King George! Only here in Storybrooke, he's a ruthless DA instead of a ruthless King. He grills Mary Margaret with a tenacity that is simultaneously frightening and....sexy as hell. After being verbally badgered and goaded into a corner, Mary Margaret finally flips and admits she wanted Catherine gone, and Regina, who is looking on, smiles in delight.

Meanwhile, back in the Enchanted Forest, Cora dresses Regina to the nines and tells her the King is coming to visit. It turns out Snow White is the daughter of King Leopold, who - much to mommy's delight - is a widower and actively looking for a wife who can be a mother to his beloved daughter.

The King is so impressed with Regina's concern for his daughter that he asks her to marry him, and as a horrified Regina stands speechless, Cora answers with a deliciously creepy and emphatic "Yes." 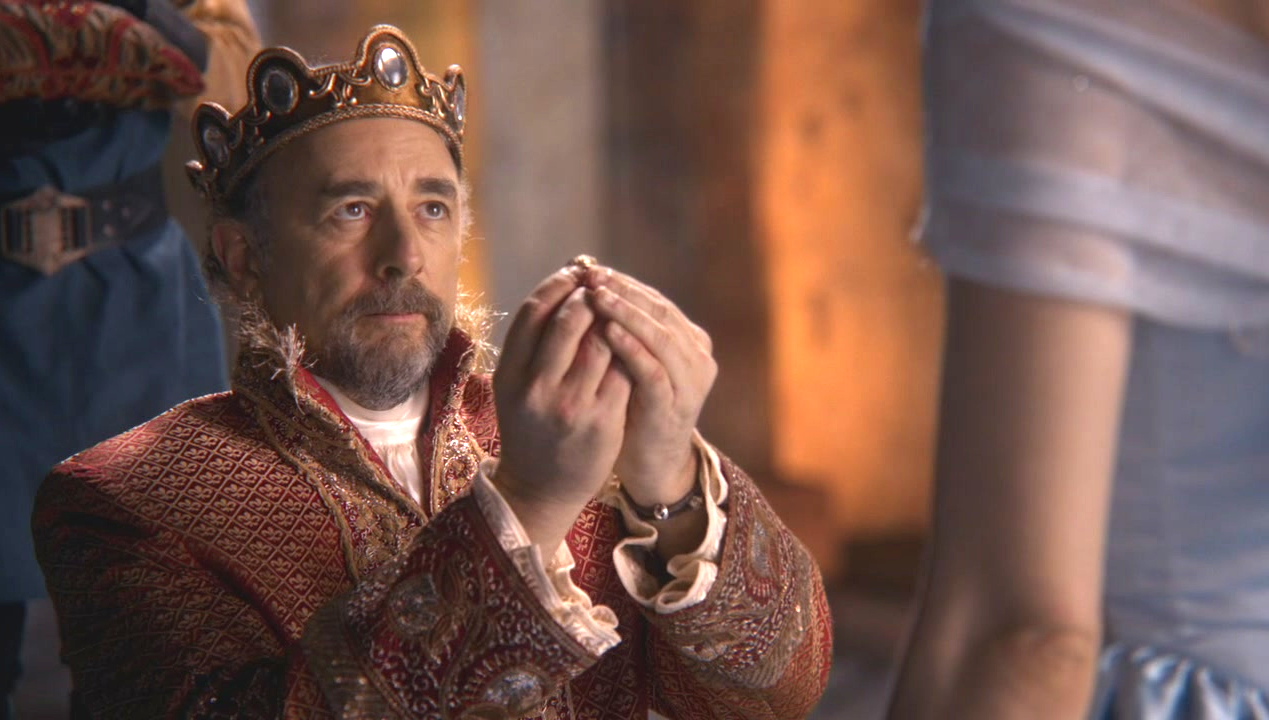 Regina runs to Daniel and begs him to marry her and run away with her. He reminds her that he's only a stable boy and can't give her riches. Regina tells him she doesn't care if she's ever a queen - she chooses him. She chooses love. Daniel pulls a ring of sorts off a nearby saddle and puts it on her finger, and they make plans to run away, just as young Snow shows up in the doorway, having seen them kissing.

Snow is understandably upset to see the woman her Daddy plans to marry kissing another guy. Regina lets her know that while King Leopold is a kind and a fair man, she doesn't love him. She loves Daniel, with all her heart. Snow understands, and tells Regina that she's going to go tell Daddy so that Regina and Daniel can be together. Regina freaks - Cora can't know this! So she begs Snow not to say a word until she and Daniel are safely away. Snow promises to keep her secret .

Moving forward to Storybrook, Emma is reading the story book when August comes along. Emma confesses her frustration with her own instincts not doing what they're supposed to do. August suggests that she treat it like writer's block. Maybe she should reread what she's done.

Emma decides to go back to the scene of the crime, with August in tow, and he suddenly seizes up, having obvious pain in his leg that he shrugs off to "shin splints." Then Emma pokes her hand into the hole of plot convenience that the heart box was found in and immediately comes away with a broken piece of metal that she just so happens to know is a piece of broken shovel.

She then breaks into Regina's enormous tool shed (like Regina ever puts her hands in the dirt. Maybe she has a hot gardener we'll find out about later. Why have just one sex slave?) and she finds a broken shovel that fits the shard she found just perfectly.

She puts the shovel back and comes back with a warrant to officially search the tool shed. She claims she got an anonymous call claiming that Regina was digging near the toll bridge on the day the heart was found. Regina looks skeptical, but she lets her in - and the broken shovel is nowhere to be found now.

Emma turns on Regina, who reassures her that Mary Margaret is going to pay for what she's done. "That woman has destroyed the last life she is ever going to destroy," she says. And we can see she means it.

Over at the Sheriff's station, Mary Margaret is sobbing in her cell when Regina comes to gloat. Justice moves fast in Storybrooke - Regina's there to tell Mary Margaret that the trial starts tomorrow, and she's going to have a front row seat. Mary Margare sobs that she didn't do it,and Regina (in a wonderfully played moment) strokes her face gently through the bars and says, "I know. But you deserve all of this."


Back in the Enchanted Forest, Cora is subtly (and with a warm, creepy smile on her face) nudging Snow to tell her secret. Cora confesses how sad it makes her that Regina's so obviously unhappy, and even brings up Snow's dead mother to ingratiate herself further. Snow can't bear to have her secret come between a mother and daughter, so she starts singing like a canary, telling Cora everything about Regina and Daniel.

Cora pats Snow sweetly on the head and then gets to Regina and Daniel just as they're leaving. Regina begs her to stop with the magic and listen - she wants to live her own life and she wants Daniel. "It's my life!' she shouts and Cora replies with "You foolish girl - it's mine." She reiterates that she's owed it after all she's done...the deals she's made...obviously a reference to a certain creepy, deal-making man.

Cora toys with Regina, making her think that she's letting her go, just before she rips Daniel's heart out and crushes it right in front of her sobbing daughter. Then she smiles that creepy smile and reminds her that mama knows best. "Love is weakness, Regina. True power endures." She finishes by telling Regina to clean her damn face up and get to Queening.


Snow confesses that she was the one who ratted Regina and Daniel out to Cora. Regina is flaming pissed, and a tearful Snow apologizes, but she just didn't want Regina to lose her mother, like she lost hers. It's sad and it's obvious that young Snow had no idea that betraying a secret would have drastic consequences. She was taken in by Cora, a master manipulator.

And from the cold, rehearsed words coming out of Regina's mouth, it's clear that Cora has her well in hand. She pastes on a smile and tells Snow that Daniel is gone, and they're going to be a family now - she, Leopold...and Snow. Snow is thrilled that Regina is now on board and skips off, obviously happy to have such a nice stepmother-to-be.

Cora enters to tell Regina how proud she is that Regina's learning how to play people. Regina remarks that it's highly likely Cora set the whole damn horse rescue up in the first place and she should have let the kid die. Fade forward to Storybrooke, where Regina is looking out the window, twirling her saddle ring and saying "We got her Daniel, we got her."

Over at the Sheriff's office, Emma watches as Mary Margaret is escorted from the jail cell for the trial. Gold reassures Emma that there's still time for him to work a little magic. Emma throws the vase of flowers against the wall in a fit of anger and finds the bug that Sidney planted there - he's obviously still working for Regina.

Emma finds August to apologize for doubting him. She shows August the bug and says it proves she's been trusting all the wrong people. "Sometimes it's hard to see what's right in front of us," August says prophetically, just before Ruby screams at the top of her lungs. Emma runs to the alley to see what Ruby's screaming about, and there lies Kathryn, clearly confused and clearly alive.


I'm giving this one four storybooks out of five:

I adore young, idealistic Regina, but Daniel has always been sort of "meh" for me. Young Snow is so spot-on with older Snow/Mary Margaret, it's amazing. The only bad point in the episode was the shovel bit, which really was stupid. Best of all, this episode marks the introduction of one of my all-time favorite characters: Cora! She's so deliciously smug and sugary ruthless. Evil is never so evil as when it wears a smile and tells you it's there to help you. Cora could give Dolores Umbridge a run for her money, and that is saying something.
By Ellie DeLano - April 01, 2012