Is Your Business Running Smoothly? Thank An Administrative Professional! 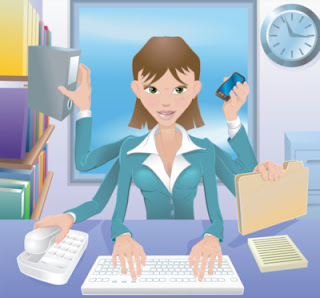 National Administrative Professional's Day is upon us, and since it's inception in 1952, it's been the hope of everyone like me who sits at the desk in front of the important door (or behind the reception desk, or next to the projector and the laptop in the big meeting room, or in the car running a bazillion errands for the department) that you'll remember who does the nitty gritty grudge work around the office.


Every year, this day is set aside to honor the work of secretaries, administrative assistants, receptionists and other administrative support professionals who are usually the unsung heroes of every company function. Who do you think negotiated the contract with the hotel for the big management meeting? And coordinated with the IT department to use as much of our own equipment as possible, avoiding thousands of dollars in extra AV equipment rental charges? And who catered meals (with two different off-site vendors) to three different buildings today, running madly between them all (in heels!) to see that they were set up and ready to go when the meetings broke for lunch?

Who put together the slide deck for the Town Hall meeting, reformatting and spell-checking nearly every slide? Who searched the internet for that article you remembered you read in 1989 that you wanted to share at the marketing meeting? Who booked your travel and made sure your visa was up to date? Who updated the thirty-eight page monthly spreadsheet and imported the graphs and charts into your presentation to the board set for later this week? Who un-jammed the copier? And the printer? And put together the training binders? And processed the payroll? And re-directed your calls when you had to get the monthly report finished?

And who has to wait until April (most of the time) to be acknowledged for a lot of that?

It's not that my coworkers and bosses don't appreciate me, I'm sure they'd tell you that they do. But they're all so busy, they don't usually notice me chugging along in the background, keeping everything they need at their fingertips, organized, ready to go and set up to make them look terrific.

A coworker and I once put together a list we called "You Might Be An Admin If....". It went something like this:
It's not the cushy job you see on Mad Men, typing the occasional letter and attending swanky office cocktail parties in a killer dress. Today's Administrative Professional is the right arm and backbone of the powers that be, and without her (or him!), the place would surely fall to ruin.

So let's hear it for the unsung heroes of everything that the people with the power salaries get all the credit for. Let's remember all that they do to make the big guys (and girls) look like they're the overachievers!
By Ellie DeLano - April 25, 2012