Once Upon A Time - Season 1, Episode 17 Recap: Hats Off To The Costume Designer! 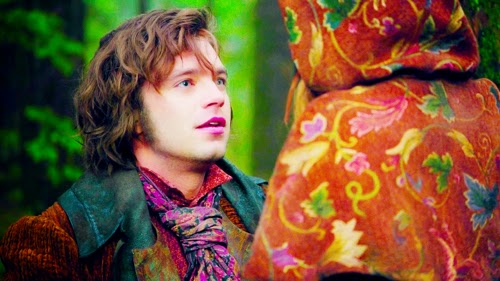 We begin by watching Mary Margaret - who runs like a girl - crashing through the forest, having just escaped from the Storybrooke jail.

Cut over to Henry looking at Alice in Wonderland in the story book. He's at the station waiting for Emma, who shows up with Mr. Gold, only to find that Mary Margaret has flown the coop.

Emma is determined to find her before her 8am arraignment tomorrow, otherwise Mary Margaret will be a fugitive, which makes things that much worse. Gold warns her that her job could be on the line for not immediately reporting Mary Margaret's absence, to which Emma replies: "I'd rather lose my job than my friend." 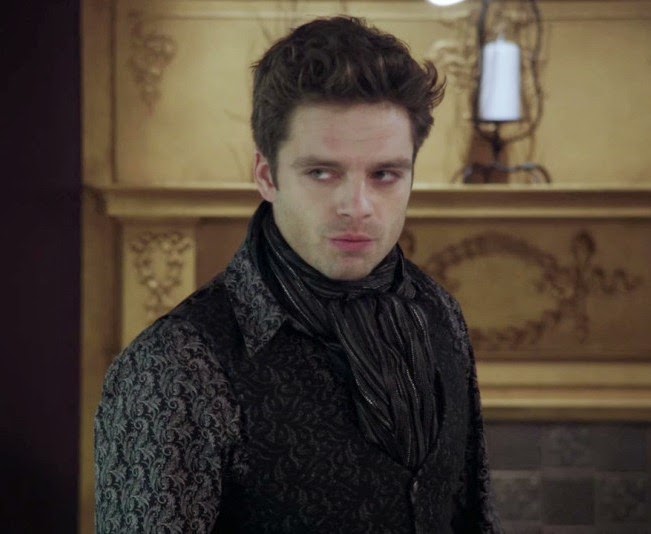 You know, Sebastian Stan and Jennifer Morrison were dating at the time this episode aired, and you'd never know it. Talk about acting. If I was hitting that on a regular basis, I don't know that I could keep my body language from showing it. A lot.

Anyway, the handsome, well-dressed stranger twisted his ankle avoiding Emma wandering the edge of the woods on this eerie, misty night, so Emma offers this complete stranger a ride.

Cut to the Enchanted Forest where we see the man, now known as Jefferson, with a longer haircut and an adorable cherub of a daughter by the name of Grace (and in case you didn't already know, that's a deliberate tip of the hat to The Jefferson Airplane, their lead singer Grace Slick, and their song "White Rabbit"). Jefferson and Grace are in the woods, hunting mushrooms, but when they arrive home, Regina's carriage is outside the house. Jefferson sends his daughter away to the neighbors, because he apparently knows Regina.

To say he's less than thrilled to see her would be an understatement. Which is crazy because she looks amazing in that dress.


She remarks about his obvious poverty and wonders why he doesn't go back to his previous line of work. Jefferson makes it clear he won't go back to whatever it is that he used to do. Not even if it means a more affluent life for his child.

"Because of my work, she lost her mother," he says. "I don't want her to lose her father too."

Regina offers him riches in return for his help getting somewhere. He takes one look at the map she gives him and refuses. Regina says she understands, and she goes, flouncing out magnificently in that dress.

Forward to Storybrooke, where Emma pulls up to Jefferson's mansion, then helps him up the stairs because of that poor, twisted ankle. He then makes some tea and forces it into her hand even though she's said she has to go. So she takes a drink from a total stranger and of course, he roofied her (Why do they call them roofies? They should call them "floories." Or "rapies.") and she passes out just after realizing she's totally effed.

Back in the Enchanted Forest, Jefferson and his daughter are at the market, and Grace falls in love with a stuffed bunny at the cart of an old crone (magnificently played in hideous makeup by Lana Parilla).

Jefferson can't afford the toy, but Grace, who is obviously a great kid, tells him it's okay. She doesn't need the rabbit.

So Jefferson makes her a rabbit of her own when they get home, but it looks like crap and he knows it does. He makes his decision, and tells Grace he's going to take the Queen up on her offer. It'll ensure their future. Grace is upset at the thought of him leaving, and makes him promise he'll come back.

He reaches into an old trunk and grabs a hatbox, and now we know Jefferson is The Mad Hatter of Wonderland fame.

In Storybrooke, meantime, Emma manages to get free of the duct tape that's binding her like a pro (Has she had some previous experience with this?) and sneaks quietly through the house. She finds the telescope Jefferson was using to see the Sheriff's station (through the thick woods several miles away from Main street) and she also finds Mary Margaret tied up in another room.

She frees Mary Margaret and together they try to make their getaway, only to run smack into Jefferson, who is now brandishing a gun and looking pretty damn maniacal. He makes Emma tie Mary Margaret back up because he's got a Fifty Shades of Storybrooke thang goin' on, and then he tells Emma he needs her do something for him.

Flashing back to the Enchanted Forest, Jefferson (who is dressed to the steampunk nines) opens his hatbox to reveal a top hat, a magical top hat no less. He gives it a spin and it morphs into a portal leading directly to Wonderland.


Wow, Wonderland is hella cool. Giant mushrooms, tons of color, and the CGI caterpillar rocks. Jefferson growls "I hate Wonderland," in such a beautifully defeatist way as they trudge on down the path.

In Storybrooke present-day, Jefferson has Emma in a room with many hats, and he tells Emma about the curse. She assumes he's talked to Henry, but it turns out he hasn't. It doesn't occur to her that someone else is sharing a remarkably detailed delusion, but then again a maniac has roofied and imprisoned her and her friend, so I guess that leaves you a little rattled.

He demands that Emma - who is obviously magic if she could bring Storybrooke back to life again - make a hat and "get it to work." And he's got crazy eyes and maybe even a little twitch, all done very subtly and with great finesse.

When she reminds him that Alice in Wonderland was "just a story," he replies with a rant: "What's a story? How is any book less real than another? History books come from history, but storybooks come from imagination, and that's magic. How arrogant are you to think yours is the only world?"


He gives Emma the biggest damn pair of scissors I've ever seen - literally, she could snip his fool head off with these shears - and tells her to get to work. Emma gives him a look kinda like this:

Meanwhile, back in Wonderland, Regina is determined to get in, steal something  and get out without letting the Queen of Hearts know she's there - this is someone she clearly wants to avoid. Jefferson balks and says he's leaving - he wants nothing to do with even the slightest chance of running into the Queen. Regina reminds him that in Wonderland, the portal is particular. The same number have to leave that originally came in. He's stuck there and cannot leave without her.

Regina finds a vault and steals a box, but they've alerted the guards. who give chase. Regina manages to thwart them before she steals a piece of magic mushroom, then feeds it to whatever is in the box. Purple smoke swirls, and reveals her father. Jefferson warns her that the soldiers are coming and reminds her again that only two of them can leave.

Regina freezes Jefferson in place and he begs not to do this - he has to get back to Grace. Regina flips him off, takes Daddy, and leaves - marooning him in Wonderland and leaving Grace fatherless.

Jefferson is brought to the Queen, who is magnificently appointed and veiled, and again, the costumes are so on point this episode: 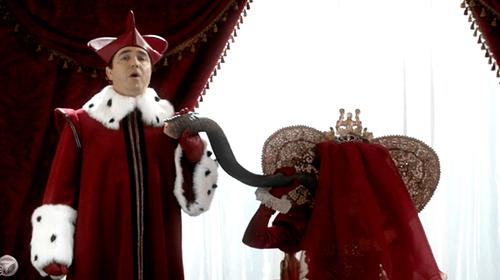 She demands his head. He still lives despite his head being separated from his body, and the queen puts him in a room, forcing him to try to recreate his magical hat.

Back in Storybrooke, Jefferson turns the telescope on Grace's new home. She's Paige here in Storybrooke, and with another family. It tortures him that she has no memory of her real father or their life in the Enchanted Forest. Emma plays the empathy card, letting him know that she knows what it's like to be separated from your kid. She tells Jefferson that if what he says is true - about the curse and all its trappings - then Mary Margaret is her mother, and maybe she should start believing. He's glad he's made her believe, and turns to walk away. Emma slams him over the head with the telescope, exclaiming "Crazy son of a bitch!"

He comes back at her as she's freeing Mary Margaret again, and we see fragile Mary Margaret channel her inner Snow White and kick the mofo out the second-story window, where he falls to the ground and disappears.Emma gives her a look and asks her where the hell that came from, clearly unsettled by Mary Margaret behaving like a badass.

Upon stepping outside now, the can see that it's morning, and Mary Margaret has a choice. Emma hands her the keys to the Bug. If Mary Margaret wants to run, Emma will let her go, but she asks Mary Margaret to stay and see this through. She tells her that she's now the closest thing to family she's ever had and she can't lose that. Mary Margaret returns,and is waiting in her cell at arraignment time, much to Regina's chagrin.

Oooooh. Now we find out that Mr. Gold is the one who planted the key, and Regina made some kind of deal with him and is angry that she doesn't have "results."

Emma is sitting with Henry when Paige goes by and says hello. Emma eyes her curiously before she asks to see the storybook, where pics of the Mad Hatter look strangely like Jefferson. 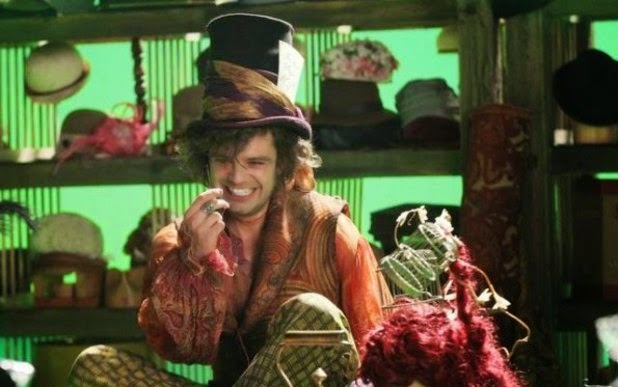 We end with a close-up on Jefferson's mad face as he tries and tries in vain to make a hat that will work, and then it shifts to a close up of Emma's face, as she digests the first real glimmers of belief.

I'm going to give this one five mad hats out of five.