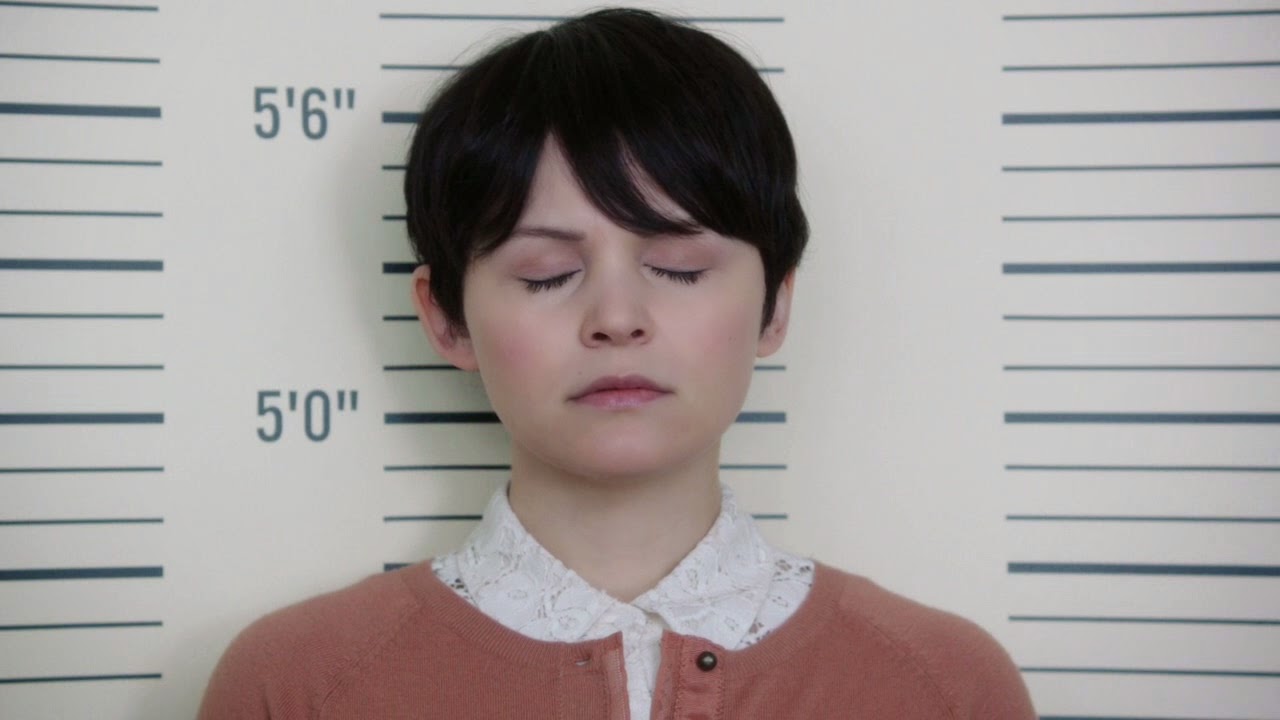 Tonight we start in the Enchanted Forest, where Prince Charming and Red Riding Hood are fending off King George's army. Red channels her inner wolf, taking on the army and buying Charming the time he needs to get away and get to Snow White.

Yet another badass female, saving a prince's ass. I love this show.

Moving forward to Storybrooke, Mary Margaret is at the Sheriff's office getting her mug shot taken and protesting her innocence in the killing of Kathryn Nolan. Emma believes her, but she tells MM that arresting her is necessary. She's got to hold to the letter of the law, otherwise Regina could fire her for not doing her job and put someone else in charge who will totally railroad her.

Back in the Enchanted Forest, we see Snow White singing to the birdies - and then her head spins 360 degrees and she's spitting pea soup and flipping out on them, chasing the vermin with a broom. Grumpy shows up to tell her its dinner time, and we see that her dwarf friends have staged an intervention. Jiminy Cricket has been brought in to let her know how angry, irritable and downright mean she's become since she took the forgetting potion.

One by one the dwarves read their grievances. One of them lashes out with "You are the worst, most nasty, horrible -" and Grumpy interrupts with tonight's winning line:

Snow reminds them that the potion was a solution, not the problem. Her problem is the Queen who took everything from her. She agrees that she should be taking it out on Regina instead of her friends, and she heads off to enact her vengeance and kill the queen.

Meanwhile, in Storybrooke, Mary Margaret is led into a small room for questioning, where Regina has asked to be third party observer to be sure the Sheriff remains impartial. MM admits to her affair with David, but claims she didn't kill Kathryn, despite the fact that the heart was found in her jewelry box.

Regina says she knows what it's like to lose someone you love. It changes you and puts you in a very dark place (helloooo foreshadowing). Regina reminds Emma that having your heart broken can make you do unspeakable things.

Back in the EF, Snow finds one of her guardsmen, and hurts his leg, threatening to torture him with a pickaxe for information. Whoa, Snow. Dark.

Snow strips him nekkid and takes his armor, just as Grumpy arrives to tell her she's lost her damn mind, now that it's clouded by her need for revenge. He says he didn't come to lecture her, he came to help her. He's there to take her back to Rumplestiltskin, so Rumple can give her the memories back that made her the person she used to be. He's the most powerful sorcerer in the land, after all.

Flashing forward to Storybrooke, and Emma is searching Mary Margaret's apartment when Henry shows up to help. He tells her that his Mom Regina- a.k.a. "The Evil Queen" has a motive - she hates Snow White. Emma gives him that indulgent smile and reminds him that fairy tales don't hold up in court - right before she finds the bloody hunting knife hidden in heating grate in the floor.

Over at Granny's, August encounters a dejected Henry and lends his support. He suggests Henry look in the book for his answers to Mary Margaret's dilemma. He also tells Henry that the book is special and that the stories in it are true. He's a believer, and that is why he's here.

"But I already believe," says Henry.
"I'm not here for you," August explains. "I'm here for Emma."

Ah-ha! At last, some clarity! So August is here specifically to help Emma somehow. Henry opens the book again, and we flash back to the Enchanted Forest and Prince Charming, who comes upon a naked guard in the woods.

"Keep your hands where I can see them," he calls out, followed by a wince as the man uncovers his jiggly parts and "On second thought, don't."

The guard tells Charming that Snow White threatened to skin him with a pickaxe. She's bloodthirsty and she's on her way to kill the queen. David refuses to believe it and runs off to find her.

Forward to Storybrooke again, where Regina is peeling an apple with an evil grin. Or maybe it's just a grin, but on her it looks evil. David shows up to plead the case for Mary Margaret. Regina is sympathetic, telling him its painful when someone we love betrays us. Everyone has a dark side. She tells him that evil isn't born. It's made. And sometimes, it can be staring you right in the face. HUR HUR HUR.

David looks her right in her evil and says that with all due respect, he doesn't think she knows much about evil. He also still thinks he might be responsible somehow, due to his blackouts.

Over at the Sheriff's office, Emma suggests that Mary Margaret hire a lawyer. In walks Mr. Gold, who reassures them that his expertise in contracts and his influence within the town make him an excellent choice for counsel. Mary Margaret agrees but Emma is more than a little dubious. Gold agrees to represent Mary Margaret pro bono, telling her blandly, "I'm invested in your future."

In the Enchanted Forest, however, Snow and Grumpy are talking to Rumplestiltskin, and Grumpy is begging him to change Snow's memories of true love back. Unfortunately, it's impossible via potion - only a true love's kiss can do that. Snow doesn't want her memories back. she wants a way to kill the queen.

Rumple gives her a magical bow and arrow that always find it's target, and he refuses payment, because he's "invested in her future." This is the first episode where you get a real sense of Rumple's behind-the-scenes machinations, and the puzzle being pieced together little by little.

Charming then goes to Rumple, wanting to know what he did to Snow. Rumple lets him know that Snow took a potion to forget him. In return for telling him where Snow is, he asks for Charming's cloak. Charming hands it over, and Rumple takes a stray hair off the collar after he poofs Charming into the woods.

He arrives just in time to stop Snow, giving her a big old smooshy kiss on the lips and ends up flat on his ass for it, because true love's kiss won't work if someone doesn't remember you. Unless you use that as a device in a fanfiction, and write it off because it only sort-of woke somebody. Theoretically. 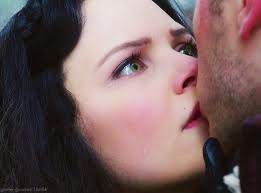 Snow ties him to a tree, and she realizes he must be the man she'd worked so hard to forget. Charming tries to remind her of their love, but it's falling on deaf ears. She's still determined to kill the queen, so she takes off to do exactly that as he shouts after her "Don't do it! Don't kill her!"

In Storybrooke, Henry shows Emma Regina's ring of skeleton keys, sure that this is how Regina got into the apartment. Emma is skeptical, but Henry proves her wrong when one of them does indeed open the door.

Across town, David goes to Dr. Hopper's office, asking for his help in remembering. The good doctor hypnotizes him, and David remembers a few things, talking to Kathryn via 1990 cellphone, and seeing Mary Margaret in the woods - but the memory is clearly of him with Snow, and he's telling her "You can't kill her."

Segue back to the Enchanted Forest, and Jiminy Cricket shows up to release Charming. He's been sent by the dwarves to aid him in stopping Snow. He prompts Charming to remind Snow of who she really is - that's the only way she'll remember who he is, as well.

Snow, meanwhile, is scoping the queen's caravan, and prepping to fire her magic bow as Regina passes by on horseback looking utterly ravishing in yet another amazing outfit.


Snow lets the arrow fly - right into David, he leapt into it's path (and somehow the entire caravan didn't hear him scream). He repeats his love for her, telling her he'd rather die that let her fill her heart with darkness.

"You'd die for me?" she asks, awestruck.
"Does it look like I'm making this up?" he replies saracastically. I like sarcastic Charming!
"No one's ever been willing to die for me," she says.

Her face grows curious, like she's experiencing deja vu, and she leans in for that kiss, and blammo! She's back! Just in time for Charming to be captured by King George's men. They leave Snow behind, and she swears she will find him.

Flash forward to Storybrooke, where David is visiting Mary Margaret in jail. He tells her what he remembered, and Mary Margaret is devastated that he would honestly think she killed Kathryn. She reminds him that she never doubted him for a moment, not even when everyone else thought he'd done it. And now the tables have turned. Knowing that he thinks her capable of that kind of evil is the ultimate betrayal.

Her soft, but firm "Get. Out." is heartbreaking.

Going back to the Enchanted Forest, Snow is home among the elves, bearing a new drinking stein for Happy, and an apology for all the rest of them. They welcome her with open arms, realizing she's back to being herself again. They offer her a place in her old room, but she can't stay. She's off to rescue Charming from King George, and the dwarves tell her they're coming along.

In Storybrooke, meanwhile, Mary Margaret is making her bed, and finds a key under the mattress, clearly planted there for her -but by whom? She tries it in the door, it swings it open, and then she shuts it quickly as Emma appears, delivering breakfast.

The test results are back on the heart. The DNA was a match for Kathryn. Emma informs her that she has move forward with the case, due to the overwhelming amount of evidence. She believes that Mary Margaret is being framed and that Regina is behind it. She reminds Mary Margaret that every time she's gone up against Regina, Regina has seen it coming. Not this time, though - she's going to keep her side investigation under wraps and urges Mary Margaret to just sit tight while she figures it out. Mary Margaret secretly stares at the key in her hand.

Can I tell you how god-diddly-damn tired I am of writing Mary Margaret? They better break this curse soon because Snow is so much easier to write.

Emma goes to Gold, telling him that she knows Regina has set Mary Margaret up. She asks him to help her because he's the only one who can beat Regina and she doesn't care about what method he uses to do it. She wants to save her friend, and he tells her that while Regina is powerful, Emma is more powerful than she knows.

And finally, we see Enchanted Forest Rumplestiltskin taking the hair from Prince Charming's cloak, and combining it with the hair he'd previously taken from Snow White, putting them in a vial where they light up and glow. 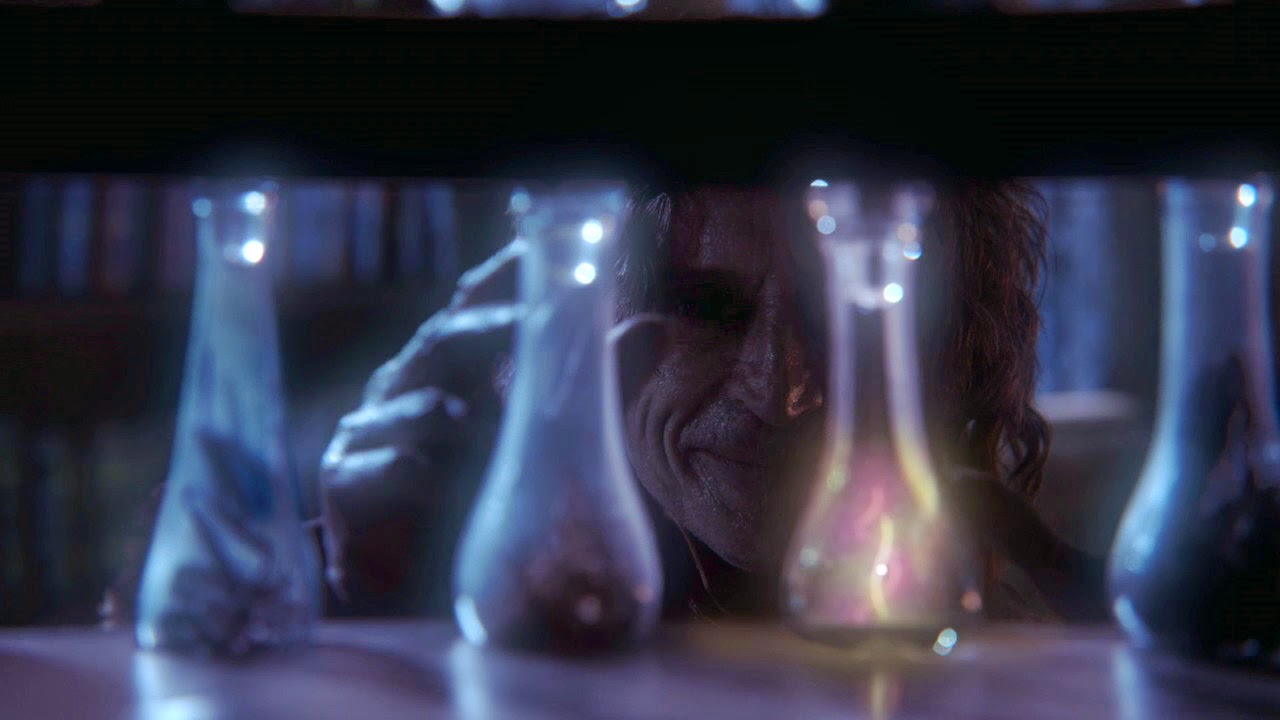 We end the episode with the shot of the Storybrooke jail cell, empty, with the door standing wide open.

I'm giving this one five wishing stars out of five.

There was angst - so much angst, great humor and sarcasm, gorgeous Regina-wear, oily Rumplestiltskin, and finally, finally some clear direction from August.
By Ellie DeLano - March 18, 2012