Once Upon A Time - Season 1, Episode 15: Who's Afraid Of The Sexy, Hot, Under-Dressed Wolf? 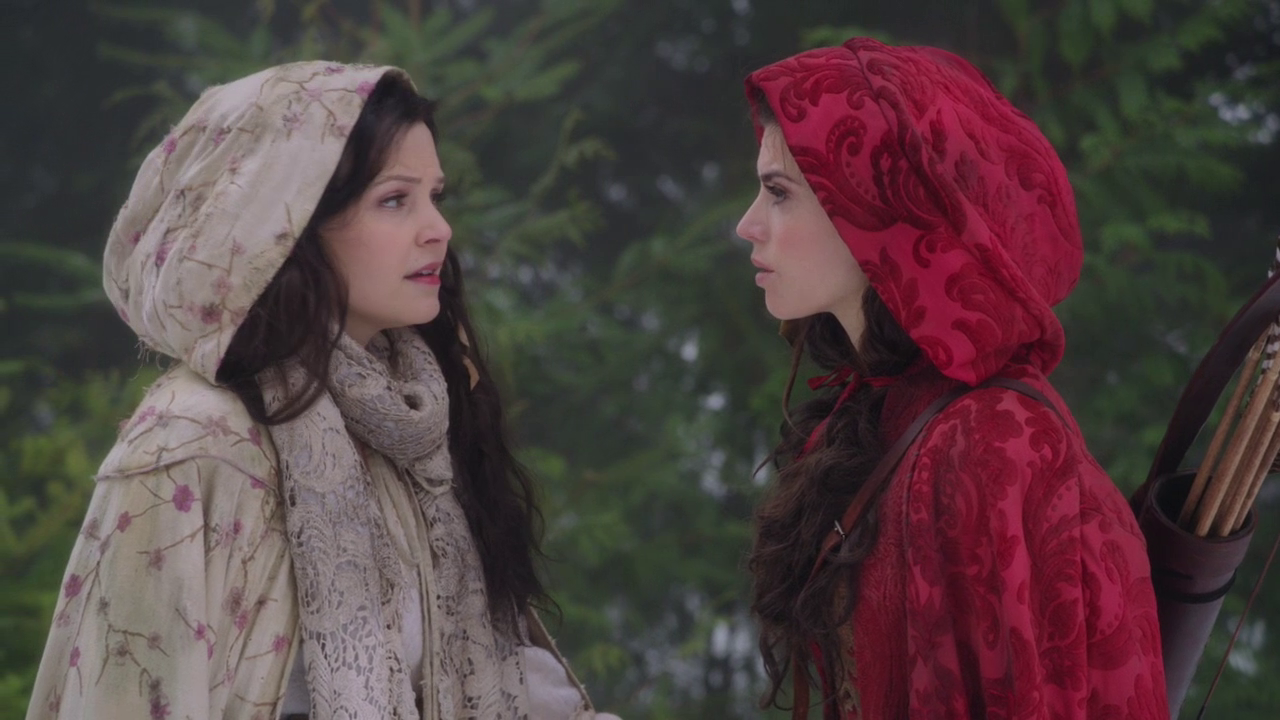 Tonight, we get the backstory of Ruby - a.k.a. "Little Red Riding Hood."
Ruby wants to get out of Storybrooke more than anything, and she's hanging over a booth at Granny's exposing gratuitous amounts of cleavage and mile-long legs as August telling her about all the places he's been, including those with lemurs. Granny shuts that shit right down, controlling Red with an iron fist and telling her to stop flirting and get back to work.

We meet now meet Red Riding Hood back in the Enchanted Forest, and her own personal piece of mancandy, Peter.


The two are crazy in love and so good looking I just want to watch them...do stuff. Lots of hot, nasty stuff.

Unfortunately, they can't do anything because Granny is all up in their faces. To make matters worse, an angry mob is at the door, forming a hunting party to go after the wolf that's been terrorizing the town. None of them are wearing red, which Granny assures her grandaughter will keep the wolf away.

The wolf is supposedly "Big as a pony but a lot more bloodthirsty." Red and Granny fortify the house  in what appears to be a well-practiced routine. Granny grabs her crossbow, ready for the wolf, if it should dare to show up.

Back in Storybrooke, Granny's griping at Ruby, letting her know she expects her to start learning how to take over the place, not flirt with the customers. Ruby bristles, and they trade some primo barbs: 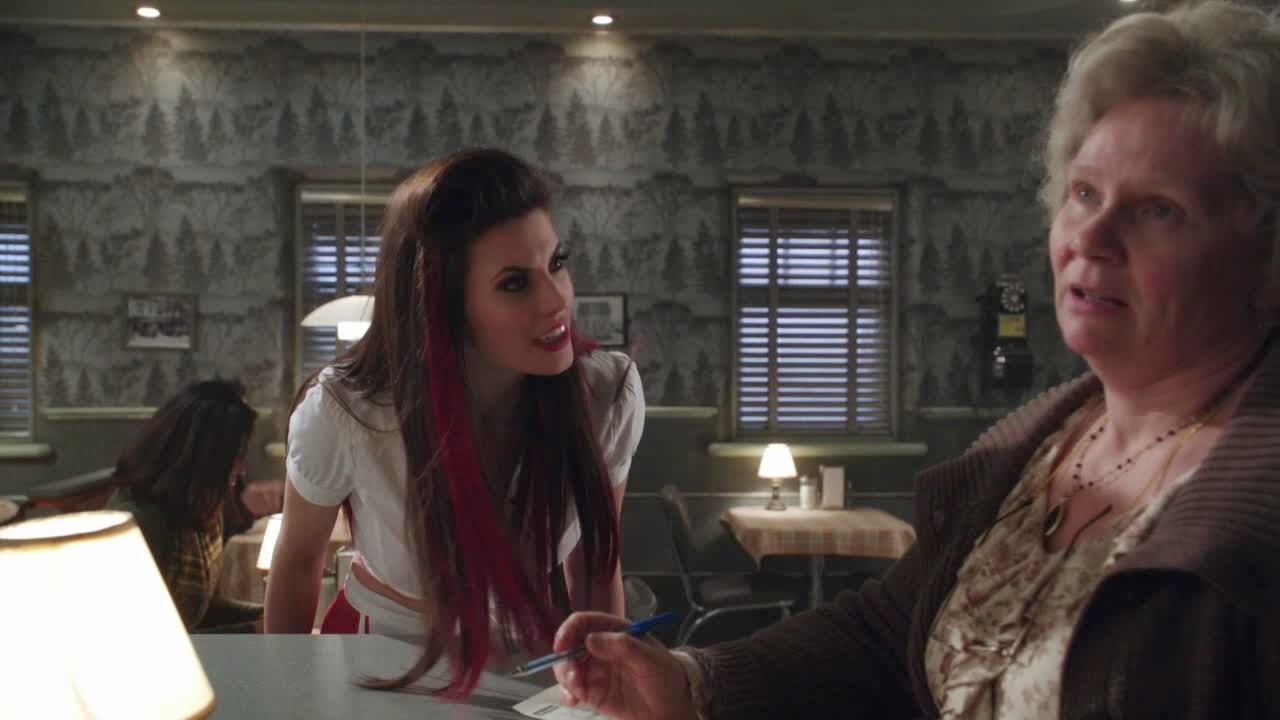 Of course, we won't wonder how a magical town that poofed into existence out of nowhere has access to movies from the fifties or their remakes which occurred while they were stuck in a curse. No sir.

In the morning, Red goes out to the henhouse to get eggs and finds Snow white instead, who makes up the name "Frosty"...uh...."Margaret"....uh....."Mary" and Red is kind enough to give her refuge and something to eat. The two become fast friends.

Later, they head to the well to find water and instead find a bucket of blood and the remains of the previous night's hunting party.


In Storybrooke, Mary Margaret is asking Emma about David and Kathryn. Emma tells her there's nothing new. Kathryn disappeared after she gave Mary Margaret a "well-deserved" slap. That particular phrase hurts Mary Margaret's feelings (even though it is the truth, so far as they all know it).

They run into Dr. Whale who's trying to get Ruby to climb in his car with him. Ruby's standing at the town bus stop that never sees a bus (except in Henry's case, where it must have but of course, we didn't get to see that). She brushes the lecherous doctor off and tells the girls she just wants to get out of town. Emma and Mary Margaret offer her to let her stay at their place.

Meanwhile, in the Enchanted Forest, a new posse is forming to go after the wolf, and Granny breaks into the meeting to say "hide your kids, hide your wife." The wolf killed her father and a bunch of veterans of the ogres war. The creature spared her, but left her with a huge scar on her arm. There is no defeating this wolf. "You don't kill it," she says ominously. "You just hide."

Zipping ahead to Storybrooke, and Mary Margaret is walking alone in the woods (even though a woman has recently gone missing there - real smart) and runs into David, who is in a daze.


Snow tells him that she, like Emma, believes he's innocent. David spouts some glazed-eyed gibberish and wanders off.

Dude, stay away from the mushrooms.

Back at Granny's farmhouse, Snow offers to help Red in her quest to run away with her true love, Peter. Snow confesses that she doesn't have a boyfriend (must be pre-Prince Charming). Snow thinks Granny's using the fear of the wolf to keep Red from true love. This makes Red determined to kill the wolf. She wants to track it to its den in the daylight and kill it.

They set out together and Snow is helping Red track, but not very well - I guess Red taught her how to track after that. They find the wolf tracks, and they lead....to Red's window? And strangely, it appears that the wolf transforms into a human. Red is devastated - the only one who's gone to her window is Peter.

So Red pulls Peter out into the woods and tells him that he has to be the wolf. Peter believes her, and warns her to get away. Red tells him she loves him and they can manage this. Like a chronic disease, or something. 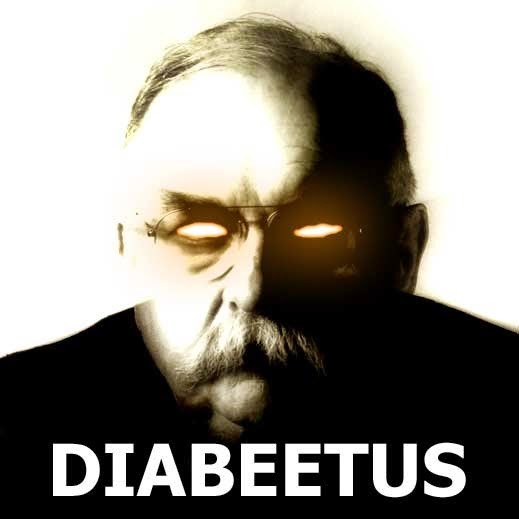 Anyway, they're going to chain him up during the wolf's time. Red refuses to leave, promising to stay by his side "for all the nights to come." Sad forehadow is sad.

In Storybrooke, Henry is helping Ruby find a job online via Geocities or maybe it's MySpace, and she begins answering the phone calls that seem to be flooding into the station all of the sudden, when that phone has never rung before. Emma offers her a job answering phones and fetching her lunch.

Ruby goes over to Granny's to rub it all in her face that she's the new deputy. Granny cuts her cold and they have a horrible, stilted conversation that sounds like every conversation I ever had with my staunchly Southern Baptist mother after I moved into the co-ed dorm at college. Granny is completely unimpressed with Ruby's attempts at independence. 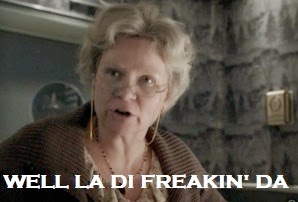 Then Mary Margaret shows up at the Sheriff's station, freaked out over David the space cadet. Henry hides the storybook in the desk, and he quietly tells Emma that Ruby is Little Red Riding Hood - all fivc foot ten of her. Emma asks Ruby for her help tracking David.

Strangely, Ruby can hear him when Emma can't hear a thing. Ruby runs into the woods and finds David passed out cold and totally oblivious as to how he got there.

Dr. Whale has no explanations either, beyond it being probably the same thing that put him in the coma. Emma asks how functional David could have been during the "episode." She refuses to believe David could have done anything bad, and strangely, Regina bursts in wanting to know why David doesn't have a lawyer. It turns out she's still David's emergency contact, now that Kathryn is gone.

Emma asks Ruby to take her Bug and go to the Toll bridge to look for any kind of clue. She has a hunch that David might have gone there while he was wandering around, since he went there last time he went cuckoo bananas. Ruby follows her instincts and finds....YECH. A human heart.

Ruby freaks out, screaming into her circa 1990 cellphone when she finds it, too. She's understandably shaken by the experience, and is rethinking the whole deputy thing. She goes back to the diner, and asks Granny for her job back. They talk it over, and Ruby confesses she was rebelling because she wasn't sure she could handle everything Granny wanted her to do. Granny tells her that she believes in her, and they make up. Ruby has found her inner wolf self, and she wants to have a job that makes people happy. Granny says she's planning on giving Ruby the diner someday. She ends with a gruff "Proud of you."

Meanwhile, back in the Enchanted Forest, Granny goes in to wake up Red and finds Snow wearing the Red hood. She tears Snow a new asshole and Snow inform her that Peter is the wolf. Granny is freaked when she hears Peter is chained up and for good reason - Red is actually the wolf. Her mother was one, too. In fact the whole family is made of werewolves, including Granny, though age now keeps her from turning. The red hood is enchanted - it keeps Red from turning when she wears it. 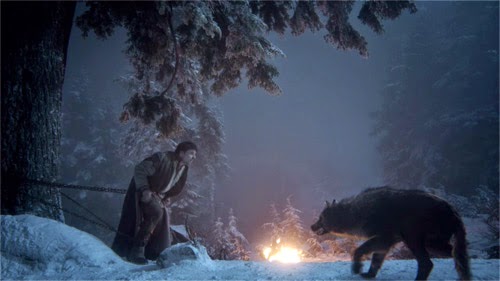 They race to find Peter, but it's too late. Red done et him.Granny fires the crossbow, taking Red down and they throw the hood over her, changing her back to human. Snow breaks the news and Red is devastated at the sight of the soggy chunks of meat that are all that's left of her boyfriend.

And finally, we zoom forward to Storybrooke, where Mary Margaret is consoling David down at the shelter, reaffirming her unwavering  belief in his innocence. Emma walks in and tells them about the heart in the box. She's sending it out for DNA tests, and should have the results soon. There were fingerprints inside the lid of the box, and she cross-referenced them against the Storybrooke database (which is probably held on microfiche or chiseled in a stone tablet or something. There was a match. David demands to be arrested, but Emma drops the bomb - the fingerprints belong to Mary Margaret.


I give this episode a wholehearted five wishing stars out of five.

It had mancandy (Damn, why did they have to kill off Peter?), cool backstory with an unexpected twist, and a bombshell of an ending. Nicely done!
By Ellie DeLano - March 11, 2012