Once Upon A Time - Season 1, Episode 14 Recap: Blue, The Condescending, Dream-Crushing Bitch 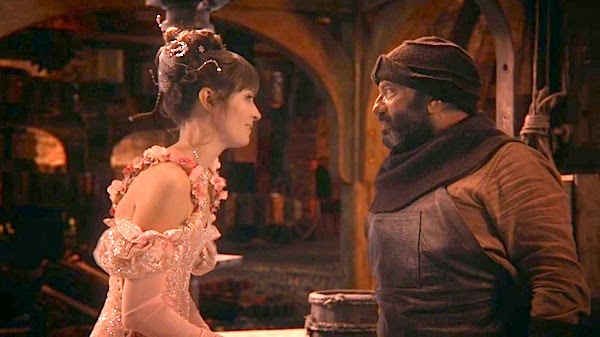 We open tonight's show with our obviously novice fairy, Nova, who's trying her best to fly straight and impress a very smug, condescending Blue Fairy, who I want to smack in her supercilious face. Is it just me? I hate Blue. I mean, I hate her. Hard. I can barely see to type this for all the hate blazing out of my eyes.

I think it's highly likely that at some point, we'll see an arc that shows us that she's really the mythical "Black Fairy" that Rumple stole the dark and evil wand from (you'll see more about this later, sorry I'm foreshadowing). I think she's secretly evil, and she's way more evil than Rumple. She's got a whole Dolores Umbridge vibe going on. Know what I mean?


Blue laughs off poor Nova's dream of becoming a fairy godmother, and sends her off to the mines to collect fairy dust. On her way out, Nova spills fairy dust on a giant egg (one of a group of giant eggs) and out pops...Grumpy? It turns out that dwarves spring fully-formed from eggs, and Grumpy looks nothing like his sourpuss self.

Instead, he's smiling and a little loopy. He gets measured for his work clothes and meets his brothers before he gets his pickaxe, which magically assigns his dwarf name: "Dreamy."

Before they head off to mine the diamonds that they crush into fairy dust, Dreamy wonders where the beautiful woman is that he saw while dreaming in his egg. The head Dwarf,  "Bossy" lets him know he must have been tripping bad. Dwarves don't fall in love, get married or have babies. They work, and that's all they do.


Flash forward to Storybrooke, where we see grumpy Leroy sitting at Granny's when Mary Margaret makes a very awkward and self-conscious plea to the diners for help in selling candles for the nuns at the upcoming Miner's Day celebration. They all give her the cold shoulder, so she tries her plea on Leroy as he's trying to leave.

He points out that they'd make a fine pair, the town harlot and the town drunk selling candles, adding with a sneer: "If you're comin' to me, you're screwed.

Oh, he's so delightfully prickly. I adore Lee Arenberg. Just adore him. So perfectly cast, and he brings so much to the show when he's on. I just want to hug him. And buy him a beer.

Meanwhile, at the park, the nuns are setting up the lights and vendor booths for the Miner's Day celebration, and we meet Nova's Storybrooke counterpart, who happens to be a nun by the name of Astrid. Leroy helpfully rewires her outdoor lights and they instantly hit it off as he explains that he owns a clunker of a boat he's been fixing up, and someday he wants to sail around the world and get out of Storybrooke.

Astrid tells him to go for it, because "Someone once told me you can do anything as long as you can dream it."


At the town line, Emma is looking over Catherine's abandoned car, and Sidney is there to put the paparazzi spin on her disappearance. He helpfully (?) offers to get Catherine's phone records via his contact at "the office." Of course, his contact faxes these to Regina, who apparently has the only fax machine in town, and she peruses them and finds something "quite helpful."

Back at the Miner's Day setup, Grumpy finds Mary Margaret to tell her he's on board with selling candles. He couldn't help but overhear poor Astrid getting torn a new orifice by the Mother Superior (a.k.a. Blue the Bitch Fairy) over her mistaken ordering of 12 dozen tanks of helium instead of 12. Because of her goof, the nuns won't have the money to pay rent to Mr. Gold, and "You know how he feels about us," Blue reminds her.

What? You mean he hates your snooty, condescending prig face like we do?


Leroy and Mary Margaret will need to sell a thousand candles in order to help the sisters make the rent now, and Leroy is determined to help Astrid in her hour of need.

Back in the mines under the Enchanted Forest, Grumpy - excuse me, "Dreamy" - and his brothers are mine, mine, mining away and Nova is there to collect the fairy dust. She runs into trouble getting a valve to close, and Dreamy comes to her rescue.

Nova unleashes a solid stream of self-loathing, and Dreamy refuses to buy into it. He tells her she can be anything - even a fairy godmother - as long as she can dream it. And the little Disney birds are practically fluttering over their heads as they talk - so freaking adorable, these two. Nova invites him to see the fireflies on firefly hill with her, but he tells her that he can't just go out into the black and tell them he's not coming back. 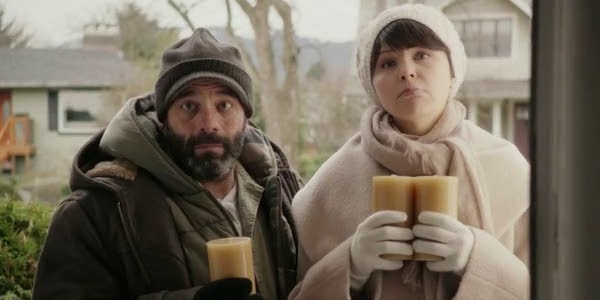 Meanwhile, in a tavern in the Enchanted Forest, Dreamy has got it bad. He can't eat. He can't sleep. He tells Bossy he should probably go see Doc to figure out what's wrong with him, and Bossy replies with tonight's winning line:

"You're gonna trust a dwarf who got his medical degree from a pickaxe?"

Lucky for Dreamy, he's overheard by Belle, who tells him he's in love. She knows because she's seen it. "Love is hope," she tells him. She encourages him to go see the fireflies with Nova. Like a typical clueless male, he had no idea Nova meant "I really want to be closer to you and I really like you" when she invited him to watch bugs on a hill. 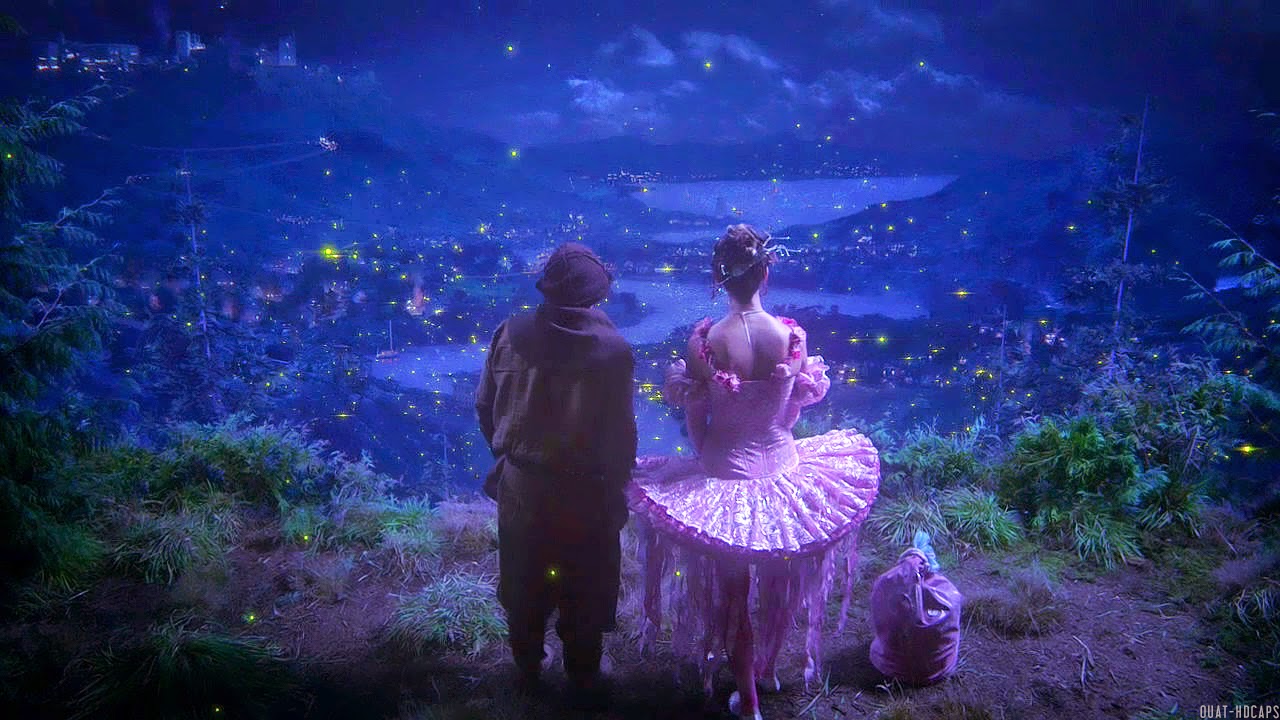 Dreamy goes to firefly hill, and he and Nova talk about how alike they are in their differences. Dreamy has never been out of the ground, and Nova has only seen the world from a distance above. He suggests that they run away together, get a boat and see the world. She kisses him and agrees to run off with him the following night.

In Storybrooke, Leroy can't bring himself to tell Astrid that they haven't sold a thing, so he lies to her and tells her that they sold all the candles - all $5,000 worth. He then offers to sell his beloved boat to Mr. Gold, who turns him down. Astrid shows up at the dock, gushing about how wonderful Leroy is, sees the pallet full of candles and realizes that Leroy lied to her. She's crestfallen, and Leroy feels like a bum.

Flashing back to the Enchanted Forest, Dreamy sneaks out to meet Nova, gets caught by - Stealthy! Oh, I missed Stealthy! Dreamy tells his brothers he's in love with Nova, and they give him his axe and wish him well. He turns it down because he doesn't need it anymore.

On the way to Firefly Hill, Bossy intercepts him and reminds him that he has a responsibility. And Oh...it's the Blue Fairy, and she feels that Dreamy is keeping Nova from her true fairy calling. She uses that cold, fairy logic that landed her the position as the new ministry-appointed Defense against the Dark Arts teacher and convinces Dreamy to give up his dreams and let Nova remain under her control.


Dreamy meets Nova at Firefly hill, and tells her that he can't go with her, that she needs to be a fairy, and that he's not her dream. He cuts her dead, telling her he can't stand in the way of her happiness.

"You are my happiness! I love you!" Nova wails, tearfully. His reply is stony, but doesn't quite cover the pain in his eyes.

Nova is heartbroken, and Dreamy returns to the mines where his axe shows his new name: 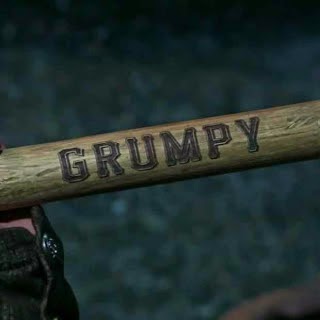 In present day, we see Leroy and Mary Margaret drinking at the counter at Granny's. Leroy tells Mary Margaret to stop her whining and shut her yap. She had love once, and that's more than he's ever had. He leaves her with an ominous "I can only think of one thing to end this pain."

Mary Margaret follows him out only to find him at the Miner's Day festivities, up on a roof. She begs him not to go through with what he's planning. He looks at her incredulously (and Lee Arenberg does incredulous like nobody else, sister) and says:

"Are you crazy? I could hit someone! You know how much damage I could do? I'm solidly built!"

Then he proceeds to knock out the transformer and plunges the Miner's Day celebration into darkness.
A short time later, the candles are officially sold out. Mary Margaret tells Leroy to share the good news with Astrid, to go have his moment. He hands Astrid the envelope with $5,000 in it, and she's thrilled, of course. They share a moment of warm fuzziness that almost makes up for the heartache of the flashback scene. Almost.

Well, if I weren't still burning with hatred for Blue that carries the force of a thousand burning suns.

Across town, Regina confronts Emma and accuses her of covering for someone in the case of the missing Catherine Nolan. Emma assures her that she's not - she questioned David, and she believes him when he says he doesn't know what happened to his wife. His wife that he was cheating on.

And we close out the episode watching as Mary Margaret gets her candle lit by Granny, who previously all but called her a whore and now has forgiven all because of her mad sales skillz. David looks on longingly, remembering the days when he was the one lighting Mary Margaret's fire. Or getting his wick lit. Pick whichever euphemism you'd prefer.

I'm going to give this one five pickaxes out of five.

Dreamy was dreamy, Nova was sweetness and all things good, and the adorable factor was beautifully offset by THAT HORRIBLE BITCH BLUE WHO CAN DIE IN A MAGICAL FIRE THAT NEVER STOPS BURNING HER ENTRAILS FROM THE INSIDE OUT.