Once Upon A Time - Season 1, Episode 13 Recap: Princess Not-So-BitchyToes And Slut-Shaming In Storybrooke 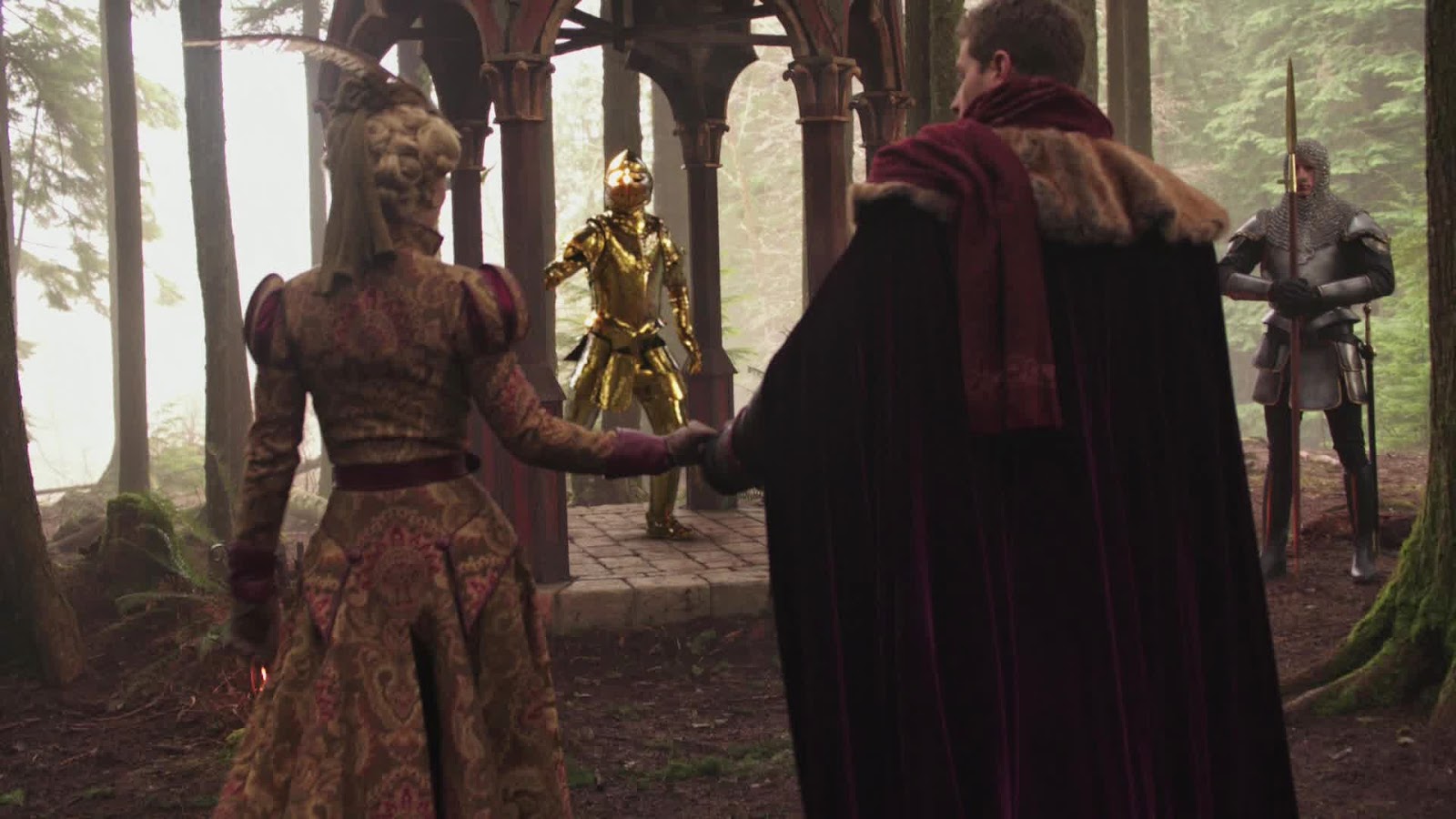 We begin tonight with that magnificent, steely-eyed bastard George, ordering his guards to find that rebellious faux kid of his and bring him back for his forced wedding to Midas's daughter, Abigail (a.k.a. "Princess BitchyToes"). The erstwhile Prince has disguised himself as a middle aged Russian woman (complete with red babushka) and taken a really fast horse, hoping to get to Snow before they catch up.

Meanwhile, back in Storybrooke, Princess BitchyToes' other incarnation, Catherine, is trying to convince David that they need to move to Boston. She's applied to law school via the post that cannot possibly deliver or pick up from a town that doesn't exist, and she thinks a fresh start is what they need.

Flashing back to the Enchanted Forest, Princess Abigail finds Prince Charming and stops him. It turns out to be not so bitchy after all - gee, who'd've thunk? She's willing to help Charming get away because she doesn't love him either. Damn. She's just a sweetheart - I mean, really. Can't even hate the girl.

And that, ladies and gentlemen, is what makes the writing on this series shine sometimes. Real life is rarely black and white, and when they embrace all those nuances, when good people get hurt even when they try to do the right thing (or choose to do the wrong thing for the right reasons), it really eats you alive.


In Storybrooke, however, David tells Mary Margaret about Boston and she tells him he has to shit or get off the pot. He swears to her he'll tell Catherine all about their torrid hot sex together that very night.

Over at Granny's, our obtusely hot new writer friend hits Emma up for that drink she promised him. She demands his name and he obliges, supplying her with the pretentious moniker of "August W. Booth." He tells her to meet him back there at eight for their "date."

Emma then settles in for coffee with Mary Margaret, who finally, shamefully, confesses her love for David. Emma tells her that's old news, especially since she's been staying out late and changed from a "top button kind of girl" to a sultry schoolteacher with plunging necklines. Snow asks why Emma didn't let her know that she knew and Emma replies with tonight's winning line:

Back at the Nolan place, David tells Catherine he can't go to Beantown and play like he loves her. She's obviously upset and asks simply for the truth. David wussies out and doesn't give it to her, giving her instead some song and dance about "something preventing him from connecting" instead of telling her his something was connecting with Mary Margaret's something on a regular basis.

Zooming back to the Enchanted Forest, Abigail shows Prince Charming the best way to get the hell out of Dodge, and gives him provision. Charming gets all up in her face demanding to know why she's being so nice, (instead of, y'know...just accepting her damn kindness, the ungrateful prick). She confesses that she once had true love, as well.


Prince Charming swears to make a trip to Lake Nostos, home of a wicked Siren and magical water that can restore Abigail's prince to human form again.

Now we see someone - ooooh, it's August! - pulling the storybook apart and inserting new pages into it. What the hell? Did he write the book? And if not, why is he changing it?

Our deliciously evil Regina, meanwhile is giving Henry a handheld gaming system circa 1990, hoping it'll replace his need for the book and keep him from being so damn depressed. Henry tells her he'll perk right up if she lets him see Emma. Regina's saved from having to address that when Catherine shows up, wailing about David.

Regina lets the cat out of the bag about David and Mary Margaret's affair, and she even - conveniently - has pictures of the two of them, taken by Sidney, of course. Catherine is devastated. Regina reaffirms that she wants, really, really wants Catherine and David to work it out, but Catherine takes off. hysterical and sobbing.

David calls Mary Margaret to let her know he talked to Catherine, ringing her at work just as Catherine shows up, smacking the everloving bejeezus out of Snow's face. Catherine lets Mary Margaret know that David is a massive, lying pussy before she storms off with a "you two deserve each other" over her shoulder.

(Does that sound bitter? 'Cause I'm not bitter.) 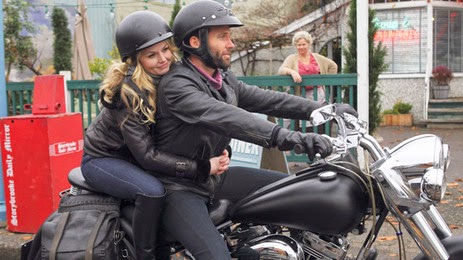 Over at Granny's,August pulls up on his bike, telling Emma to take a leap of faith and hop on his bike so he can take her for that drink. Emma wraps her arms around his sexy hot sexy writer sexy self that is sexy, and he drives her to the wishing well on the edge of town. Water from that well is fed by an underground lake that has magical properties. If you drink the water from the well, something lost will be returned to you.

Emma thinks that sounds like a crock, but August tells her it's on the plaque. Read the damn plaque, lady. And why are you bitching when a hot guy takes you on a thoroughly romantic first date to a magical wishing well. Sheesh.

Across town, things aren't so rosey. Mary Margaret does the walk of shame down main street. And Granny slut-shames the hell out of her. It ain't easy being a homewrecker.

Meanwhile, at Lake Nostos, the siren of the lake shows up, glowing and gorgeous. This is one watery tot who won't be lobbing swords. She's got other ideas. And for a siren, she sure doesn't want to use that mouth to sing.

When our Prince rebuffs her advances, she transforms into Snow, Charming is overcome and starts macking on her hard, following her as if in a trance, into the water. He realizes that this is an illusion, because this kiss doesn't feel anything like real love. 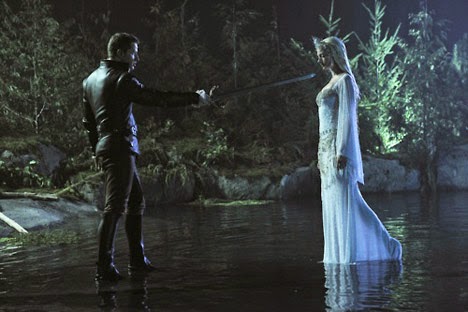 The siren gets pissed and drags him down anyway, trying to drown him in the depths with magical, binding sea vines (again, instead of with her voice - some siren, huh?) but he finds a dagger at the bottom of the lake and stabs her, freeing himself from her clutches.


Back in Storybrooke, somebody wrote "TRAMP" on Mary Margaret's car and David is gallantly trying to sponge it off before she sees it - but it's too late. She call him on his lies, and gets all pissy with him because everyone is calling her tramp and somehow it's all his fault (even though she was half of the adulterous duo). She tells David this isn't love, and ends it.

Emma is having better luck now that she's back from her date. She finds the storybook in a waterproof box under her car, obviously planted there by August, who wants her to think the well water worked.

Down at the mayor's office, Catherine's looked at the adulterous pics and had decided that she wants David to look at her like he looks at Mary Margaret. She realizes now that she never really loved him and he never really loved her. She asks Regina if she's ever been in love and Regina answers with a loaded, "Yes. Once." Catherine tells Regina that she's leaving, and she left letters for David and Mary Margaret, telling them that they should be together.

'Cause that's what betrayed women do in Storybrooke. You find out your husband's having an affair, and you tell his mistress it's all okay by you since they love each other and just merrily move on with your life. (And I'm speaking retro-actively, of course. You'll see this theme again).

Talk about a fairy tale. Excuse me a moment.

Returning to the Enchanted Forest now, where the water from Lake Nostos does the trick, and poor Frederick is human again. Charming reminds Abigail that "True Love isn't easy, but it must be fought for." Abigail wishes him luck and warns him about George and the fact that "some people will stop at nothing to destroy the happiness of others."

Cue Regina, breaking into David and Catherine's house in Storybrooke and taking the letters Catherine had left for the lovebirds. She gets a lighter from a drawer (conveniently right next to the can of "Whore Shaming Red" spray paint) and burns the letters.

And then comes one of my favorite moments from the show. Mary Margaret is laying in bed, devastated over her breakup with David, even though it technically was the right thing to do (and we all know it's not that simple because, y'know...true love). Emma enters and they have this exchange:

And then Emma lays down next to her, and we see mother and daughter, side-by-side, sharing a moment in silence. Just plain supporting each other. This is one of those little moments that knit lives together, and when they do it right on this show, it really shines.

Finally, we see Catherine driving toward the town line. Behind her is the Storybrooke alter-ego of Prince Frederick, (the school soccer coach) who finds her abandoned car just at the town line, crashed and with Catherine nowhere in sight.

I give this episode four wishing stars out of five.

There were some nice mystical elements, lots of heartache for good people, mysterious August and his intimate knowledge of the book, and ooooh so evil Regina.
By Ellie DeLano - February 19, 2012