Once Upon A Time - Season 1, Episode 12 Recap: Beauty And The Bilious CGI Glow Of The Unexpected Beast 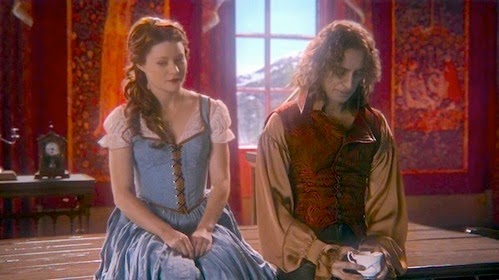 This week's episode give us the story of Belle (played by the ungodly beautiful Emilie de Ravin) and her beast, introducing us to one of the biggest head-swirling mashups in the Once Upon A Time universe when we realize that her beast is none other than Rumplestiltskin.

At the start of the episode, Belle is closeted with her father, a former linebacker with a kiwi accent, and her fiancé Gaston, who's overbearing but not nearly as narcissistic as his cartoon counterpart (and not nearly as fun). Belle is lovely and brave and agrees to go willingly with Rumplestiltskin, who demands her as the price for his help in defeating the ogres.

Flash forward to Storybrooke, where we see Belle's father (a.k.a. "Moe French"), who is now the owner of the local flower shop (wonderfully named "Game of Thorns") pleading with Mr. Gold, who is repossessing his work van in lieu of payment. Gold obviously owns this whole town.

Gold runs into Regina, who demands that he make time for a conversation. She's obviously catching on to the fact that he has an agenda here, and it includes Emma. Gold tells her the conversation is going to have to wait, and employs the magic word: please. Regina's eyes narrow - that's the second time he's gotten out of a conversation that way, and she's starting to have serious suspicions.


Meanwhile, at Granny's, Mary Margaret sits across from David, who is reading her book recommendation. She's there to meet Emma for lunch and while they chat about the current situation with Henry, Mary Margaret reminds Emma (with a sideways glance at David) that "people who are supposed to be together - they find a way."

In walks Ashley (a.k.a. Cinderella) and she's having some serious post-partum depression because it's Valentine's Day and she's stuck at home changing diapers while her prince is working double-shifts at the cannery. Ruby suggests a girl's night out and Ashley and Mary Margaret are in, while Emma the perpetual sourpuss has to leave due to a call from the station (and who the hell made that call? She's the only employee now that they killed off Sheriff Mancandy). It turns out an alarm was triggered at Mr. Gold's house, and Emma runs into Gold when she investigates.There are "things" missing, and Gold tells her that Moe French is the likely culprit.

Back in the Enchanted Forest, Rumple shoves Belle in her cold stone prison cell, and later, he runs down the list of her duties in the splendor of his CGI-illuminated castle. I know we see a lot of green screen in this show, but Rumple's castle is a prime example of when it just looks...odd. The light is strange and it does strange things to their skin. Speaking of skin, Rumple has an awesome chore for Belle:
Belle drops his cup, chipping the side in an awwww-inducing callout to the animated movie. Rumple assures her it's not a big deal. She goes about cleaning the castle and they slowly begin to get to know each other, letting their guard down and we see Belle literally and figuratively letting the light in to Rumple's life. 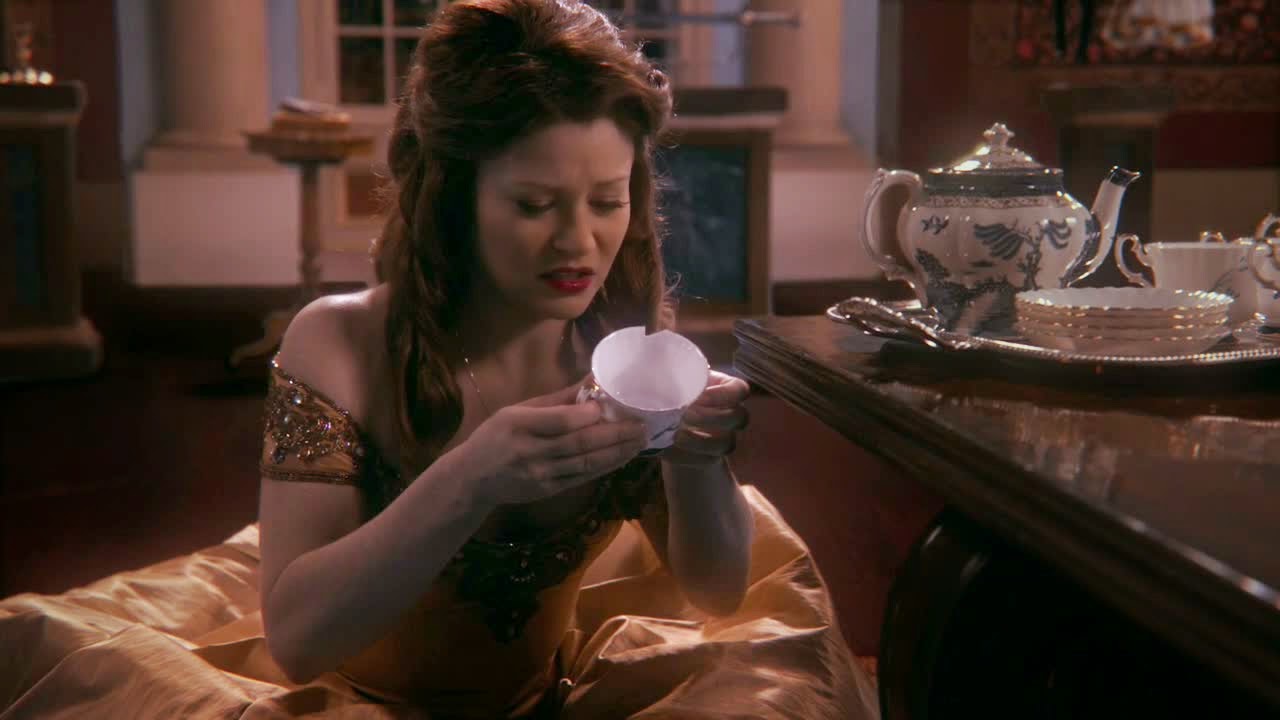 Which is good, because that horrible, sallow CGI glow on their skin is really kind of nauseating to look at. Belle has snooped around and found clothing for a boy. Rumple reluctantly admits that he once had a son, and he lost him - along with the boy's mother. Belle is genuinely sorry for him, and realizes with some surprise that Rumple was once an ordinary man. She tells him that she doesn't believe he's a monster - moments before he wipes her former fiance' off the map and turns him into a long-stemmed rose.

Once Belle unknowingly stuffs her fiance's corpse into a vase, Rumple asks her why she chose to come with him, and she admits that it was heroism. She's always wanted her chance to show the world that women can be brave. She admits that Gaston was an arranged marriage and she believes that love is layered and she couldn't give her heart to someone like Gaston.

Rumple, realizing he's got a gem of a girl, sends Belle to town, fully expecting to never see her again.

Flashing forward to Storybrooke, Emma recovers most of the stuff Moe stole, but not the most important thing (which, of course, Gold won't talk about) and not Moe himself, either. Gold finds that unacceptable, and decides to do his own detective work.

Across town at the bar, the girls are out, and Ruby tells Ashley to cheat on her baby daddy, but Ashley, like a good little princess, stays true.


Meanwhile, Mr. Gold has found Moe French. After a brief stop at Sneezy's drugstore where he runs into David (who is buying two Valentines's cards), he walks out to the florist's van, where Moe lies bound and gagged inside. He takes him to the deserted cabin in the woods that Mary Margaret and David previously almost sort-of fornicated in (and most likely have fornicated in since).

Flying back to the Enchanted Forest again (damn, this show skips around a lot. How many times can you write "meanwhile" and "back in ___?" Sheesh.) Evil Queen Regina sees Belle walking to town and stops her carriage to walk with her just so we can fully appreciate another magnificent outfit.

She asks Belle if she's looking sad because she's running from her Master or her Boyfriend. Belle can't really answer that, but she does confess that she cares for Rumple, despite the darkness that obviously has him in it's hold. Regina is "kind" enough to tell her it sounds like Rumple is under a curse, and perhaps a true love's kiss could help.

Regina suggests that true love's kiss will break any curse, and Belle returns to the eye-raping CGI glow of Rumple's castle, cozies up to him and plants a big ole smooch on his lips, turning his skin a nearly normal flesh-tone (bathed in bilious CGI light) right before he breaks it off, realizing just what she was up to. 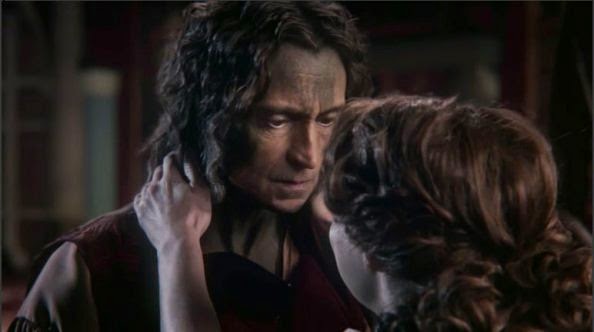 Rumple wants nothing of love - not if it will rob him of his power. He knows Regina is behind this and he throws Belle into her cell, accusing her of tricking him and working on Regina's behalf. No matter how much she protests, he won't believe her, screaming in her face that "No one! No one could ever love me!"

Chills. Just...chills. Oh, Bobby Carlyle. What you do to me.

Moving back to Storybrooke, Gold is torturing Moe, demanding to know where he took it, and who he gave it to. Moe refuses to answer, and Gold starts savagely beating him with his walking stick, shouting:

"You had her love and you shut her out! She's gone forever and it's your fault! You are her father!"

And once again, as I'm retro-reviewing, I see clearly the correlations to Rumple's own self-hatred. What a powerful scene. We also see Rumple simultaneously in the Enchanted Forest trashing his castle in a rage, obviously heartbroken. He comes upon the chipped cup, but refuses to break it, choosing to cherish it instead.

Over at the bar, however, Girl's night is turning maudlin and sad as Ashley notes "What's the point of being together if we're not together?" (Zing! That one obviously hits Mary Margaret where it hurts). Ashley starts to leave only to run smack into Sean (aka her prince) who has an armful of roses and an engagement ring. He drops to one knee and proposes, as Mary Margaret looks on, happy for her friend but sadder than hell that it can't be her.

She leaves the bar, finding David waiting for her on the corner. He sheepishly admits he was checking up on her so she wouldn't find somebody else. He hands her the Valentine's card and in a boneheaded  stupid male moment, gives her the card he meant for Catherine.

She tells him to go home to his wife.

Flashing back to the Enchanted Forest, Rumple tells Belle to get the hell out of Dodge. As a parting shot before she leaves, she reminds him that he could have freed himself, if he could have only believed that someone could want him. She calls him a coward. He glares at her and utters a sad and terrible truth:

"My power means more to me than you."

And she replies with another equally sad and terrible truth:

"All you'll have is an empty heart and a chipped cup." Then with her head held high, she turns on her heel and goes, walking out of his life, probably forever.

Meanwhile, back at the creepy deserted cabin of fornication, Emma catches Gold being the everloving fark out of Moe French and has to arrest him for assault. After hauling him down to the station and putting him behind bars, Emma offers Gold half her sandwich, hoping it'll cover that "favor" that she owes him. He declines, reminding her that when he does call it in, it'll be a doozy.

Regina strolls in, offering Emma half an hour with Henry if she'll clear out and leave her to talk to Gold. Emma's not stupid - she takes Henry and they're off. It turns out (as no surprise to Gold) that Regina set all this nonsense with Moe up in the first place, and she has the "item" he's been looking for. She agrees to return it, if he'll simply answer one question: "What's your name?"

After a little tap-dancing, he finally leans in and gives it to her: Rumplestiltskin. Making it clear that he is not covered under the terms of her curse, just as she'd suspected.

Regina then returns the item he was so crazed about: a single, chipped cup.

He reminds her that he's the one with the power around in town, but Regina doesn't seem to agree with that. Her murmured "We shall see..." carries a world of undertones.

And in our final flashback of the evening, Regina strolls into Rumple's castle and tells him (wish great glee) that Belle is dead. Her father shunned her because of her association with Rumple, cutting  her off and locking her in a tower where she was tortured until she killed herself by jumping to her death. She exits, swishing that amazing train on her equally amazing dress, as Rumple cradles that chipped cup.

And over in Storybrooke, Regina strolls down to the hospital, heading down the stairs to a secured isolation ward, headed by a Nurse Ratched  look-alike and past the Chief Bromden wannabe to a lone cell, pulling open the observation slot and giving us a glimpse of poor Belle, trapped and alone in her own personal hell.

I give this episode five wishing stars out of five.

Lots of great backstory, lots of Rumple, lots of Regina, and some wonderful Mary Margaret and David angst. I only wish they'd throw a little more at the CGI budget and fix the freaky way the backdrops shade the actors.
By Ellie DeLano - February 12, 2012