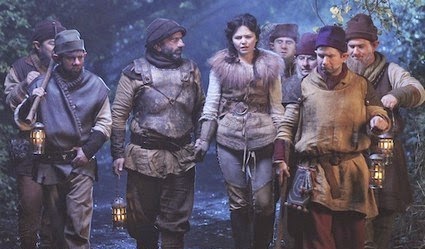 Storm clouds are brewing in Storybrooke, as we begin with our mysterious stranger and his even more mysterious box on his…okay, it's an average motorcycle, but you get my drift.

Henry asks him what he's doing in Storybrooke and what's in the box, and the stranger claims the box has "Something I need to do what I came here for." Oooooh. Obtuse. I like it. Regina spies them talking and goes into full Mama Bear mode.

Meanwhile, back at the apartment, Mary Margaret is rushing off and frothing at the mouth (Ginnifer Goodwin said once in an interview that it's a particular pet peeve of hers when actors fake toothbrushing on screen, so she's frothing and spitting like a pro) because it's nearly 7:15 and she has to get out the door to help at the Science Fair. "We're making volcanoes!" she says, in her best schoolteacher voice.


Only, they're not. It turns out that 7:15 is when David shows up at Granny's to pick up his morning coffee, and apparently, Mary Margaret goes there to wait, pretending to read her book, just to catch a glimpse of him. It's sad and wonderful all at the same time, how obviously, helplessly, hopelessly drawn to each other these two are. Oh, they make me believe in love again. They really do.

Unfortunately, Emma catches her red-handed and has to remind her that stalking a married guy isn't going to lead to anything but heartache. Mary Margaret sighs and wishes that there was some sort of magic cure for love, since it's the worst.

Which leads to a perfect flashback in the Enchanted Forest, where we see Red Riding Hood talking to Snow White, and letting her know that Prince James (a.k.a. "Charming") is marrying Midas's daughter in two day's time. Red reluctantly tells Snow about a wizard who may have a cure for true love.

Snow embarks in a clandestine meeting on a foggy dock with a tiny boat, and seeks out Rumplestiltskin. He agrees to help her in return for a strand of her hair. He gives her a potion that will ensure she wipes all memory of her true love from her mind. Snow balks, but Rumple reminds her that "Love is the most powerful magic of all – the cure must be extreme." She takes the potion with her, but hasn't decided to drink it yet.

Back in Storybrooke, Mary Margaret is shopping at Sneezy's pharmacy, and literally runs into Catherine, who's buying a pregnancy test. Talk about a kick in the gut. And of course, Regina is there to gloat about it. Freaking Regina. I love to hate her.

Almost as much as I love to hate George. Oh, George. You magnificent steely-eyed bastard. He's in the Enchanted Forest, reminding James that he needs to man up and marry Midas's daughter and stop being so moon-eyed over Snow White. George makes it clear that he'll do whatever he has to in order to ensure this wedding.

James sits down to pen a letter to Snow, presumably telling her of his love, and sends it by bird – a guaranteed way to find her.

Flash forward to Storybrooke, where Mary Margaret is out for a morose walk in the woods and comes upon a lovebird stuck in a thicket. She takes the bird to the animal shelter (coincidentally where David works) only to find out that this species of dove forms strong monogamous bonds, and if they don't get her back to her flock, she'll be alone forever. How utterly metaphorical.

David cautions her not to take the dove out – there's a storm coming. Mary Margaret insists, unable to bear the thought of the bird being all alone. David offers to drive her and she turns him down, so of course, he follows her anyway.

Down the road, Regina is enlisting Emma's help ferreting out information on this mysterious stranger. Emma jokingly mentions that he's probably one of the untold people that Regina "cursed," ha- ha, only Regina isn't laughing. She lets Emma know the stranger was talking to Henry, and that's all it takes. Now Emma wants some info as well.

Back in the Enchanted Forest, Snow has just received James's note. He writes that not a day goes by that he's not thought of her – oooooooh! Sorry, but I'm retro-reviewing these episodes and talk about a callback!!! Chills, I tell you. Chills! Anyway, he wants her to come see him and run away with him.
Snow disguises herself as a flower vendor and sneaks into the castle, hoping to see James. Who she finds instead is George, and he promptly tosses her in the dungeon, next to…yay! It's Grumpy!! We get to see her first meeting with her lifelong friends, the dwarves. He's even whistling "Whistle While You Work." *sigh*

Grumpy tells Snow he's stuck in the dungeon because of love, and just as he's reassuring her there's no way out, we get to meet the surprise dwarf: Stealthy!" He frees them both and they're off.
Flash to Storybrooke, where Mary Margaret is braving lightening and gale-force winds to help her bird friend, and ends up tumbling over a cliff, hanging onto a tree root for dear life. Of course, this sets things up perfectly for a dashing rescue by David, who tries to talk some sense into her as the rain romantically pounds down around them. He leads her away to a deserted cabin they find in the woods instead of – oh, I don't know – one of their cars? But hey, the cabin of convenience it is, and of course, there's a fireplace and it's all terribly, horribly romantic.

They both tap dance around the issue until Mary Margaret confesses that she goes to Granny's every morning to see him, and he confesses that he goes to Granny's for the same reason. He leans in for the kiss, and Mary Margaret tells him they can't do this – especially with Catherine possibly being pregnant. This is news to David, who is visibly jolted by the revelation. The sun finally comes out and luckily, the flock is just overhead. Mary Margaret releases the dove, who finds her flock, and David reaches down, taking her hand. He wants to see where this crazy thing is taking them, but Mary Margaret is understandably reluctant to take that ride. She leaves him behind, determined to take the high road.

Back in the Enchanted Forest, George has caught up with Snow and the dwarves, and he promptly offs Stealthy. Aw. I liked that dwarf. He's about to slice and dice Grumpy, too, but Snow gives herself up to save him. 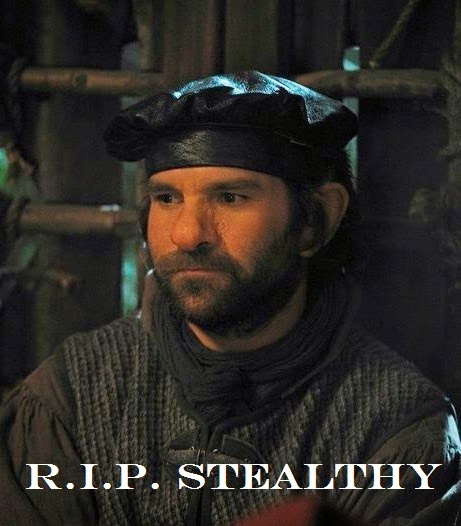 Emma, meantime has cornered our mysterious stranger in a booth at Granny's, and so far, he's got a glib answer for everything. She demands to know what's in the box. He makes her a deal: he'll 'fess up if Emma lets him buy her a drink. She agrees, and he opens the box to reveal….a typewriter? He confesses that he's a writer, and he's in Storybrooke for 'inspiration.' Emma asks about her drink and he leaves her hanging, telling her he'll take her up on it sometime. Oh, I adore this guy. So delightfully enigmatic.

And now we're back to George and his ringing, acidic tones. He tells Snow he's going to kill James if she doesn't tell him she's over him and doesn't love him anymore. He wants Snow to break James's heart. George makes it clear that he has no qualms about killing his own son, so Snow does what she has to do. She tells James she's never loved him and she walks away with her head held high, and the tears filling her eyes.

So ungodly, dramatically beautiful. Her buddies, the dwarves rally around her, and they offer her a home. Snow starts to take the potion, so she can get over her broken heart, but Grumpy reminds her that her pain is part of who she is, and stays her hand. They've got her back, and she's got a family now.

Meanwhile, in Storybrooke, David confronts Catherine about her possible pregnancy. She confesses that she's taken the test and it's negative. She also says she feels like he's there but he's not. She was also more than a little relieved when the test came back as a no and asks David if he'll go see Dr. Hopper with her, and work on their marriage. He agrees to try. Catherine reminds him that it's 7:10 – time for him to go get his coffee. David responds by telling her he's staying in – with her. He'll go later.

Back at the apartment, Mary Margaret is looking at the clock – it's 7:18, and she's not going to Granny's. You can see on her face how torn she is by it, and Emma reaches across the table, and silently takes her hand – another one of those wonderful, connecting moments that they throw in so beautifully and hit you right where it counts.

Flashing back to the Enchanted Forest, where we see James saying "Eff it! And riding off to find Snow anyway, and Grumpy rushing into Snow's bedroom to tell her the royal wedding is off and James isn't marrying Abigail, only to have Snow ask "Who's James?"

Then we're back to Storybrooke again where we see Mary Margaret at Granny's and she accidentally runs into David. He follows her outside and she castigates him, telling him that she was trying to avoid him by coming later. He tells her he was only doing the same thing and they both realize they just can't get away from each other. David lets her know that Catherine isn't pregnant, and the sparks fly and blammo – they're kissing the everloving stuffing out of each other in the middle of the busiest street in town, right across from Regina, who's more than a little unnerved seeing the two people she vowed to rip apart find their way right back to each other. 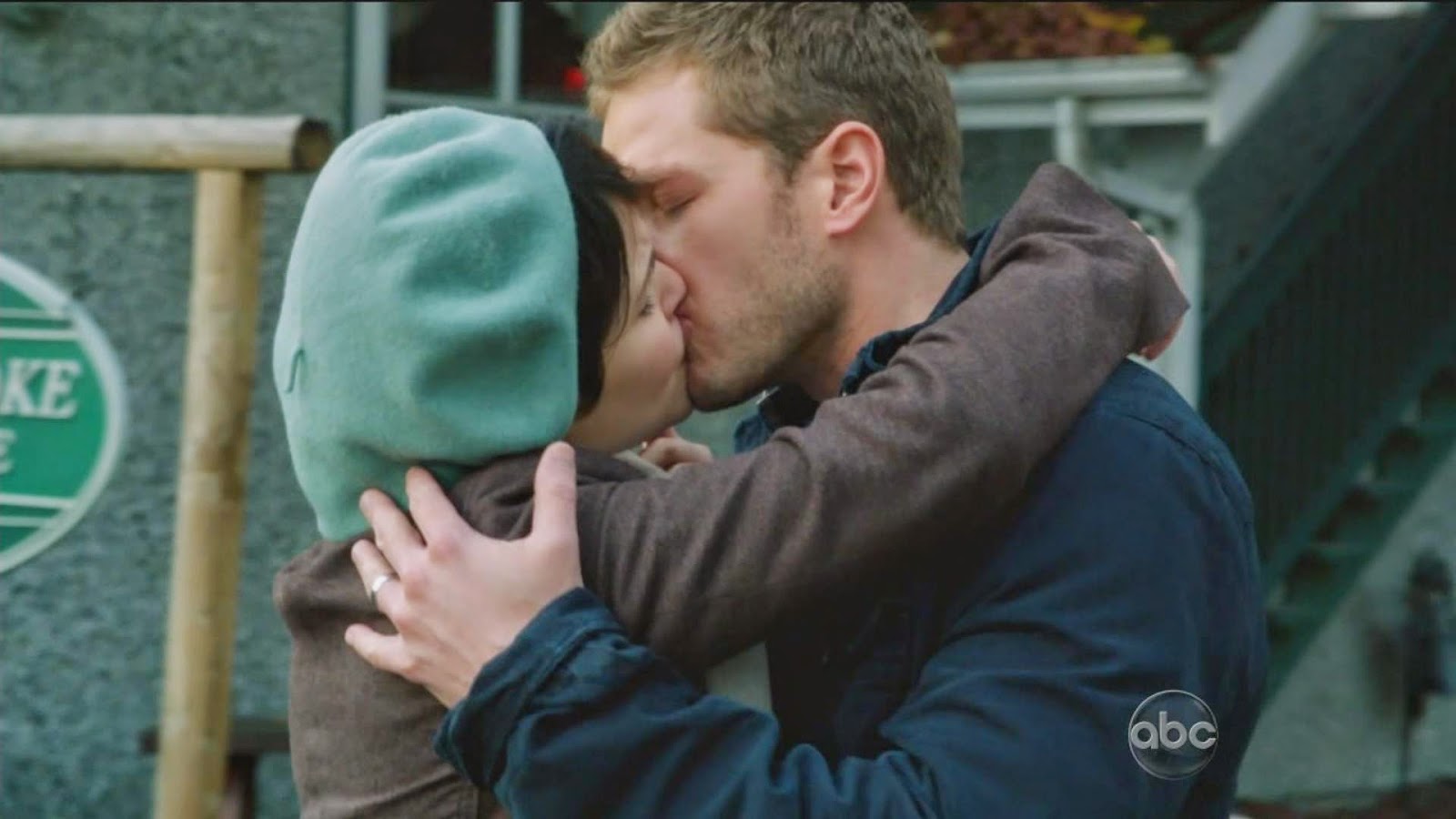 I give this episode five wishing stars out of five.

I swear to God, you can see Josh and Ginny falling madly, crazily in love. And I'll always have one eighth of my heart reserved for Stealthy.
By Ellie DeLano - January 22, 2012