Once Upon A Time - Season 1, Episode 7 : The Episode Whereupon I Wish The Writers A Fiery And Gruesome Death 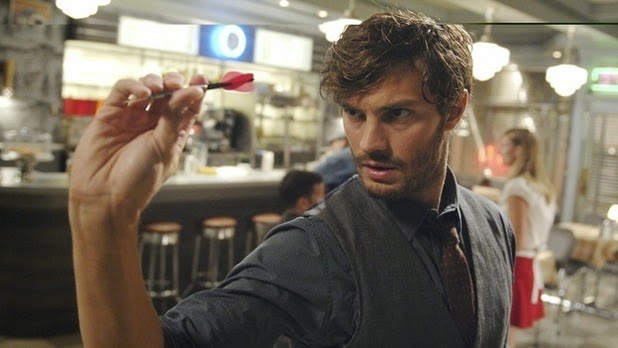 We open the episode with one of my favorite Storybrooke plot points: The DartBoard of Hot Manflesh. You'll see this appear again a few more times, and other than one brief moment with Emma, there's always an insanely hot guy playing with those darts. I need one of these dart boards. Now.

Emma runs into Sheriff ManCandy Graham at Granny's and he wants to explain why he's banging the mayor, even though he doesn't exactly know why himself. Emma shuts him down cold, Graham kisses her and something freaky happens - he starts to remember. Wow, Emma, those are some magic lips.

Not that I ever doubted it, of course.


Emma storms off and Graham makes his way to Regina, wanting oh-so-badly to just feel something. He pins Regina to the wall and ohhhhhhh my. The look on her face. DAYum.


Flashback to the Enchanted Forest, where we see Regina, gloriously resplendant in her wicked queen wear, comforting a grieving Snow White over her father's coffin. We can see clearly that this is cold, empty comfort, confirmed a moment later when we see Regina plotting Snow's demise and confessing to the murder of the King.

She decides she needs a cold-blooded killer, since Snow is so beloved among those of the kingdom. Her deliciously devious magic mirror shows her a huntsman chasing a really bad CGI deer (were there no petting zoos nearby? You couldn't rent one for the day?)

Our huntsman Hunksman turns out to be none other than Sheriff ManCandy Graham, who wakes up in a rush in Regina's bed, and tells her about his vivid dream of being a huntsman. Regina tries to lure him back to bed (and who can blame her, amiright?) but he tells her that dream felt like a memory, and he rushes out, leaving a worried Regina behind. On his way to the car, Graham  sees a wolf - the very one from his dream, who, it turns out, is an old buddy.

Over at Snow's place, Emma comes downstairs in the morning and finds flowers on the table and immediately assumes they're for her because she's so damn hot and Snow is so schoolteachery, but it turns out Dr. Whale isn't a total lout and he sent Snow flowers the morning after he banged her.

Snow and Emma have a talk about walls and closing yourself off, and Snow calls Emma out on her obvious feelings for Graham, giving her a prophetic warning about walls keeping out pain but also keeping out love. 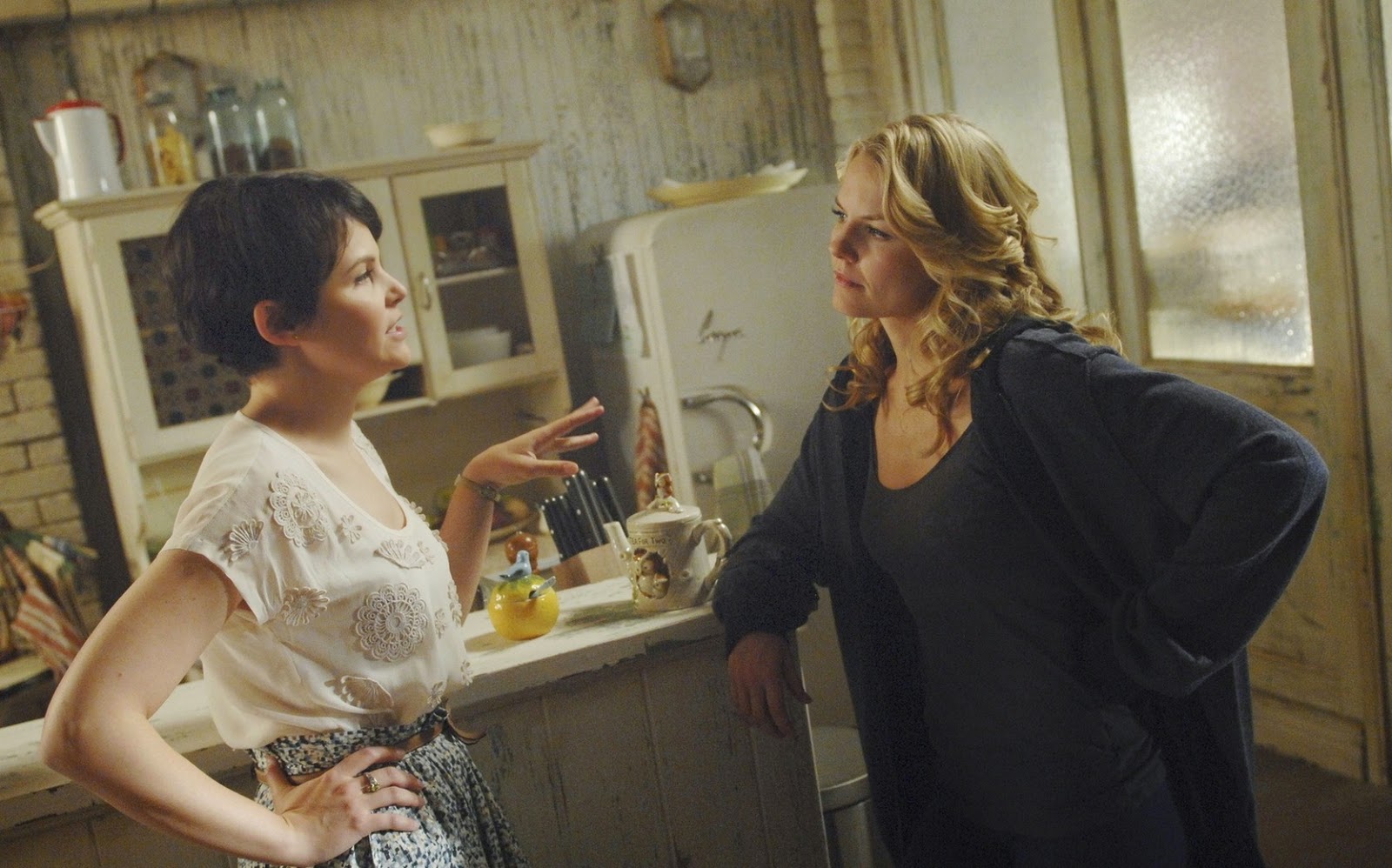 Somewhere on the other side of town, Graham has followed his wolf buddy into the woods, where he runs into Mr. Gold who has shovel and may be burying a body, but Graham doesn't bother to ask him about it. Instead they have a philosophical discussion about the nature of dreams.

Back in the Enchanted Forest, we see Graham the Hunksman defending his wolf buddy after a bunch of drunken idiots in a tavern give him a hard time, and it turns out the Hunksman is a real softy when it comes to animals, because they are pure of heart. He kills a couple of the jerkwads and that brings him to Regina's attention, because he did it so quickly and cold-bloodedly.

She offers him a deal: kill Snow White and I'll give you riches - make you my royal huntsman. The Hunksman tells her to piss off - he doesn't want her riches or her, for that matter, which shows remarkable fortitude because Regina looks spectacular in that dress. Holy cow. Finally, they come to an agreement. She gives all wolves protected status across the kingdom, and he'll carve the heart out of whomever she'd like. 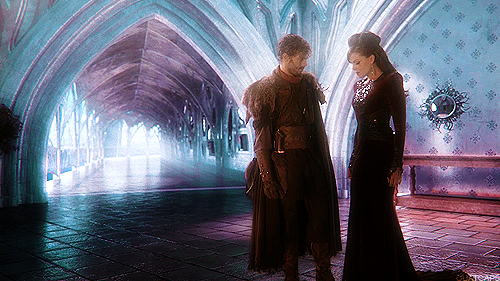 Flash forward to Storybrooke again, and Graham's wolf buddy comes over for a pet. Once he touches the wolf, he gets a startling vision of Mary Margaret (as Snow White) and decides to seek her out, giving her a rambling story about knowing her in another life. They both remark on how crazy it is that neither of them can remember how they met each other - or anyone in this town. Hmmm.

Oh well, that's just life, says Mary Margaret, who's clearly not as bright as her alter-ego, Snow White, who is walking through the Enchanted Forest with the Hunksman. It turns out Snow isn't as sweet and guileless as we were led to assume. She knows Regina wants her dead, and figures out that the Hunksman is there to kill her. She manages to escape and flees into the woods.

Down at the Sheriff's office, however, sparks are flying - Regina confronts Emma because she knows Graham's macking on her. She tells Emma to stay away from her ManCandy - or else. Ooooh! Catfight's a-comin' folks! Get yer popcorn now!!

In the Enchanted Forest, we now see the Hunksman, who has tracked down Snow White. It's not hard to do because she's sitting on a log and writing a letter instead of fleeing for her life. I know, Snow - it's hard to run from a face and a body like his. The Hunksman reads her heartfelt letter of forgiveness for Regina, and spares her life, telling her to run. 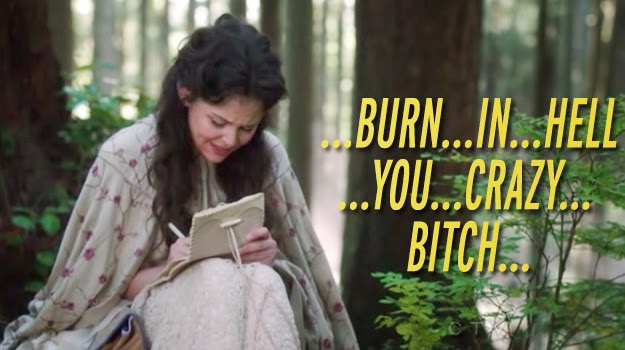 This segues right over to Storybrooke and Henry, who gives Graham the lowdown on the magical storybook. Henry figures out that Graham is the Hunksman (right after chastising him for smooching his mother), and Graham believes it all. Henry says Graham and Emma have a special connection - after all, the Hunksman spared Snow White, therefore saving Emma's life, too. He also lets Graham know that the Evil Queen ripped the Hunksman's heart out and put it in a vault - the same vault Graham saw in his vision.

He doesn't, however, discuss the R-rated fact that Regina not only ripped Graham's damn heart out, but turned him into her own personal sex slave. Oh, yes, she did. And I had to pause the episode so that I could get something cold to drink. Raawwwr. We also finally learn the reason Regina hates Snow White: Snow betrayed a secret that cost Regina someone she loved. Heavy.

Emma tracks Graham down, offering to help him. He's jabbering about dreams and hearts and wolves in that lilting Irish brogue and Emma is clearly overcome, sliding her hand over that juicy pectoral of his in order to prove he does indeed have a heart. Sure, he does, Emma. A nice, muscular, incredibly HAWT heart.

But wait! The wolf appears and now a startled Emma helps Graham chase it down. The wolf leads them to Regina's family mausoleum, and Graham begs Emma to help him find his heart, sure that it's in there. Emma looks at him like he's Mr. Crazypants, but she agrees. They don't have any luck, unfortunately, and end up running into Regina, who's less than thrilled to see the two of them together.

Pull up a chair, folks - the catfight is on!

Regina grabs Graham and tries to lead him off like he's her personal love-slave because, well...he is, and he grows a pair of balls where his heart used to be and tells her no. He breaks up with her right there in front of Emma. Regina blames Emma, of course, who gets right back in her face, rubbing it in that Regina makes all the men in her life miserable and also reminding her that Graham laid those luscious lips on her. The gloves come off - and they end up slugging each other in the face. Graham leaves with Emma, and Regina, wiping her bloody lip, is seriously unhappy.

Back at the station, cue the heart-tugging music as Graham takes care of Emma's bruises, and they share a tender moment, talking about feelings and love versus sex. It's incredibly intimate and sweet and oh, so wonderful when Emma finally gets over her fears and steps up, leaning in and allowing that relationship to move forward. Graham's lips meet hers, and suddenly, vividly - he remembers it all. Every single moment of his past life. She has broken the curse for him, and he remembers it all.

For about two seconds.

Because back in her vault, Regina has found Graham's heart, and she crushes it into dust in her fist. Graham hits the floor, with a distraught Emma screaming his name, and we're all screaming with her.

Not Graham! Not Sheriff ManCandy! Not my Hunksman!!!

I may be retro-reviewing these episodes, but I swear to you, it's still just like a fist in my gut. I know they had to remove Graham to prepare Emma for other...people...but still. Oh, Graham. I wrote him into a fanfiction once just so I could pair him up with Red, who I think is his perfect counterpart. They had twins - Selena and Romulus. *sigh*

Guess he only lives in my fanfiction fantasies now.