Once Upon A Time - Season 1, Episode 6 Recap: Sometimes The Secondary Characters Steal This Show 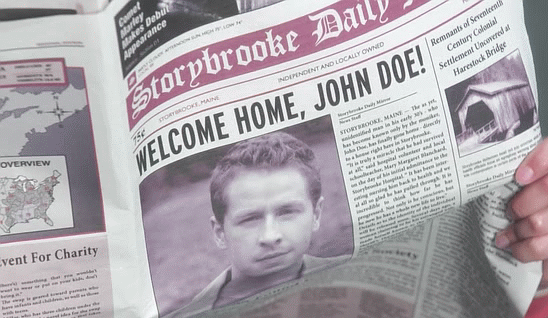 We begin the episode with Catherine, sweet, loving Catherine, throwing her amnesiac husband who's been in a coma for as long as anyone can remember a great big party. 'Cause he's sure not to have any social anxiety or anything, coming back to reality like this. Henry theorizes that David is immune from the curse because of his amnesia.

Regina, on the other hand, is doing some girl-bonding with Catherine, trying to convince her to work harder at making things work with David - mostly because she knows David belongs with Mary Margaret, and Catherine takes a moment to thank her for being a good friend. This is one of those wonderful, subtle moments where Lana Parilla really shines. Instead of going for the smirk behind Catherine's back (because her plan is working), she chooses to let us see her vulnerability at the mere mention of the word "friend." We get the feeling that Regina hasn't had many in her life, and her heart can't help but respond to the promise of that word.

David leaves his party, seeking out Mary Margaret, and valiantly leaping her white-picket fence (like a princely boss) to get to her. David confesses his attraction, but Mary Margaret reminds him that he's married and shuts that nonsense down.

Flashback to the Enchanted Forest, where we see David dueling a mammoth giant of a guy and killing him like a badass. Only it turns out it's not David, but his twin brother, James, and oops! He sorta forgot to check and see if the brute was dead. James ends up on the receiving end of a world of hurt and shuffles off his mortal coil, much to his father's chagrin. James had been set to kill a dragon that was plaguing King Midas's kingdom, in return for an assload of gold (which his father reminds him they so desperately need). Without James to slay the dragon, the gold won't be there, and King George is screwed.

I want to add here that George is also one of my favorite characters in the show. They sort of fizzle him out later (because the actor was cast elsewhere) but damn, I miss him. I forget how much until I watch season one and two again. He's so cold and just....cold. A cold-hearted son of a bitch. Steely-eyed and scathing and tough and .... 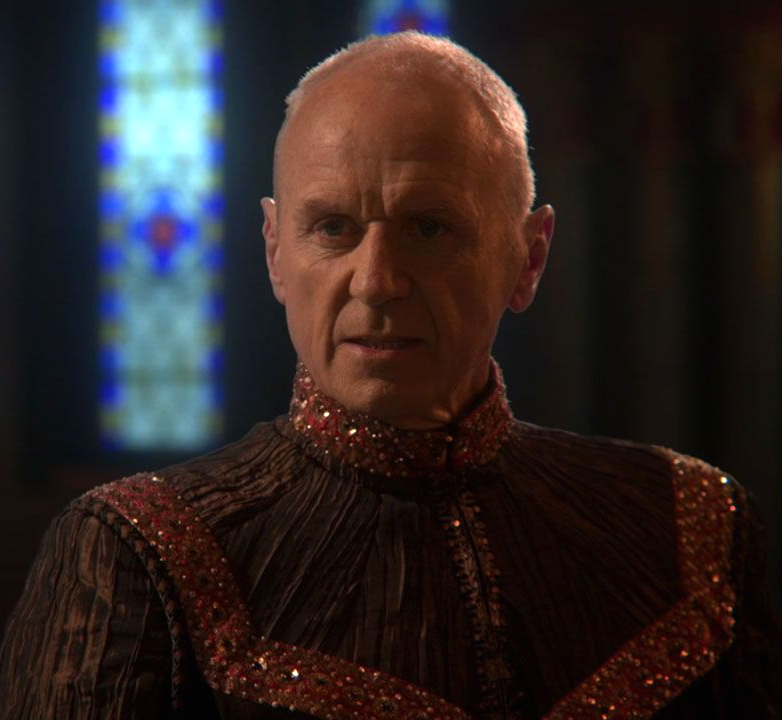 Is it warm in here? Whew. I do love a forceful man.

Anyway, George makes a deal with good old Rumpletstiltskin, who suddenly remembers that the son he gave George as a baby (James is adopted) has an identical twin brother. what a coincidence! (Get used to 'em folks, this show is all about coincidence). George tells Rumple to fetch the brother, and we're off to meet David.

Back in Storybrooke, Mary Margaret and Emma share a drink and talk about love and relationships. It's a strange twist to see the daughter advising Mom on life and love, and of course, neither of them have any idea about their real relationship, but it's a wonderful, warm moment all the same. 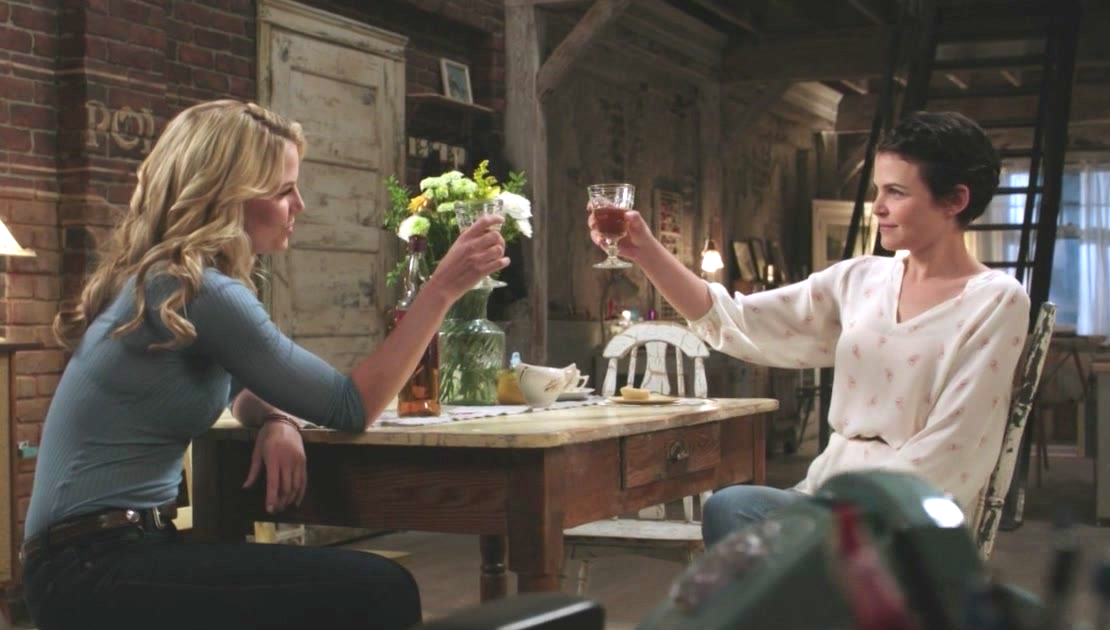 Over at the Nolan house, David is leafing through photos, trying to remember, and Catherine, sweet, loving Catherine, invites him upstairs for some naked bonding time. David tries, he really does - he even kisses her, but pulls back, telling her it isn't right.

Meanwhile back at the old homestead in the Enchanted Forest, we get to meet one of my all-time favorite characters: David's mother, Ruth. Mom's doing her best to fix her little boy up with the grain merchant's daughter, because she's got a dowry that will save the family farm. David tells her that he's going to marry for love, not money, and he'll find a way to save the farm. Cue Rumpletstiltskin, with an offer they can't refuse.

David is understandably upset with Mom for giving his brother away, no matter how poor and starving they were, and he works out a deal with Rumplestiltskin: he'll stand in for James, the king will reimburse him handsomely, and the farm will be saved. David takes off to slay the dragon, even though he's never been more than a shepherd. 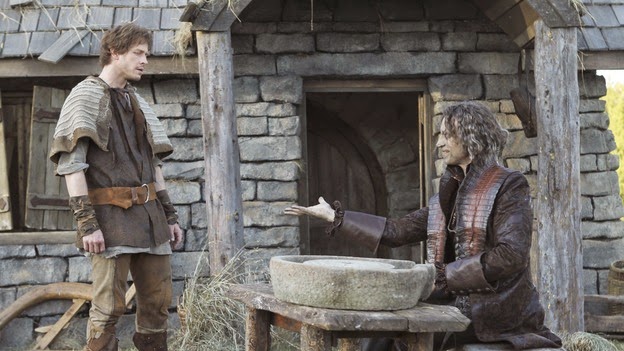 In Storybrooke, Regina confronts Mary Margaret and tells her to stay away from David - who it turns out has left his wife - and Regina cautions her not to be a homewrecker and let David get back with Catherine. Mary Margaret is stunned at the news.

In King Midas's camp, however, we flashback to see David, surrounded by soldiers who are going to do his dirty work with the dragon for him, especially since he can't even fasten his armor correctly. I know he's supposed to look out of his element here, but DAYum. Josh Dallas was just born to wear armor, I swear to God. He looks princely in just about anything. The soldiers get pinned down, and David uses his smarts and his brawn, drawing the dragon out and slicing off its head.

Moving back to Storybrooke, David finds Mary Margaret again, confesses his full feelings, and lets her know he left his wife. He wants Mary Margaret to give him a shot and he asks her to meet him at the Toll Bridge later that night, if she's willing to go for it. "Choose this....choose us...." he says, with those sparkling blue, endearing eyes roaming her face, and she caves like a house of cards.

Meanwhile, Sheriff Mancandy Graham is bribing Emma with donuts, begging her to work a night shift. Frosted things and Sheriff Graham. What more does a girl need in her life?


Moving back to the Enchanted Forest, we see David presenting his dragon head and planning to go on his merry way until Midas throws a golden monkey wrench into the works: he wants David to marry his daughter, Abigail (a.k.a. "Princess Bitchytoes"), who as it turns out, is Catherine's alter-ego.

David starts to decline, but Daddy Dearest lets him know that he's a dead man (and Mom's gonna get slaughtered too) if he doesn't go through with it. Ooooh. Shivers down my spine at that forceful whisper. David makes one last trip to see Mom, who guesses the bad news. She tells him to run, get as far away as he can, forget her, forget the farm, find love and have a life - and of course, David can't do that. So Mom gives him her one prized possession - her wedding ring. She tells him where that ring goes, true love follows. Then she kisses her boy goodbye and oh, I just love Ruth. I love her.

We bounce back to Storybrooke, where David is on his way to the Toll Bridge to meet Mary Margaret. He runs into Regina, who helpfully gives him erroneous directions that will take him right past Gold's pawn shop. He steps inside to get better directions and instead runs smack dab into a windmill that finally activates the curse for him, giving him all his false memories with Catherine. He finds Mary Margaret, and tells her he's decided to do the right thing, and work it out with Catherine.

You know that Simpson's episode where Lisa screams at Ralph Wiggum on live TV and Bart videotapes it so she can see the exact moment when his heart rips in half?


That's what watching this scene is like. You can see Mary Margaret's heart shatter into a thousand little agonizing, sharpened pieces and slice her open from the inside out. Ugh.

On the other side of town, Emma is patrolling and sees someone climbing out of Regina's upstairs window. She tackles the intruder, only to find it's Sheriff Mancandy, who's been tapping some mayoral ass. Emma is sickened that he's with Regina, and tells Graham he can work his own damn night shifts from now on.

We end the episode with Mary Margaret, drinking away her broken heart at the counter at Granny's (twirling that ring that belonged to Ruth), vulnerable and easy prey for the town's resident lothario, Dr. Whale, who swoops in for the kill while David is sliding his arms around Catherine, full of memories, but still not exactly feeling the love. 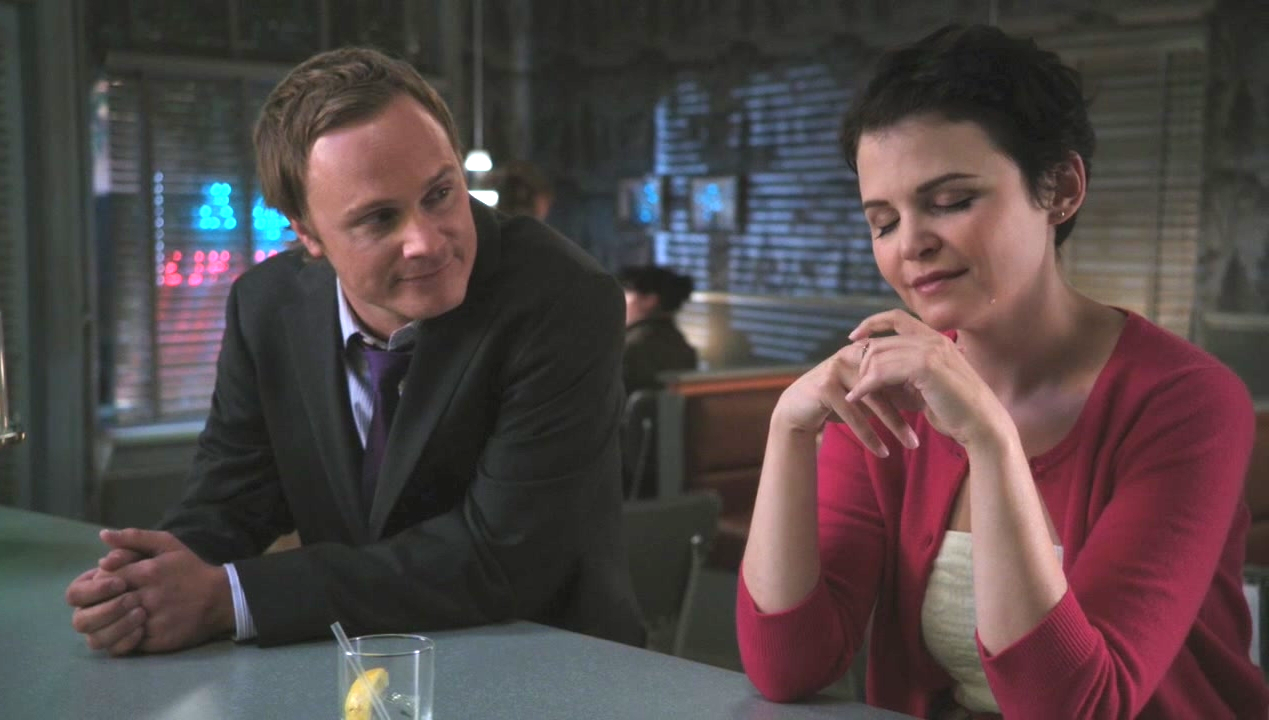 Damn, was this season good for storybuilding. The little nuances, the fantastic casting, the great little seeds that they plant to call back to later...it's just amazing.