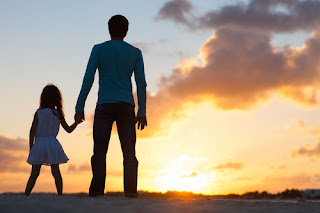 I was just 18 years old, and it was a week before graduation. In a few short (though they’d feel like an eternity) months, I’d be off to college and out of that podunk town. No more ridiculous rules enforced by my stifling parents. No more watching every word I said, everything I did, and being the daughter I was supposed to be, just so I don’t make waves.

The clock was counting down, and I knew my parents could feel it just like I could. My Mom reacted in her usual, smothering way. She wanted to know every facet of every part of my life, as always, and I kept her at arm’s length, as always. Dad was another story. Grim, tense – it was like he expected me to strip my way through college, drop out a month in and join a motorcycle gang. He wanted me attending the college in our town (if I had to go to college at all), and living at home. I didn’t even apply there. Instead, I applied and got accepted to a university on the other side of the state, five hours and a whole new life away.


My Dad wasn’t ever the nurturing type. While my Mom was known for her screwball sense of humor and over-the-top dramatics, Dad was her total opposite. Quiet, serious, usually with his face buried in a book when he wasn’t at work. My friends nicknamed him “The Vulcan”, and they weren’t far off the mark. He wasn’t humorless, entirely, though. Sometimes he’d make a rare remark or make a gesture that spoke volumes. His wit was dry and intelligent and even more hysterical when it hit for being so unexpected. I hadn’t seen any of that in months, though. Once I started X-ing days off the calendar on my wall to countdown my leaving, he turned surly. It was hard, because I was Daddy’s little girl my whole life, but I was grown now, and not a little girl anymore. Did he have to find fault with everything I did lately? Oh, I couldn’t wait to get out of there.

So there I was one night in May standing by the picture window in our living room, watching for my friend Lori’s car to come take us to chorus practice. Mom was at church, and Dad came up behind me to remind me that he expected me home right after practice. Whatever. I rolled my eyes, but he didn’t sit back down. Instead, he stared out the window with me, and his hand somehow ended up on my shoulder. I didn’t move or acknowledge him. Where was Lori? I just wanted to get out of the house, already. He cleared his throat, and in a firm but not especially loud voice he spoke.

“What time is the graduation ceremony on Tuesday?”

I raised my brows, but didn’t turn around. “I figured you would.”

Long pause. He cleared his throat, and his hand tightened on my shoulder.

“I want you to know that your mother and I are proud of you.”

Right. Sure you are. You hate where I’m going to college – hell, Mom hates the idea of me even attending college at all – and you hate what I chose to study. You’ve never said congratulations once to me when I won a trophy or a medal on the speech team, or when our choir won regionals. You didn’t even tell me I did a great job when I auditioned for and won my Theatre scholarships. And now you’re proud of me? Oh, Please.

I sighed after a moment, and squeezed his hand on my shoulder.

He sat back down, put his head back in his book, and I guess he felt like he did his fatherly duty.
An empty gesture. Brownie points on the parental scale, and someday, he could say to himself “Well, I always told my kids how proud they made me”  without ever realizing that words are easy, and actions mean the world, particularly to your kid.

That was a long time ago, and Dad and I have both come a long way, since then. He’s loosened up in his old age, and really found his stride. He laughs easily, and often. He adores his Grandkids, and since Mom died, I see him a lot more, and I love it. The years have changed me, too. I see him now not just for who he is, but for who he used to be. I see him through a parent’s eyes, and that changes the view dramatically.

I know what it cost him that day to tell me he was proud. I know how hard it was for him to stand up, to speak up, and to put it in words. I cherish those words now, in a way that would never have occurred to me then.

When I was four, we met him in Germany, at the airport. He’d just been assigned to a new military base, and finally left his tour of duty in Viet Nam to join us there. I saw him in the waiting area, behind a waist-high gate where they gathered to process the new arrivals. Mom told me and my brothers that we’d have to wait for Daddy to get finished. I didn’t want to wait. This was my Daddy – I knew because I kissed his picture every night. He’d been gone so long, I didn’t remember much else, but there he was, and I couldn’t stop myself. I jumped and I ran and I dodged people trying to stop me and I clambered over the gate and I launched myself into his arms.

The other guys were laughing good-naturedly, and my father tried to hand me back over the gate to my mother, but I wouldn’t let go. The officer in charge told him he could hold me, if he wanted, and I remember him offering me a cookie if I’d go back to Mommy. I said no. I could have a cookie anytime. I wanted Daddy. He held me then, and as I looked back on it over the years, I knew I’d probably embarrassed the hell out of him. My Dad hates to call attention to himself. Mom said he was very uncomfortable and he was probably only holding me to avoid a bigger scene. An empty gesture, but I didn’t care then. I had my Daddy back.

Twenty five years later, I stood with him in front of a long, polished obsidian wall, and watched him as he stared up at the name of his sergeant, a man who didn’t survive the mortar attack that wounded my Dad and gave him his purple heart. He keeps the medal on the back of his dresser, covered in dust, and he doesn’t speak of it. Was an empty gesture to him? A thank you for living when the other guy didn’t?

Last year, I finally asked him about Viet Nam. We stayed up late in the night, talking. He told me that he kissed my picture every night, too. And when he finally landed in Germany, and I jumped into his arms, he couldn’t believe how big I’d gotten, and how much of my life he’d missed. He was uncomfortable holding me, he said, because he was afraid he was going to get emotional in front of the others.

I guess sometimes, an empty gesture isn’t really empty. Its just full of what you don’t see, or can’t face.
By Ellie DeLano - December 12, 2011