This recap begins with my firm assertion that this is one of my favorite of all the episodes, and I can say that so firmly because I'm retro-reviewing this season. Oh, God, do I love Jiminy's backstory. And I love, love, love his parents. This story has it all, love, sacrifice, bitterness, pain, and creepy, creepy puppets.

Jiminy waxes philosophical about the innate goodness and freedom of crickets, and his parents shut that shit right down (with impeccable actorial timing - these two actors are magic together) because he's part of the family racket and that's that.

Which brings us to a thoughtful Henry, who is sitting in Archie's office having his therapy session. He mentions that there are no crickets in Storybrooke, and sure enough, there aren't. Archie wonders briefly why that is before trying to get Henry to figure out why he believes the whole town is full of fairy tale people.

We hop over to the sheriff's station, where Emma is on her first day of work under Sheriff Mancandy.


Strangely, the second Emma puts on the deputy's badge, the town explodes. It turns out an old mining tunnel blew up and Regina steps forward to give the crowd a reassuring speech.

Regina finds out the Sheriff Mancandy has now hired deputy Emma, and her look promises retribution. Naked, prolonged, painful retribution. I would pay money to see a video of that.

Henry lets Emma and Archie know that Emma is the reason the tunnels blew open - there's something down there and the town is changing because she's decided to stay.

Regina, meanwhile, seeks out Archie and tells him that she's tired of him catering to Henry's delusions about fairytales. She orders Archie to smack Henry with some cold, hard reality or she's going to crush him like a bug - metaphorically speaking.

Back in the Enchanted Forest, Jiminy's parents have gotten older and Jiminy is still working with them, clearly unable to quit because they guilt the hell out of him every time he tries to. The parents have decided to run the "elf tonic" scam, pandering to people's fears by claiming there's a plague coming and only the elf tonic they sell can cure it.

Jiminy then meets a precocious boy who happens to love crickets. It starts raining and the boy gifts him with an umbrella just because he's a really nice kid.

Flash forward to Storybrooke, where Henry lets Archie know that he wants to go in the tunnels, equipped with his backpack and a whole lot of candy bars he must have found on the ground when a plane crashed nearby.

Archie jack-smacks him with a dose of "hey kid, you're crazy' and Henry runs off, clearly distraught.

Then we move over to the hospital, where Mary Margaret and David are having the world's most adorable game of hangman. This is another of those scenes where you can really see things twinkling between Ginny and Josh and I just feel all warm and gooey after it.

Mary Margaret then commiserates with Emma about her feelings for David, and Emma cautions her not to fall for a married man - it's not worth the heartache. She then adds the words, "Trust me" which probably means sometime a few seasons down the road, we may see the married man Emma once fell for. That's too juicy a tidbit to just throw away.

Emma is interrupted by a sobbing Henry, who just came from Archie's. She races down there, breathing fire and tears Archie a new one for not listening to his conscience and being nicer to Henry.

Over in the Enchanted Forest, we see Jiminy getting a special potion from Rumplestiltskin that will free him from his parents forever. He only has to get them to drink it or splash it on them, and leave their bodies for Rumple to collect. He takes the potion reluctantly, but he takes it. 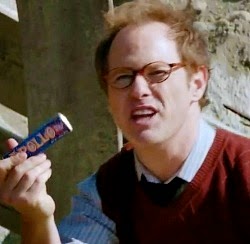 Back in Storybrooke, Emma and Archie have traced Henry via his Dharma Initiative candy bars  and they realize he's in the tunnel. Suddenly, the tunnel begins to collapse, and Archie bravely rushes in instead of running away. He ends up getting trapped with Henry.

Flash back to the Enchanted Forest, where we see Jiminy and his parents, who are about to visit their scam on a young couple in one of my all-time favorite scenes from this show.

After the con goes down, Archie turns on his parents, throwing Rumple's potion on them - only to find out they turned the tables on him, and switched bottles. The young couple took whatever Rumple gave him, and he rushes back inside to find they've been transformed into horrible, creepy marionettes.

Back in Storybrooke, people are sitting around on car hoods and carelessly moving one stone at a time from the collapsed mine entrance, and we see Regina and Emma get into it over who's fault it is that Henry went down there in the first place. And in this moment, we see some real (and beautiful) vulnerability from Regina, who clearly, clearly loves her son. She and Emma agree to work together for the first time and for the good of Henry. Archie and Henry, meanwhile, have found an old service elevator shaft, and are trying to get out to the surface.

On the other side of town, Mary Margaret is leaving her volunteer shift and runs into David, who asks her to take a walk with him. David confesses that he's been lying to Catherine about remembering any part of his old life with her, and nothing seems to feel 'real' - with the exception of Mary Margaret. She's the only thing that feels right. 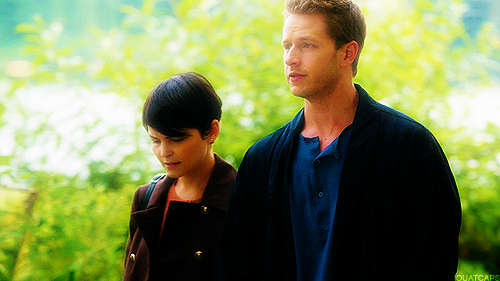 Awwww. God, right in the center of my chest. I love these two. Just love them. So perfectly cast. Catherine shows up to rain on their moment, and Mary Margaret walks off, clearly uncomfortable with the situation.

At the mines, any and all attempts to blow open the entrance have failed, and Regina is beside herself. Pongo catches Archie's scent, and leads them to the opening to the elevator shaft that Henry and Archie are sitting in.

Archie finally searches his conscience and tells Henry that he doesn't think he's crazy, but he also thinks that Henry should cut Regina a break, because she does what she does because she loves him. I think it's wonderful that Archie can see the real Regina before anyone else can. Henry reminds Archie to listen to the voice inside of himself, and be who he was meant to be.

Up on the surface, Emma gets lowered down into the shaft, and rescues Archie and Henry, showing off her incredibly toned and defined arms. Archie nearly dies, but manages to save his own ass in a really Disney way. They're all pulled out into the light, and Henry is enveloped in Regina's arms and rushed away as Marco (aka Gepetto) hugs his best friend, Archie.

Regina thanks Archie, who suddenly sprouts a set of brass balls and tells Regina he's going to keep treating Henry, and he's going to do it the way he wants. He further assures her that if she won't let him, he's going to end up testifying at her custody battle, and it won't necessarily go well for her. Go Archie!! 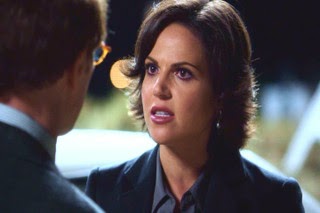 Flashing back to the Enchanted Forest, we see Archie after the disastrous puppet scam, where he's met the Blue Fairy. He asks her to bring back the boy's parents, but she can't. She does tell him that the boy will need help growing up and Archie tells her he can't get away from his parents. They're "who he is." Blue asks him what he'd really like to be and the sound editors overwhelm us with a plethora of cricket sounds.

I like that word, plethora. I so rarely get to use it in a sentence.

And we end back in Storybrooke, where Henry notes that the crickets have now come back. Things are definitely changing in town.

We fade out in a montage of crickets, creepy puppets in Mr. Gold's shop, laughing rescue workers, Mary Margaret turning in her resignation at the hospital (sniff!), and Regina, finding a shard of the coffin she'd entombed Snow White in, clearly unearthed in the explosion. She drops it down, down, down, to the bottom of the mine, where it hits the rest of the coffin.


I'll give this episode five blue wishing stars out of five.

Like I said in the intro, this episode had it all.