On Mothers And Daughters 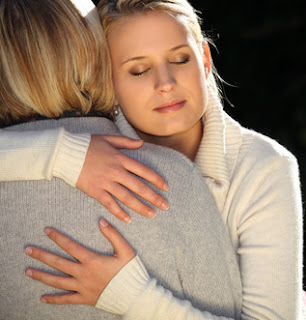 My whole life, I just wanted my Mom to respect me for the person I was.

I used to make a joke with my friends - I'd tell them that if you put my Mom in a room with me and a hundred other girls my age and told her to pick her ideal kid, it wouldn't be me. Ever. Not that I had a bad childhood, mind you. My father always had steady work, we always had food, clothing and shelter. My Mom and Dad loved me, and I never doubted that. I just frequently wished they didn't love me quite so much. I was relatively sheltered, mainly due to my strict father and my evangelical Southern Baptist mother.


I guess the problem was that I never was the daughter my mother expected to have. She expected to have a daughter that was as close to her as she was to her mother. Mom grew up depending on her mother for everything, until the day she left her parent's home to begin her own with my father. She called my grandma every week, wrote her nearly every day. They were as close as two human beings could be, I think.

I vividly remember the day my Grandmother died and how my Mom looked as she sat at the kitchen counter with the phone in her hand, shaking, soundless, unable even to cry, her grief was so deep. I remember how scared I sounded when I called my Dad and told him to come home, my eyes on my mother as she sat, arms wrapped around herself, shaking and rocking. I didn't know what to do. I got off the phone and put my arms around her. She pulled me into her with a grip that was nearly painful, but I didn't care. We held each other fiercely and finally the dam broke and she fell apart in great, racking sobs. In that moment I wasn't the daughter she ended up having. I was the daughter she needed - flesh of her flesh, part of her and my grandmother and all who've gone before me, moving on and carrying immortality within me.

Mom and I continued our love/resentment relationship for all of my teen years. I was a Daddy's girl through and through, and no matter how she pushed or pulled, it only made me want to distance her more for the sheer desperation of her need for me. Why couldn't she be more relaxed like Dad? The best memories I have of her are when it was easy: Sunday afternoons when the local channel played the great Hollywood musicals and we sat and watched Gene Kelly and Fred Astaire and Debbie Reynolds and sang, sang, sang, much too loudly and much to my father's chagrin. Saturday nights she'd pop popcorn in the big spaghetti pan and we'd all watch Star Trek and she'd count as I threw popcorn in the air and caught it in my mouth. She tried to do it a couple of times, but once her dentures flew out and the dog grabbed them up, and we all had to chase him around the house before he dropped them to cower behind the chair. I remember telling her at bedtime that my stomach hurt from laughing and she said "There's no medicine for that, because that is the medicine."

So I moved on to college, and my first visit home did nothing to forward my acceptance there as an adult. I remember that first evening I looked up an old high school friend. As we headed out the door, my Mom said "Be back in this house by eleven." I gaped at her in utter disbelief. I'd been living on my own at college for over three months, coming in when I pleased. I was eighteen! What the hell???? She took one look at my face and said "This is still my house, and as long as you're here, you'll abide by the rules." I made a vow then and there to limit my visits as much as possible, and I did. I stayed for summer sessions, worked through spring breaks. I didn't make a visit home from school that lasted more than four days after that.

It was once such visit that changed things for me. It was my senior year, and I was a month or so away from graduation. We both knew I'd be leaving right after - I had a performing job lined up across the country, not too far from where my boyfriend (who would become my husband) lived. It was pretty clear that I was going to be gone for good. Mom and I were out shopping and it was close to lunchtime and she suggested we stop at Long John Silver's for a bite. We slid into a booth, deep-fried chicken sticks, cole slaw, fries and all and started making small talk. Before I knew it, we were swapping anecdotes about our lives, and the people we knew, laughing until we choked on our sodas, just catching up and enjoying each other's company and I suddenly realized: she could just as easily have been any one of my girlfriends in that moment, or I hers. We weren't on the defensive with each other, setting boundaries and determined to keep each other in our places. We were just us, two women out for lunch and laughing like loons as everyone in Long John Silvers looked on. I'd never really thought of my Mom as much of a person before. I felt a stab of shame as I wondered if she'd come to this same realization years before, but I'd been too busy keeping the wall up to notice her.

I hugged her goodbye the day after college graduation, and drove three thousand miles away to my new job and my new life with my boyfriend who would eventually become my husband. We saw each other exactly three times in the next twelve years. In 2001, I watched her hold my five month old daughter and I looked at her through totally new eyes. Having a child fundamentally changes who your mother is to you, forever. I laughed as she rubbed her chin against my Anna's saying "You have my chin! Give it back!" Anna laughed, too, and both their bright blue eyes sparkled. I will cherish those weeks of memories always.

It was Christmas Night, 2002, and I sat with a phone in my hand. I couldn't speak. I shook, and I rocked, and I tried, oh, how I tried to process what I was hearing. Somehow, the phone left my hand - I guess my husband took it. I remember looking up from the floor and seeing Anna toddle over to me. She looked at me curiously, then wrapped her arms around me and I pulled her in, holding her fiercely. The dam broke and I cried and cried and cried. My mother was gone. My mother was gone, but not gone for always. I was holding part of her, holding life itself, feeling a beating heart against mine. The culmination and continuation of her grandmother and me, in perpetuity.