It's A Hard Thing To Watch, When A Life Deconstructs 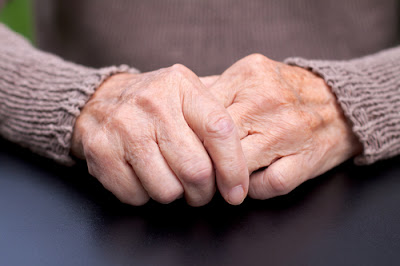 "Evelyn, you don't drive, honey. You're at home. I drove you here. Remember?"

My mother tried in vain to help Evelyn remember what she couldn't. It happened on a daily, almost hourly basis.

"I need my keys!" she said again, vehemently. Then her head swung toward me. "She took them! I saw her rummaging through my drawers!"

I glanced at my mother, my eyebrows raised. I hadn't left the room since we got there, just a few minutes before.


"Evelyn..." my Mom began, but Evelyn just got up without a sound and headed back to her bedroom.

"I'm tired!" she yelled over her shoulder. And that was the end of the visit.

Evelyn was a Sunday School teacher once, many years before. She was an older lady who lived alone in a tiny, beat-up trailer right behind our church. At first, I just lumped her in with the rest of the gaggle of my mother's friends who were, in truth, a bunch of gossipy old biddies. Evelyn seemed nice enough, but I didn't pay her much attention till she asked me about the play I was in.

"Our Town! Why, that's one of my all-time favorites! I was Mrs. Webb during my run, but that was a long time ago, Starlet."

She called me "Starlet", knowing how much I loved to perform and longed to go to college to study Theatre. Unlike my Mother, she didn't think that was a stupid idea. The story of her life came out in many conversations, some with me directly, some with my Mother, but overheard by me.

She was a hand model in New York, and once had a wild night at a bar with Jackie Gleason. She did some theatre, traveled a bit around Europe, married a reasonably wealthy man and had a couple of kids. She wore braces on her legs because her husband's Haitian mistress (who happened to be their maid) tried to poison her with arsenic, resulting in damage to her joints.

The maid was deported, then the husband left Evelyn anyway, and died of a heart attack not long after. The kids blew through their inheritance and had no money or patience for taking care of their Mother. She lived on her own, rabidly self-sufficient to a degree despite her disabilities. She was unlike any woman I'd ever known at that point. A real career woman, who'd traveled the world. I drank her stories in with a thirst my Mother most definitely had a problem with. I didn't care. Evelyn had seen the world, and I longed to see it through her eyes, until I could leave and see it on my own.

I grew up, graduated high school, and headed off for college. Evelyn wrote a few times, then the letters stopped and I never questioned why. I was too busy with my new life away (away!) from home. Mom had mentioned here and there that Evelyn was "having problems", but I didn't bother to dig deeper or inquire further. She was old. And disabled. Of course she had problems. I saw her every now and then on my visits home from college, usually to run her to the grocery store, like we were doing that day.

The door to her bedroom slammed shut, and I heard her screaming at us - screaming everything she wanted to scream to our faces, crazy things about us taking her stuff and trying to kill her. I turned my wild eyes to my Mother, who stood motionless in the shabby little living room of Evelyn's trailer, her anguish written on her face.

The time had come. A life, so carefully constructed, now deteriorating to the point of collapse. We'd be heading to the Pastor's house after this, to talk to him about getting Evelyn moved to an assisted care facility. Mom straightened her shoulders, called out goodbye, and we headed to the door.

Suddenly, the bedroom door opened, and Evelyn came flying out, tripping because she forgot her crutches. I ran forward to catch her before she fell.

"Starlet," she said, her hand clutching my arm. "Drive safe, now. You hear me?"

She hugged me, holding on a long time. Then we turned to go, and she stood, half-leaning on the chair for support, silent and listening to the echoes that only she could hear.
By Ellie DeLano - November 05, 2011