Once Upon A Time - Season 1, Episode 2 Recap: Oh, The Bitchfight Is ON.

I loved the opening of this episode - and since I'm reviewing this season retroactively, I can tell you it's still my favorite episode opening. The use of Cat Stevens "Don't Be Shy" just sets the mood beautifully. A new day is dawning in Storybrooke, and it shows.

Regina begins the episode by confronting Henry about the missing pages in his story book just as the clocktower bell rings, and the fear on Regina's face is palpable. She shows up at Emma' room with a basket of apples, only to find out that Emma is hanging around.

She puts a nice face on to cover her cold bitch heart, but Emma doesn't buy a bit of it, setting the stage for what is sure to be an epic rivalry. The chemistry between these two is amazing and the screen practically crackles when they occupy it together.

Meanwhile, back in the Enchanted Forest, Prince Charming lobs a gravity-defying sword at the Evil Queen for harshing his happy on his wedding day, and we see Regina having a drink with her old buddy, Maleficent. They discuss an especially dark curse that Maleficent happens to have in her possession - and Regina wants it back. They have a magical fight full of mediocre CGI and really oddly lit green-screens that make their flesh glow in a sickening, bilious way, but Regina wins out and gets the curse.

Maleficent warns her that all power comes with a price, and this curse comes with an especially terrible one that will leave an emptiness inside her. Regina shrugs her shoulders and decides to have a bonfire with her friends, who look like they escaped from a bunch of B-grade horror movies. She needs a lock of hair from each of them because they have the darkest souls, and I have no idea why this is because a later incarnation of this curse requires no such thing.

So we'll chalk the later omission of this part up to plot convenience and move on. Regina tries to use the heart of her prize stallion, because the curse requires the heart of the thing you love the most. It doesn't work, and the Evil Queen is thwarted.

Meanwhile, back in Storybrooke, we find out Emma's backstory, courtesy of Sydney Glass, editor of The Storybrooke Daily Mirror - a tabloid-esque newsrag that's obviously under the mayor's control and is currently running a smear campaign against Emma, who, it turns out, had Henry while she was in Tucson, and grew up hard, jaded and in and out of the foster care system.

Emma is on her way out of Granny's but finds herself the recipient of a cup of cocoa, courtesy (she thinks) of one hot sheriff. She assures him that while, it's great that he guessed she likes cinnamon on her cocoa, she's not here to flirt. 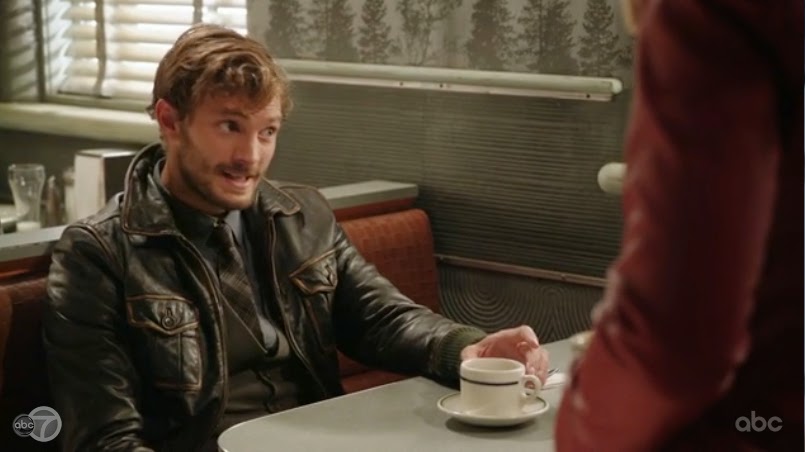 Storybook characters in real life? I can accept. Evil queens casting freakish CGI spells? No biggee. Evil and sorcery and dark curses? Bring 'em on. But I simply refuse to suspend my disbelief far enough to accept that she'd shut this guy down. Ever.

It turns out, though, that the cocoa came from Henry (who likes cinnamon, too - what a coincidence). Henry enlists Emma in what he calls  "Operation Cobra", their secret mission to reconnect all these boring, everyday townspeople with their true fairytale selves.

Henry explains that everyone has been stuck in a cursed town, oblivious and un-aging, and according to him, he and Emma now have the advantage. The evil queen doesn't know Emma is the savior, and the daughter of Snow White and Prince Charming. Henry gives a great line:

"I know the hero never believes at first." And we all know this is going to turn out to be prophetic.

Emma talks to Mary Margaret and runs into the first incidence of someone not being able to remember things being any other way - and it obviously spooks her. She also discovers that Mary Margaret is (according to Henry) Snow White - aka her mother - and we see that sink in, obviously disconcerting Emma, especially since Mary Margaret has made such an overture of friendship toward Emma and toward Henry.

Emma moves on to Doctor Hopper, who is Henry's therapist, and he gives Emma Henry's file, telling her to read it. It turns out the good doctor set her up, and Sheriff Mancandy shows up to arrest her for stealing the files. He slides the cuffs enticingly over her wrists (a foreshadow of roles to come for actor Jamie Dornan) and he escorts her to the station, where he's about to throw her in jail. Luckily, Mary Margaret shows up to bail Emma out because for some strange and vaguely niggling reason....she trusts her.

Emma then finds herself a chainsaw and cuts down part of Regina's prize apple tree and the bitchfight is ON. Oh, so so SO beautifully bitchy. I can't stress enough how much I love these two going at each other. 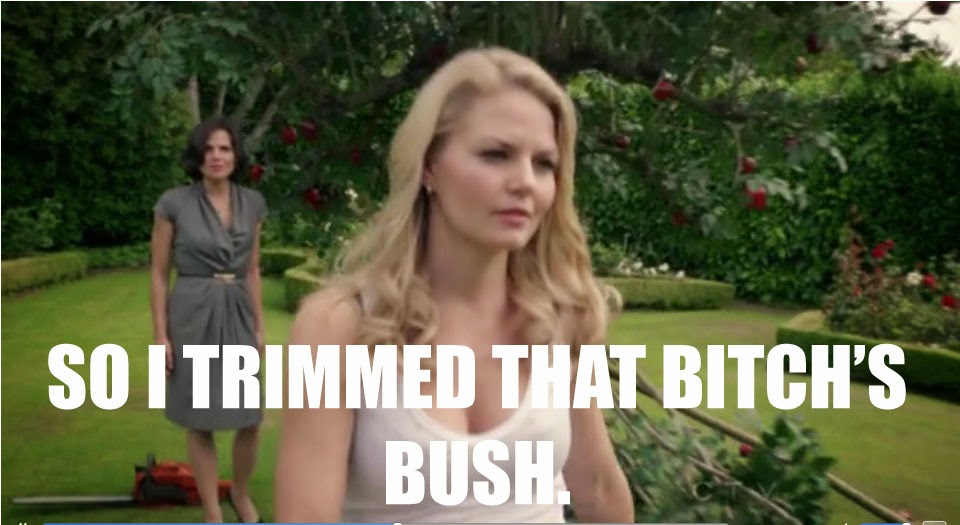 Regina seeks out Rumplestiltskin, the originator of the dark curse she's trying to cast, and he makes a deal with her - he'll help her cast it if she grants him an easy life in the new land, and agrees to do whatever he asks, so long as he says the word "please." She agrees and he lets her know she needs to use a more precious heart. A heart that really matters.

It's clear that he wants her to do this, and is even looking forward to it - despite this being a truly horrible curse. Hmmmmm.

Back in Storybrooke, an uncomfortable Granny kicks Emma out of her room due to Mayoral decree, and Sheriff Mancandy calls Regina on her nonsense, showing that he's getting wise to the mayor's machinations. He reminds her that none of this enmity is good for Henry, and we see - clearly - that Regina is fighting for her son. This is one of the more beautiful things about the writing on this show - even when a character is doing a very wrong thing, we can often see that they're doing it for a good reason. In this case (and in a lot of cases as the show goes on), it's love.

Regina lures Emma in, offering a peace talk that turns out to be another setup. Emma tells her that Henry is sharing crazy stories about fairy tale characters, and Henry overhears, just as Regina intended. He runs away, clearly upset that Emma thinks he's "crazy."

We then see Regina back in the Enchanted Forest, torn with vengeance over whatever wrong it was that Snow White did to her (we have yet to find out the specifics), is confiding in her father the depth of her hatred and despair. He encourages her to let it all go and move on, but she chooses instead to rip his damn heart right out of his chest (in the magical Enchanted Forest, the heart comes out glowing and looking like an overlarge, heart-shaped gem) and Daddy dearest hits the dirt.

Emma stops by to see Mary Margaret in order to repay the bail money, gets invited in for cocoa and guess what? Mary Margaret likes cinnamon on her cocoa. 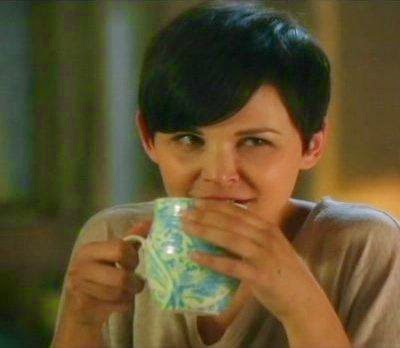 Freaky, huh? The two have an obvious, instant connection, and Mary Margaret functions like a conscience for Emma, helping her realize that she needs to stay in Storybrooke - for Henry.

Emma storms into Henry's therapy session, tells Dr. Hopper to get out of her face, and tells Henry that he's not crazy - the curse is crazy - but that doesn't mean it's not true. She's still in on Operation Cobra, and she's only acting like she thinks this is crazy to throw off the evil queen. Henry is all smiles, and they're back on track. Henry think she's on board, and Emma has bought some more time to find out if all this is just a schizophrenic manifestation of her kid's abusive upbringing. Nice.

Back in the Enchanted Forest, Regina tosses Daddy's heart on a fire and casts the magical, swirling CGI curse. She stops by Daddy's grave to reassure him of her love (despite her narcissistic, murderous tendencies), and we discover that Henry was named for his grandfather.

We end the episode with Mr. Gold stopping by to visit Regina, who thinks she's gotten rid of Emma, only to find out (from a quietly gleeful Gold) that Emma is still hanging around and walking around town with her son. Gold offers to help her get rid of Emma - for a price. He drops a few hints that make us wonder if he's exempt from the influence of the curse, and we find out that he's the one who arranged Henry's adoption. Regina demands to know what he knows about Emma, but he sidesteps that by asking her to excuse him...please...in a delightfully creepy, calm voice. 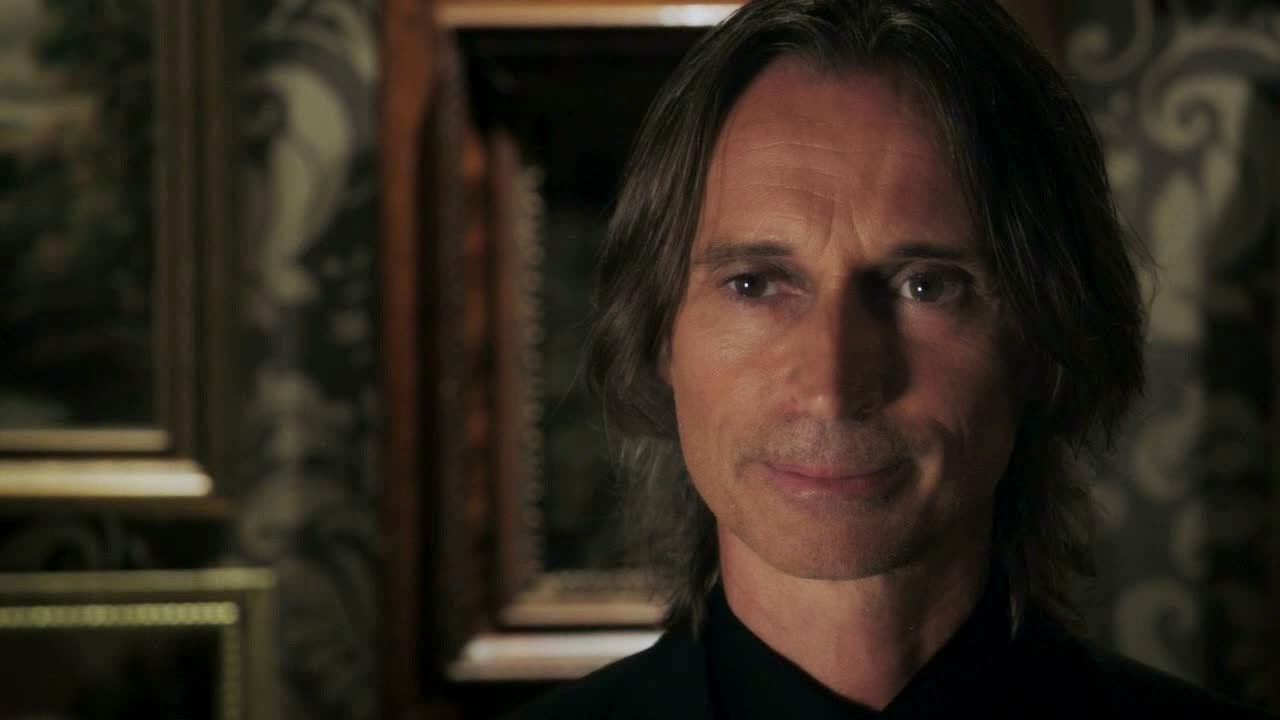 Oh, God, do I love Bobby Carlyle. This man a consummate actor, a master of facial expression and body language, a virtuoso with the spoken word, stands five foot seven inches tall, and five foot, six and a half of it is pure, hot sex. Damn.

I'll give this episode four blue wishing stars out of five.

I loved everything about this one, other than the crap CGI. Also, the green screen does very odd things to the actor's skin, and it's jarring. I get so wrapped up in the fabulous performances and the clever plot twists and then blammo - it's like we're on a bad Disney teen show. I think Wizards of Waverly Place might have a larger budget for special effects, from the look of things.