Once Upon A Time - Season 1, Episode 1 Recap: Iconic and Irresistable 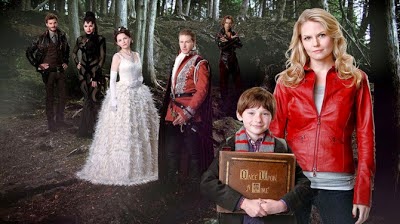 We open with one of the most iconic scenes in all of fairy tale lore: Prince Charming awakening Snow White, and I want to say now that the triad of Snow White, Prince Charming and The Evil Queen are perfectly, perfectly cast. They look great, they sound great, and the costumes and settings behind and around them are beyond gorgeous.

We flash ahead to Henry, a little boy of ten, seated on a bus and reading through a very old story book that detailed the very scene we just witnessed. He gets off the bus and gives a taxi driver a credit card, so we can only assume he's out and about on this adventure all by himself.

Now we meet Emma – hot, sexy Emma with the sad story of a hard life who turns out to be a ballsy broad and a bail bondsperson, much to the chagrin of the cheating scum she just apprehended – in five inch stiletto heels, no less. You go, girl. She ends the date by beating her target's face into the steering wheel of his car, which, in later episodes will mean that she really likes him, but there I go foreshadowing (since I'm reviewing these retroactively…)


Emma puts a blue star candle into a cupcake and makes a birthday wish (effectively "wishing upon a star') and suddenly, Henry is at the door, claiming to be the son she gave up for adoption ten years before. He begs her to come home with him to the little town of Storybrooke, and of course, Emma balks. He threatens to claim that she kidnapped him if she calls the police, and Emma reveals her superpower: she can sense when anyone is telling the truth – or not. She finally agrees, and off they go.

Back in the Enchanted Forest, Snow and Prince Charming decide to meet with the mysterious "him" in order to find a defense against the evil queen. "He" is mentioned with a sense of foreboding usually tied to the name "Voldemort", but for their baby, they're going to do it anyway.

"He" turns out to be Rumplestiltskin, magnificently portrayed and creepy in the extreme. Good God, the casting agent for this show deserves an Emmy. Seriously. This is sheer perfection. 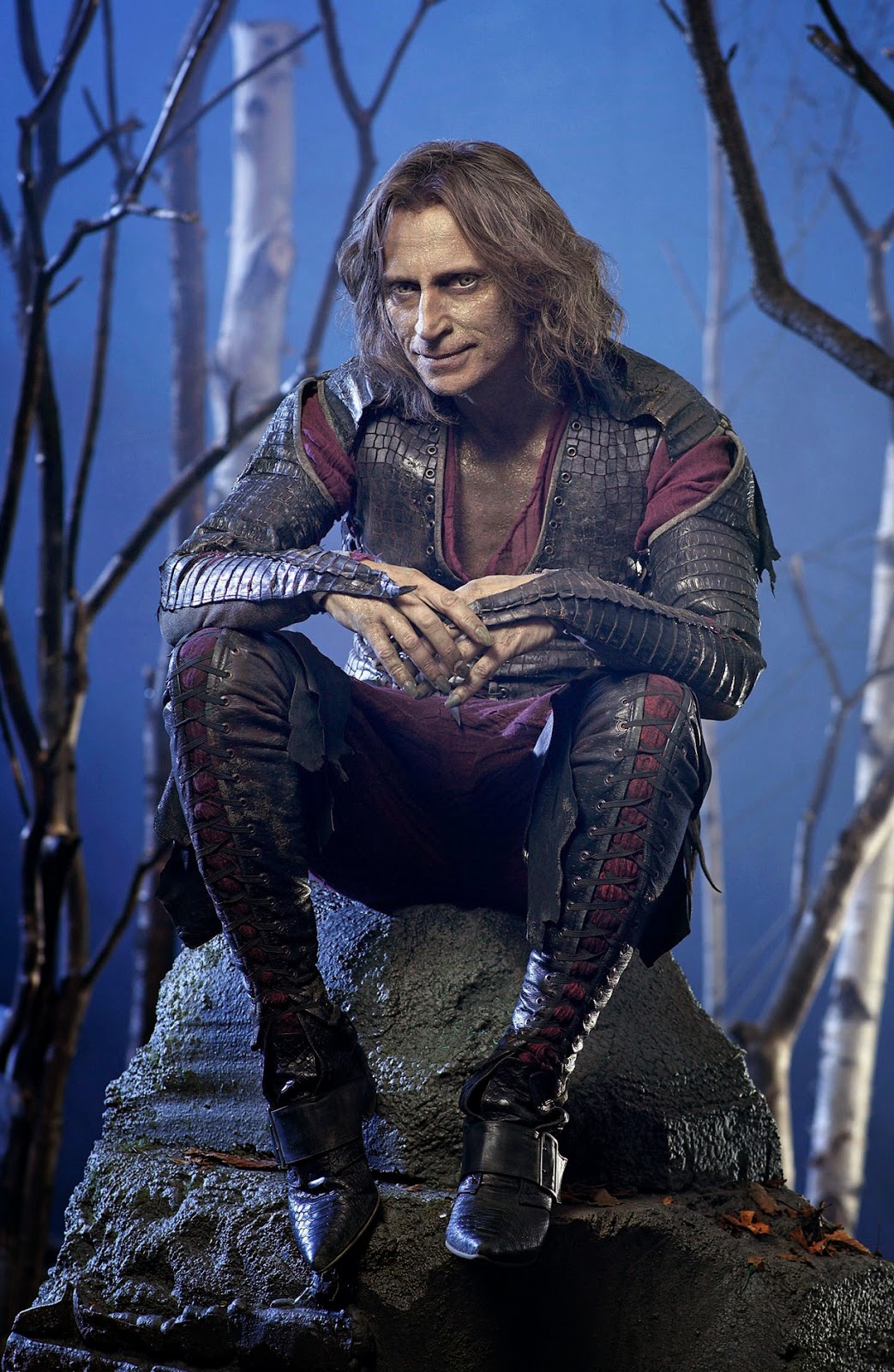 Rumplestiltskin agrees to help them in return for the name of their unborn child. He tells them of the queen's plan to unleash an evil curse that will freeze them in time in a place with "no more happy endings," no doubt inspired by the Disney movie "Enchanted."

There's a loophole, however. If they send their baby away, on her twenty-eight birthday, she'll return and save them all. Snow keeps her end of the deal, passing over the baby's name: Emma.

And now we arrive in Storybrooke, a town that looks like it's had a remodel in decades. It's quaint and dank and chilly-looking, and Henry points out the clocktower, upon which the hands are stuck firmly at 8:15, (an homage to LOST, a show that creator/writers Kitsis and Horowitz previously worked on). Henry claims it's because the town is frozen in time.

Emma discovers through a run-in with Henry's therapist, Dr. Hopper, that Henry is the mayor's kid. Dr. Hopper is revealed to be Jiminy Cricket (along with his dog, Pongo – the first of what will be many story mashups on this show) and Henry lets Emma know that everyone in town is a story book character, but none of them know who they are.

I have to stop here and say, what a f---king AWESOME premise. Still blows my mind. Love it.

We segue over to a scene in the Enchanted Forest, where a council headed by the Blue Fairy (and featuring various fairytale characters) decides to make a wardrobe of enchanted wood that can act as a portal to another realm, thereby saving Snow White and her unborn child since the wardrobe can only hold one.

Back in Storybrooke, Emma meets the mayor and the ungodly hot sheriff-and-underwear-model, Graham.
Henry's mother the mayor turns out to be our evil Queen, Regina, who is cordial and even friendly, offering Emma - of all things - apple cider. Emma lets her know that Henry believes in his fairytale book and he thinks the town is full of fairytale folk and that makes Regina's eyes widen just a leeeetle bit. Emma takes off in her yellow classic VW bug, but never makes it out of town, swerving to avoid a wolf and slamming into a big old rock.

Meanwhile, Snow White is having some serious angst about the fact that she'll be signing up for her AARP card by the time she's reunited with her still young and virile prince. She goes into labor and of course, the timing couldn't be worse – the curse is here.

Back at the sheriff's station, Emma is in a jail cell (next to Grumpy the dwarf who's whistling while he lazes) and we get another good eyeful of Sheriff Mancandy Graham. Henry has run away, and Emma decides to help Graham and Regina find him. It turns out Henry found her and financed his jaunt with a credit card stolen from Mary Margaret Blanchard.

We meet Mary Margaret, who is Snow White sans most of her hair, and I'm not digging it. I adore the character, and I get the need to make her different from her alter-ego, but the hair is pretty severe and it doesn't do much for her. Mary Margaret gave Henry the storybook, because she thought it was important that Henry have hope.

In the Enchanted Forest, Snow is having her baby – loudly – with the help of Doc the dwarf, and now we have a dilemma – the wardrobe can only take one. Charming is ready to just toss in the towel, but Snow channels her inner mommy-lioness and tells him to put the baby through, to give her "her best chance." She sobs as though her heart will break (and I think mine did, a little) when Charming runs off, baby in one hand, sword in the other, to fight everyone in between him and that wardrobe. He's gravely wounded, but he puts baby Emma through with a whispered, "Find us…"

Excuse me. Serious lump in my throat, here.

We go back to Storybrooke where Henry valiantly tells Emma that she should go. He's afraid for her. He reminds her that it's her destiny to be here, but she's in danger. Emma and Henry share some bonding time and he reveals that her parents are Snow White and Prince Charming, which, of course, Emma doesn't believe for a moment. He begs her to stay for just one week. His life sucks, his Mom doesn't really love him, and the town is repetitively stuck around him. Emma confesses her own hard life growing up in the foster system. She gives him a patronizing smile and ushers Henry back to his mother.

In the Enchanted Forest, Snow drags her uterine-hemorrhaging self over to her husband's lifeless body, Regina stops by to gloat fabulously in her gorgeous sequined dress, and the curse takes them all.

Emma returns Henry to Regina, and she confesses that Henry showed up right after she made her birthday wish. Regina -who knows full well that the magic of a birthday wish is not to be brushed aside - is not standing for that nonsense. She takes the gloves off and tells Emma to shove it because Henry has a mother, and she's not welcome here. She's authoritarian and tyrannical and bitchy, and Emma isn't the kind of girl who deals well with authority figures. She's got her back up now and she's going to stay just to spite Regina.

We wind it up with Mary Margaret, working her volunteer shift at the hospital, and putting flowers at the bedside of a "John Doe" coma patient, who turns out to be her Prince. Emma, takes up residence at Granny's boarding house. She gives her name, and right behind her appears "Mr. Gold", aka Rumplestiltskin, who find her name to be fascinating for some reason. He seems a charming fellow, in a creepy sort of way. He's also obviously a very feared man.

And as the episode ends, we finally see the hands of the clocktower move, and Henry smiles.

This show had me hooked from the very start - a smart premise, phenomenal casting, a kid full of heart, and the endless need to prove that true love wins out in the end.
By Ellie DeLano - October 24, 2011